Pleats and high waist pants are finally coming back into the minds of everyday people, being present at Pitti Uomo and other sartorial gatherings. Fashion isn’t always new, with discerning gentlemen always looking toward the golden age of menswear (1930-1960) for inspiration to their latest suits. B&Tailor has started offering a certain style of trouser that instantly screams 1940-1955: the drop loop pant.

What Is the Drop Loop Pant?

Here is an example of “dropped belt loops”.  Note that these belt loops are thin and cross the waistband of the trouser.

These pants were traditionally worn with high-rise trousers and rose in popularity during the 1940s before reaching their peak in the 1950s.  It’s hard to imagine a swing dance party without these pants! Variants called “Hollywood Waist” trousers were also produced, where the pant would lack a true waistband and boast a seamless stretch of fabric from the top of the pant. 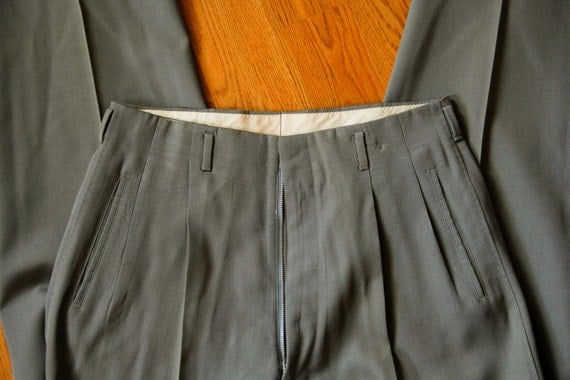 Note that these loops are not “bisecting” any waistband line.  The pant lacks the true, sewn on waistband.

I’m not sure of the background of this pant style, but it was definitely a departure from the norm.  Combined with a thin belt, it really emphasizes the fitted waist aesthetic from the late 1940’s.  Men really wanted to appear broad and to look like they had that inverted triangle figure!  I believe that the dropped pant loops really make the pants look higher than they really are, which adds visual length to your legs and lets you appear taller and slimmer.  I will admit that this detail does make you look like a  sack tied tightly with a string.

Its hard to find these done today even with the resurgence of the high-waisted trouser.  It’s most likley due to the fact that most tailored men don’t like the presence of belts as it ruins the smooth transition from pant to shirt/jacket.  Perhaps that’s why drop loops were so popular in the 1940s-50s: they allowed you to sinch your pants, but the extended nature of the waistband past the belt still allowed for a smooth transition! It also gives you a chance to let your belt shine, whether its crocodile leather or even an all white one!  Here’s some great examples from the Golden Era.

Fred Astaire wore his with a tie as a belt.

An advertisement for drop loop trousers.

Colorful 1950s style, with dropped loop pants on the right!

While the high-rise trousers had indeed returned, note that many gentlemen who use them seldom wear belts. They either have side adjusters or use suspenders, negating the need for a belt.  The Armoury does have highrise chinos, but they have their belt loops in the normal place.  I’ve only found one company that produces modern drop loop pants and that is our friends at B & Tailor.

Here we can see a linen pant, featuring a double pleats and drop-loops.  The loops are a bit thicker than what we saw on the 1940s-50s variants, but they’re pretty awesome regardless! B&Tailor has updated the look with a slimmer leg (minimal taper) to have a straight-slim look, which contrasts slightly with the full, straight leg of the Golden Era.

Also note that these pants lack a true waistband (making them Hollywood Waist trousers), as there is a seamless piece of fabric through the rise of the pant; the belt loops do not cross any visible waistband line.  What a fantastic vintage detail to get right!

B&Tailor does make thicker belt loops, compared to the thinner ones in the 1940s.

As I’ve said in one of my earlier articles, B&Tailor has a definite American vintage flavor to their house style.  They prefer high waisted trousers and broad shouldered jackets with large lapels!

While it may not be widespread yet, it’s refreshing to know that there is at least one tailor out there who is updating a great 1940s-50s detail that you just don’t see anywhere outside of true vintage.  Suspenders are a great accessory to have, as they let the pants drape “from your shoulders” so to speak, but I don’t think that guys will ever stop wearing belts.

I believe that drop loops (with the Hollywood Waist) is a fantastic detail to keep things interesting when you decide to wear a belt instead of suspenders.  With a polo or button-up (sans tie) it definitely gives you an old school cool feeling, just as long as you keep your pants hemmed to the right place.  Other wise you’ll look like a guy in a zoot suit costume.  I don’t have any modern variants, but a handful of my suits (along with Spencer) do have them! Unfortunatey, we don’t take much advantage of the drop loops and usually end up wearing them with suspenders like so: 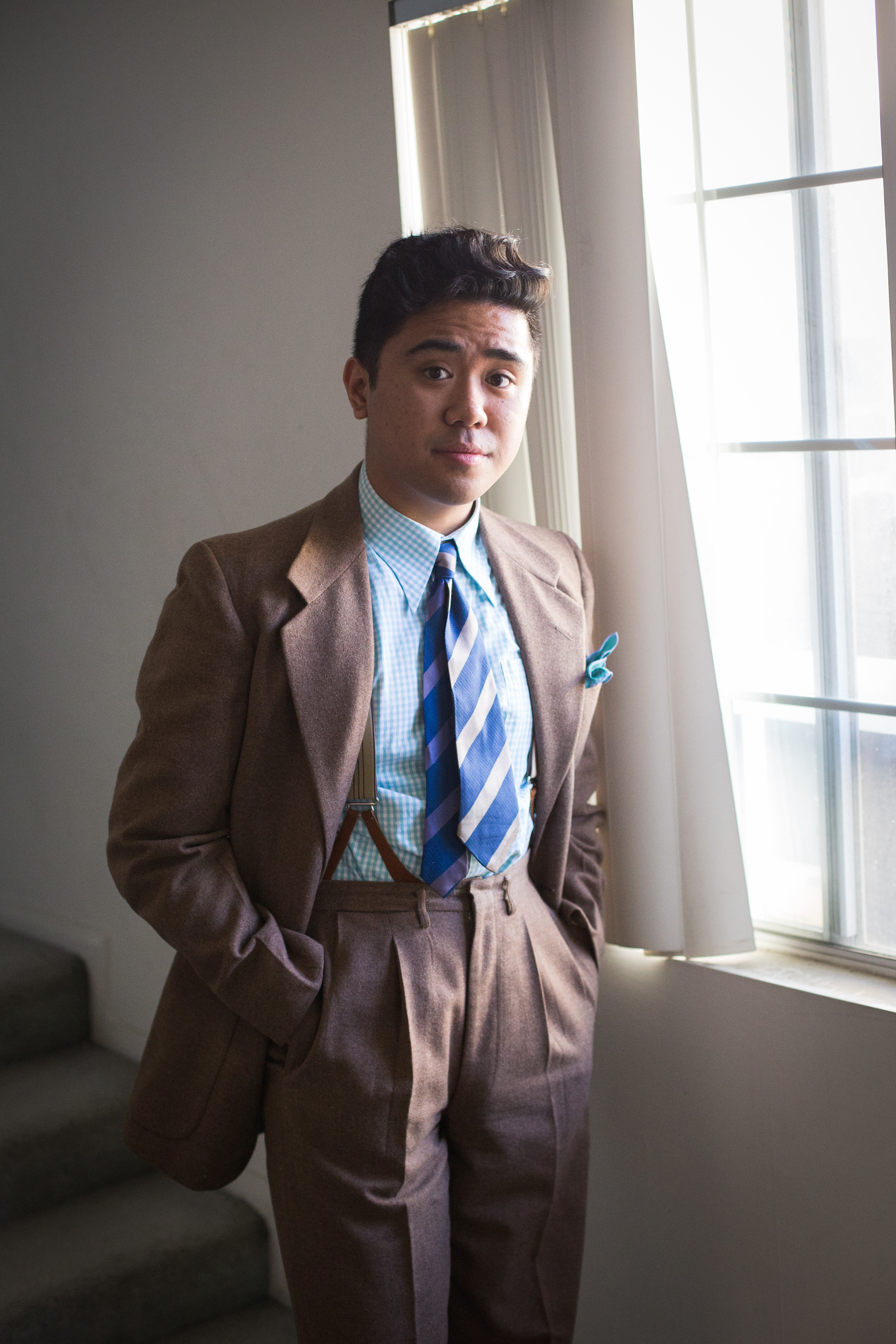 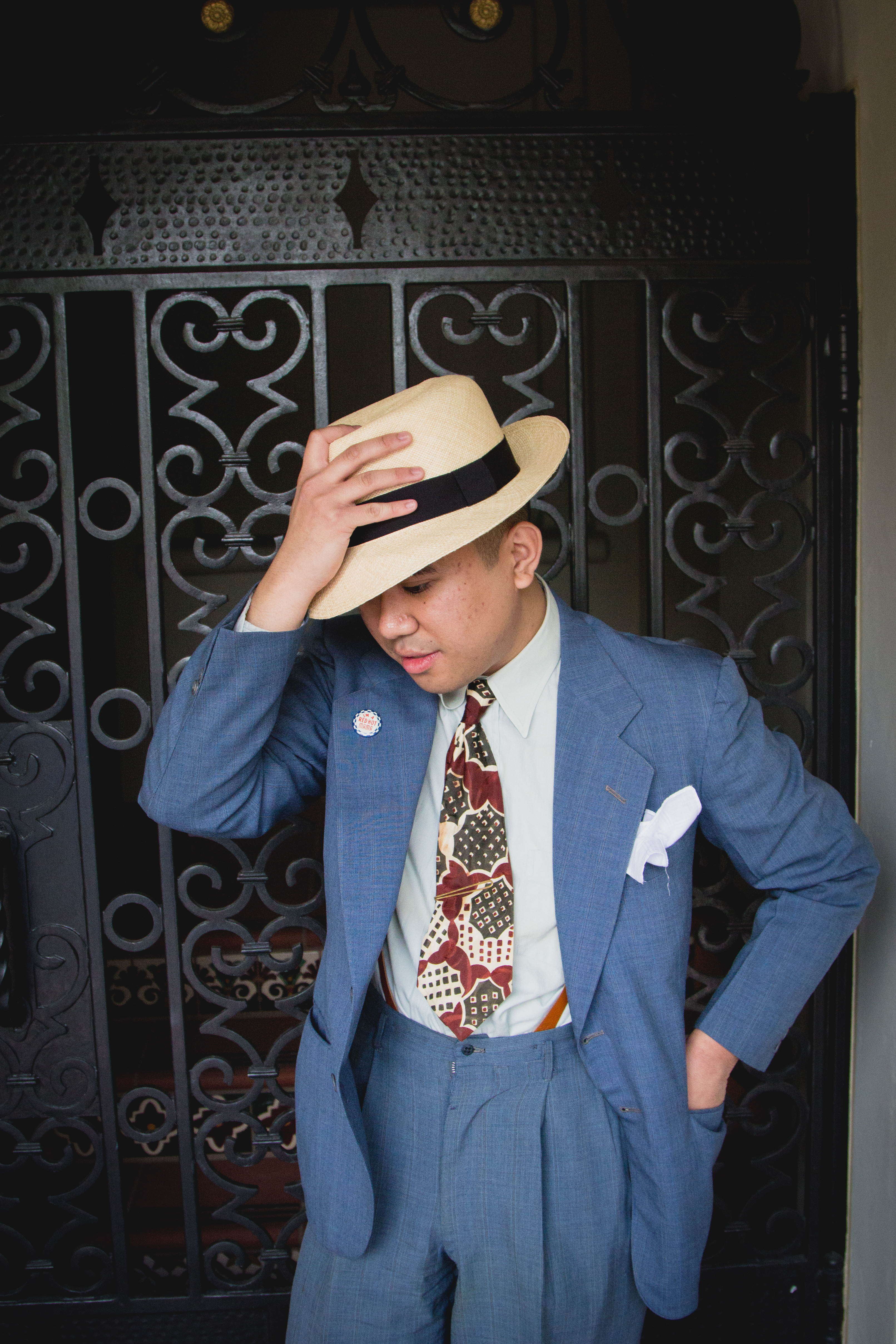 Unlike my high-waisted pants that I wear every so often, I have no modern variation of the drop-loop trouser.  That’s why I sincerely hope that this detail comes back!  It probably won’t be available at your normal mall brands (J. Crew, Banana Republic), but it might trickle down to affordable places like SuitSupply or even Indochino.  Either way, the drop-loop trouser is a great forgotten vintage detail, that I think has its place in the way menswear is heading: an updated version of the classics.

Let me know what you think of the Drop-Loop/Hollywood Waist trouser!  Do you like it? Or do you prefer loops placed traditionally, with the ends at the top of the waistband? Comment away!

B&Tailor images and vintage pictures are not owned by Street x Sprezza.