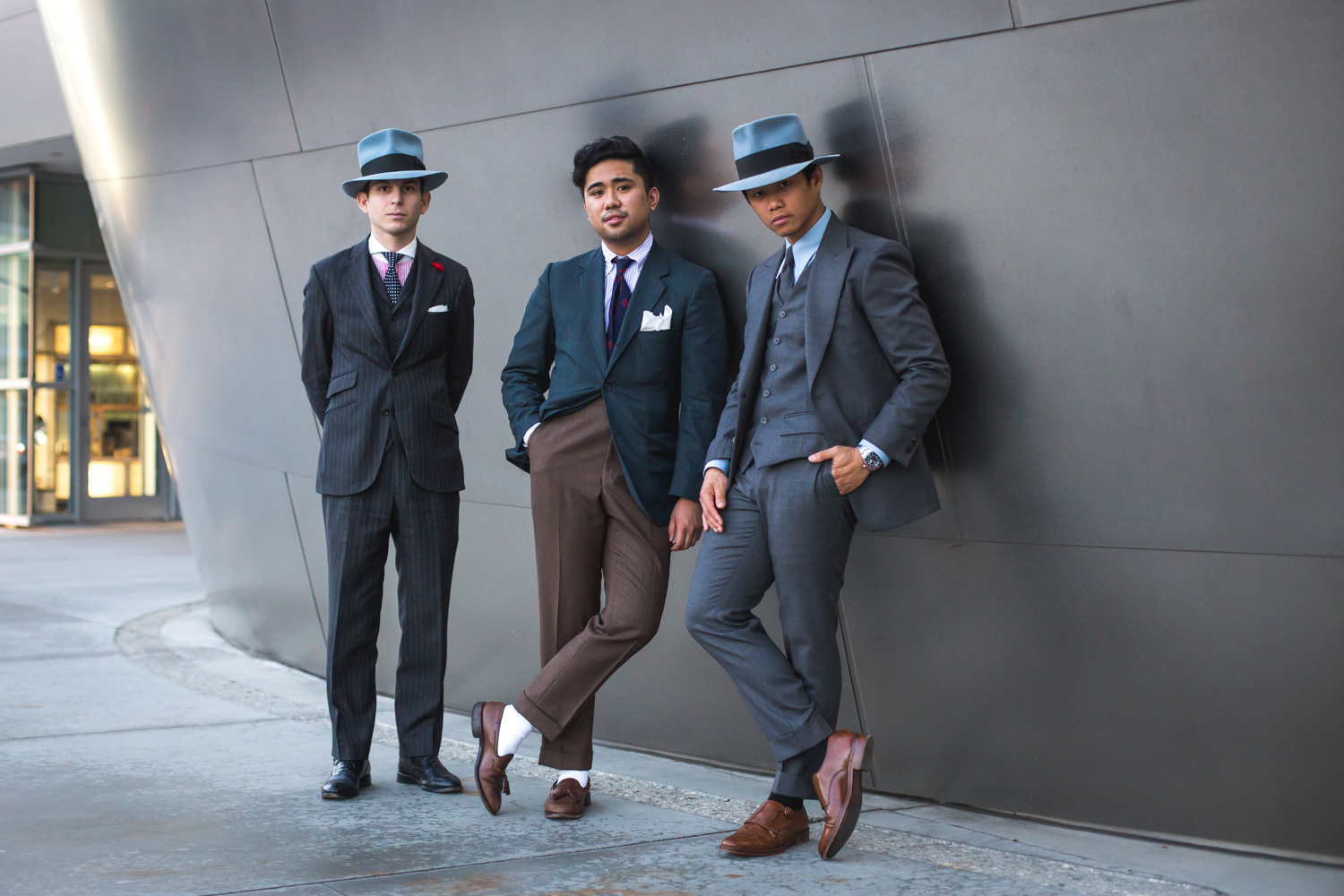 I’m an LA native, but I don’t take advantage of it. I’ve been to LACMA  and a few other cool spots, but never the Broad, which is right in Downtown LA near the Walt Disney Concert Hall and MOCA.  Seeing as I had a free day with Anthony (who is originally from D.C and had never been to the West Coast), I decided to take him there to do some shooting and look at some fantastic artwork.  Luckily, we were also joined by classic style enthusiasts Jacob and Nicholas.  The resultant pictures were amazing.

Anthony and I got there first and was able to explore the first level of the Broad, which was mainly focused on the latest collection entitled “Creature”.  Filled with interesting sculptures and distressed paintings, it was quite a contrast when we went to the second floor which had more “pop art”.  It was overall much brighter and lighthearted in tone.  I could talk about it all day, but I think pictures do it more justice.  Below the outfits, I will include some candids that I was able to take!

Here’s what we wore on that day. 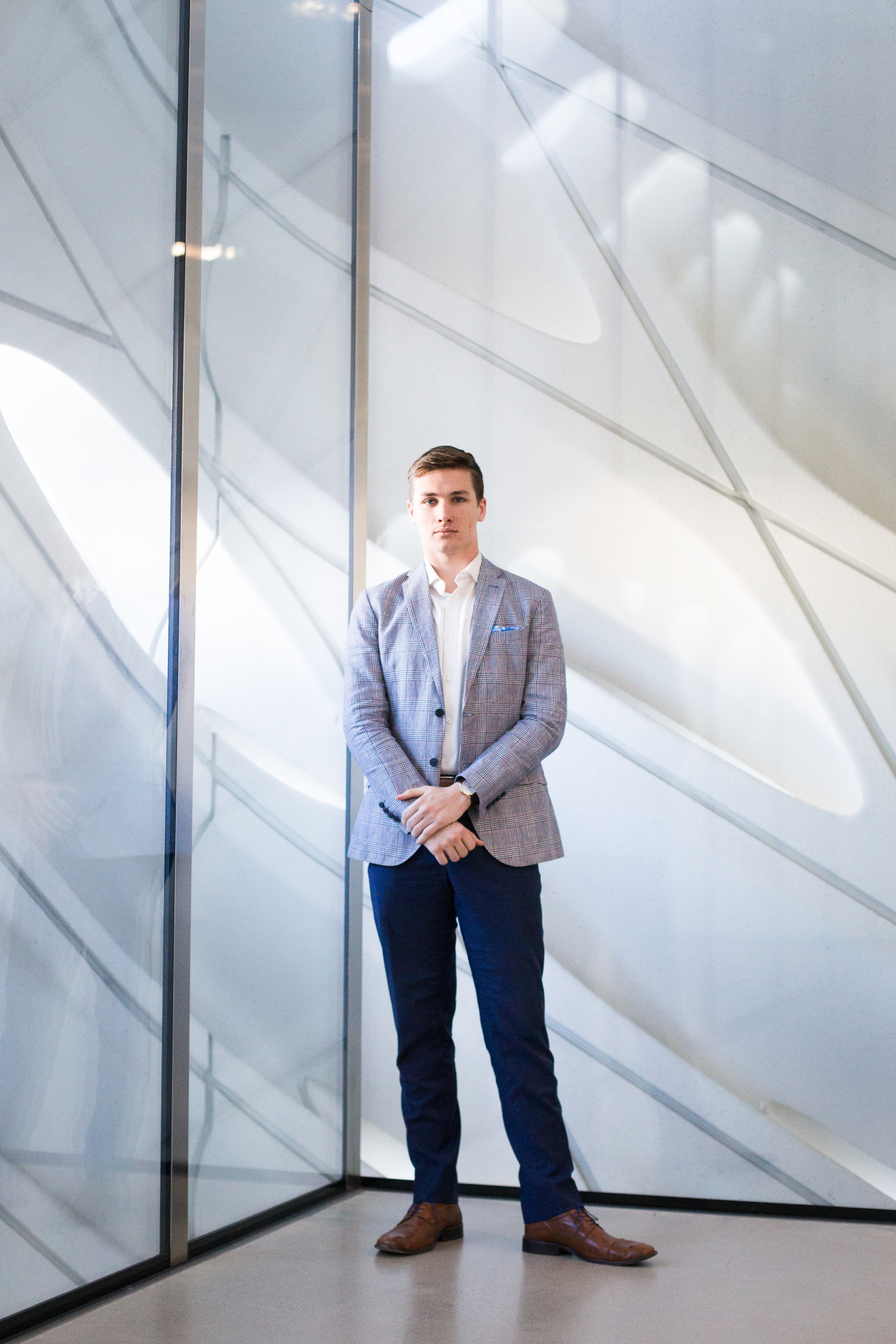 Anthony is our resident “modern menswear” guy.  He’s got slim pants, bright colors, and a general casual vibe.  Doesn’t make it a bad look! It’s definitely got SoCal down to a sartorial tee.  It’s extremely hot here, so there’s no need for a tie or dark somber colors. To adapt to the climate and the overall California nature, he wears a unstructured linen jacket with an unbuttoned shirt. The jacket provides some great colors that are grounded by the other solid pieces (shirt and pants).  If you look closely, he even has blue shoe laces! 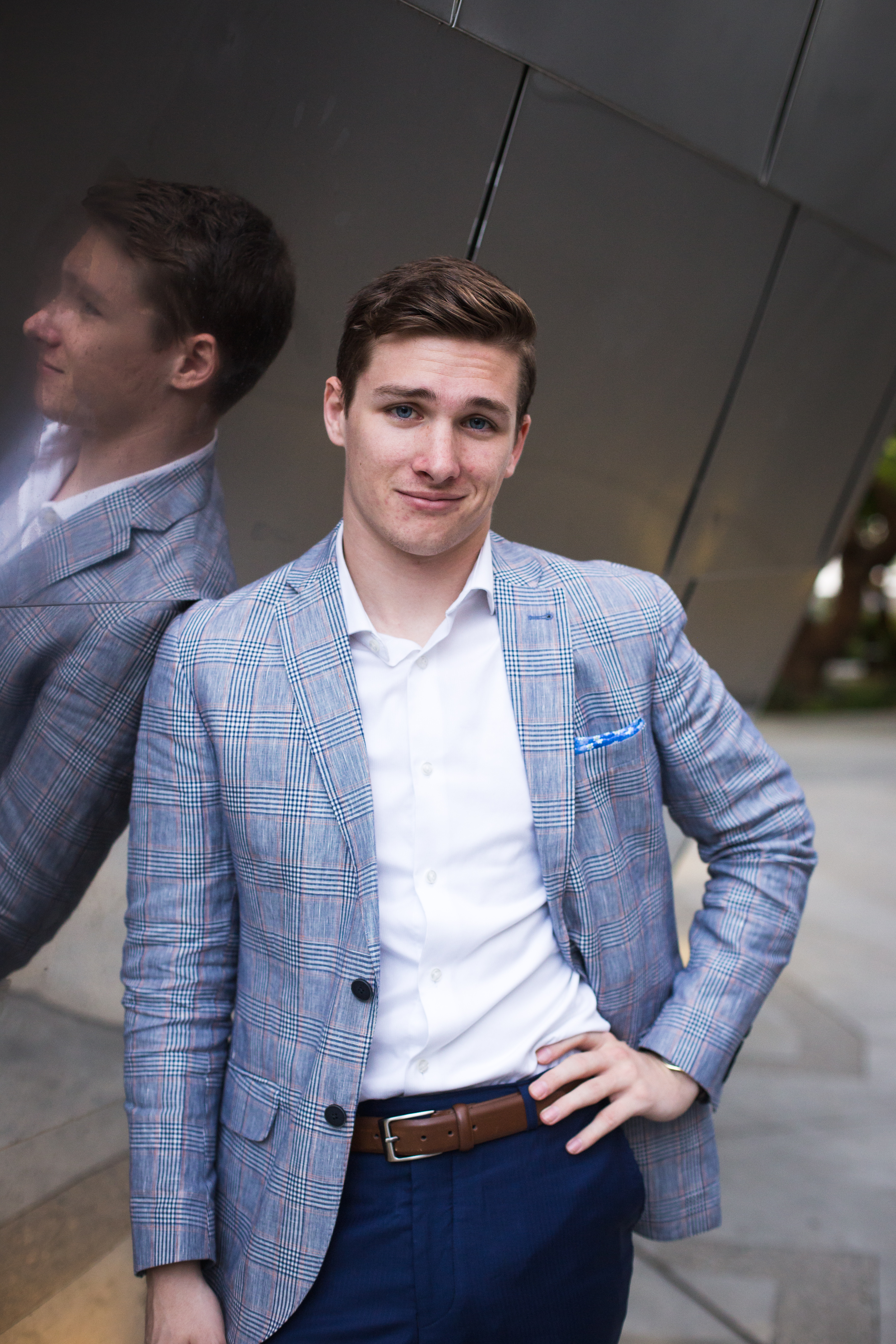 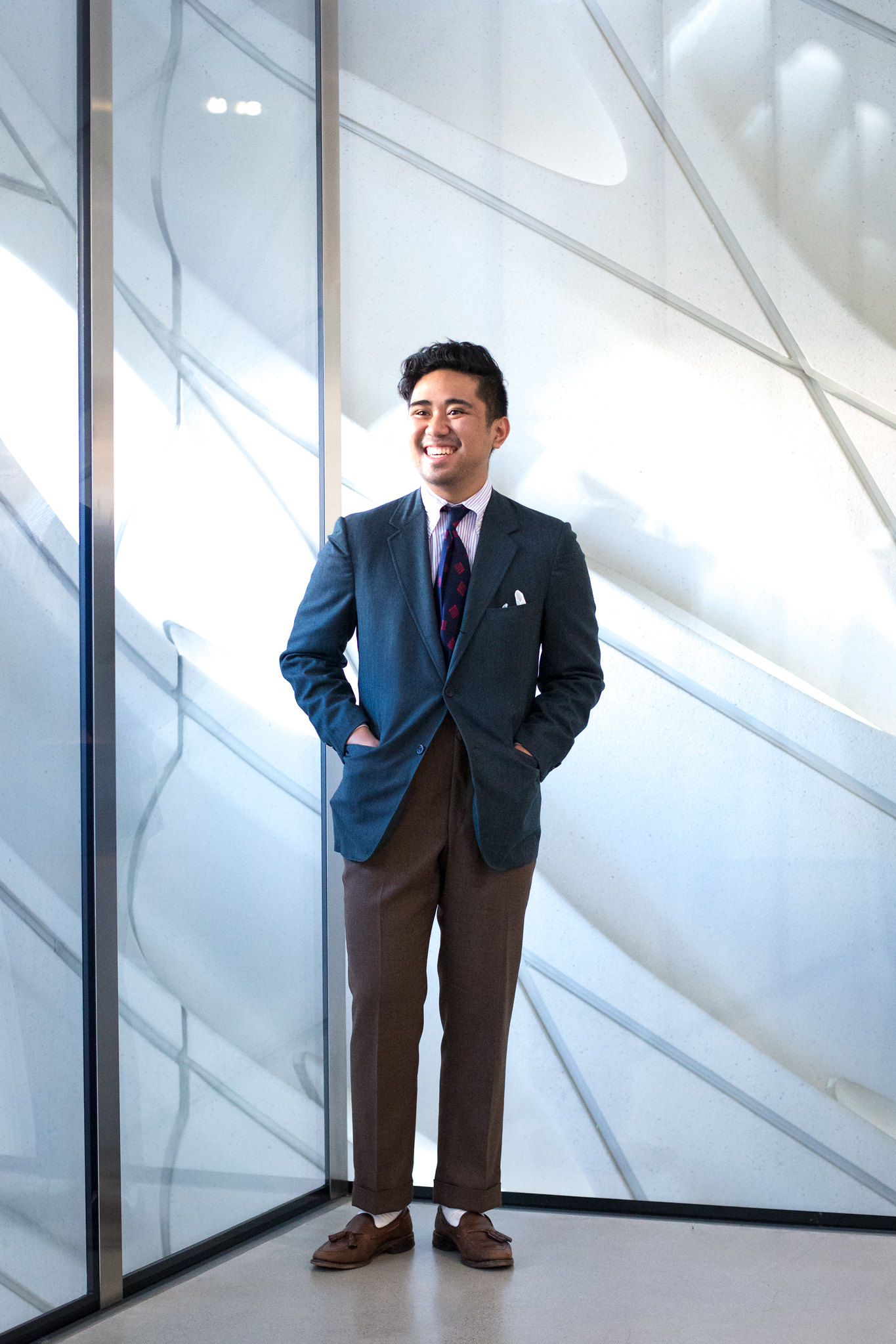 My outfit is pretty Ivy, as have most of the outfits I’ve been doing the past couple of months.  It’s got the trad blue blazer, in a 3-roll-2 configuration, with a generously rolled button down collar striped shirt, high rise slim-straight trousers, and white socks! Everything is cleanly tailored and very reminiscent of what people would wear back in the height of “ivy” in the 1960s.  It’s a pretty safe look.  We’ve combined brown and blue before, and the use of these solid, grounded colors allows you to play around with patterns in the shirt and tie! 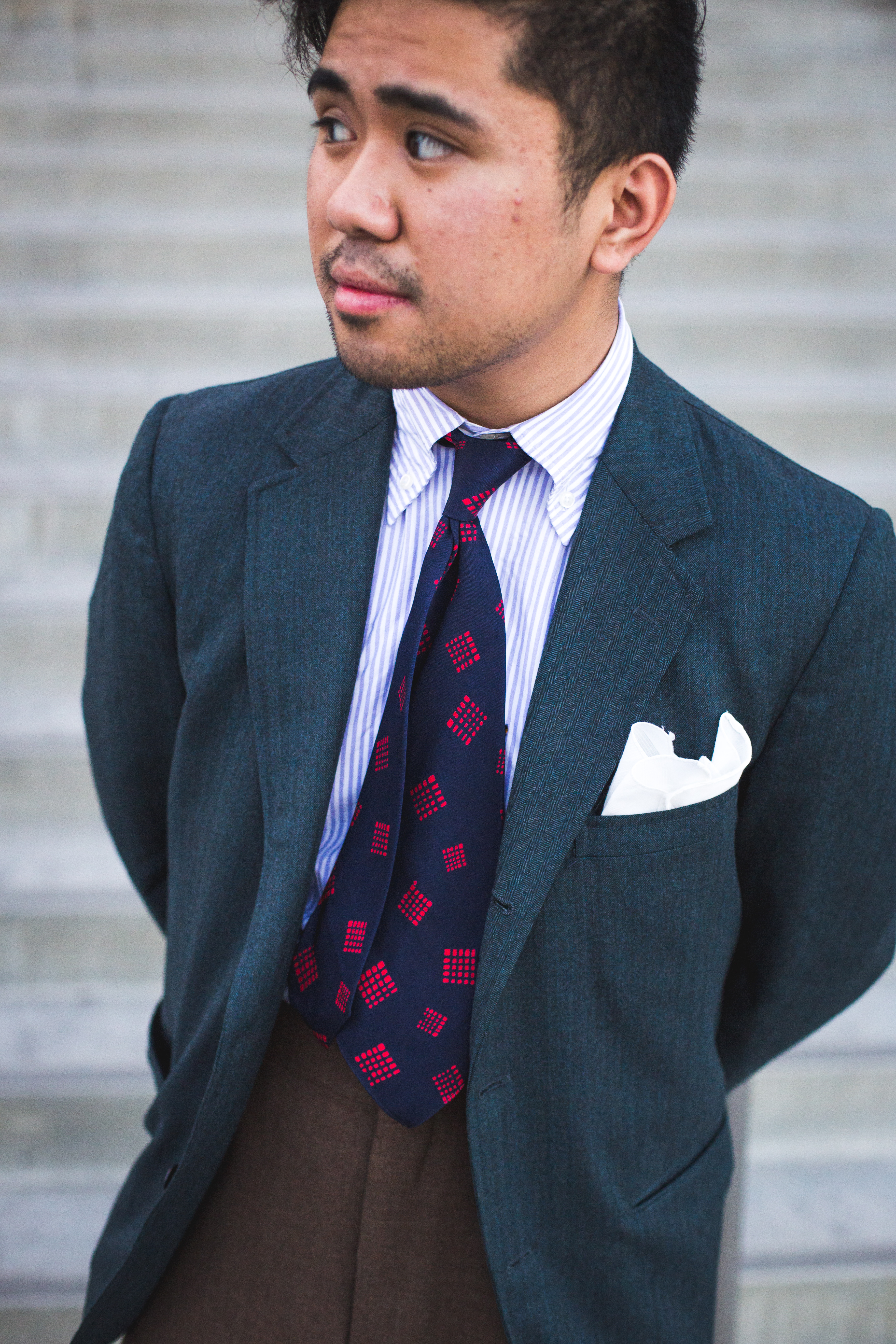 Some cool sprezzatura for you.  Note that while this is very “trad”, there is still expert use of pattern mixing.  I’ve never been a fan of solid “business looks” and I prefer to play with colors and prints.  This combination (print tie with a striped shirt) is one of my favorite things to do, as it really echoes the elegance of the 1930’s. It does make me sad that guys who “have” to suit up often play it safe. 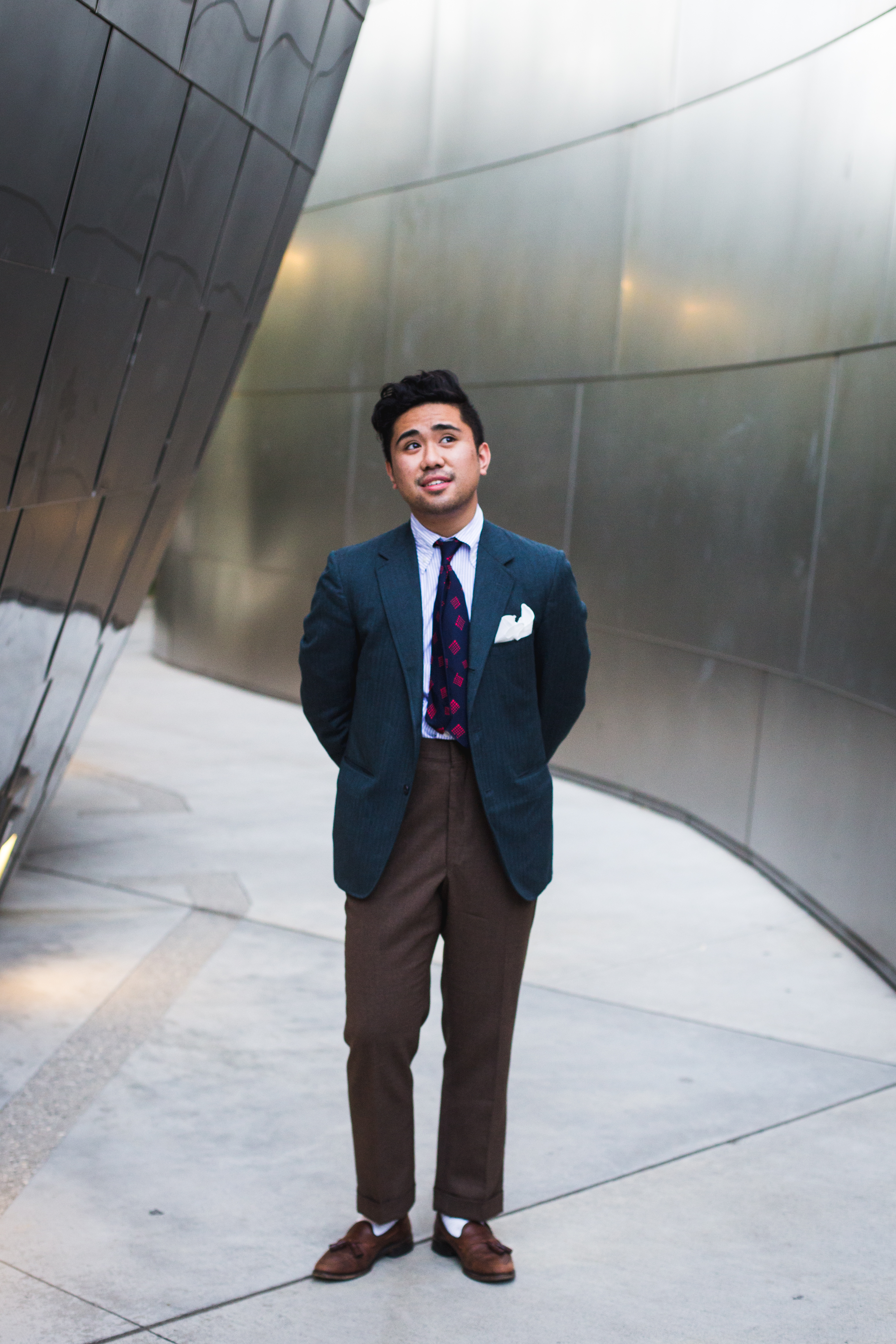 Here’s another lesson in “Ethan Style”: High rise trousers.  With no breaks, you’ll get a cleanly tailored line down the true-waist (buttoning point).  I think it makes me look slimmer and taller, which is needed as I’m a semi-stocky guy at only 5’8″. 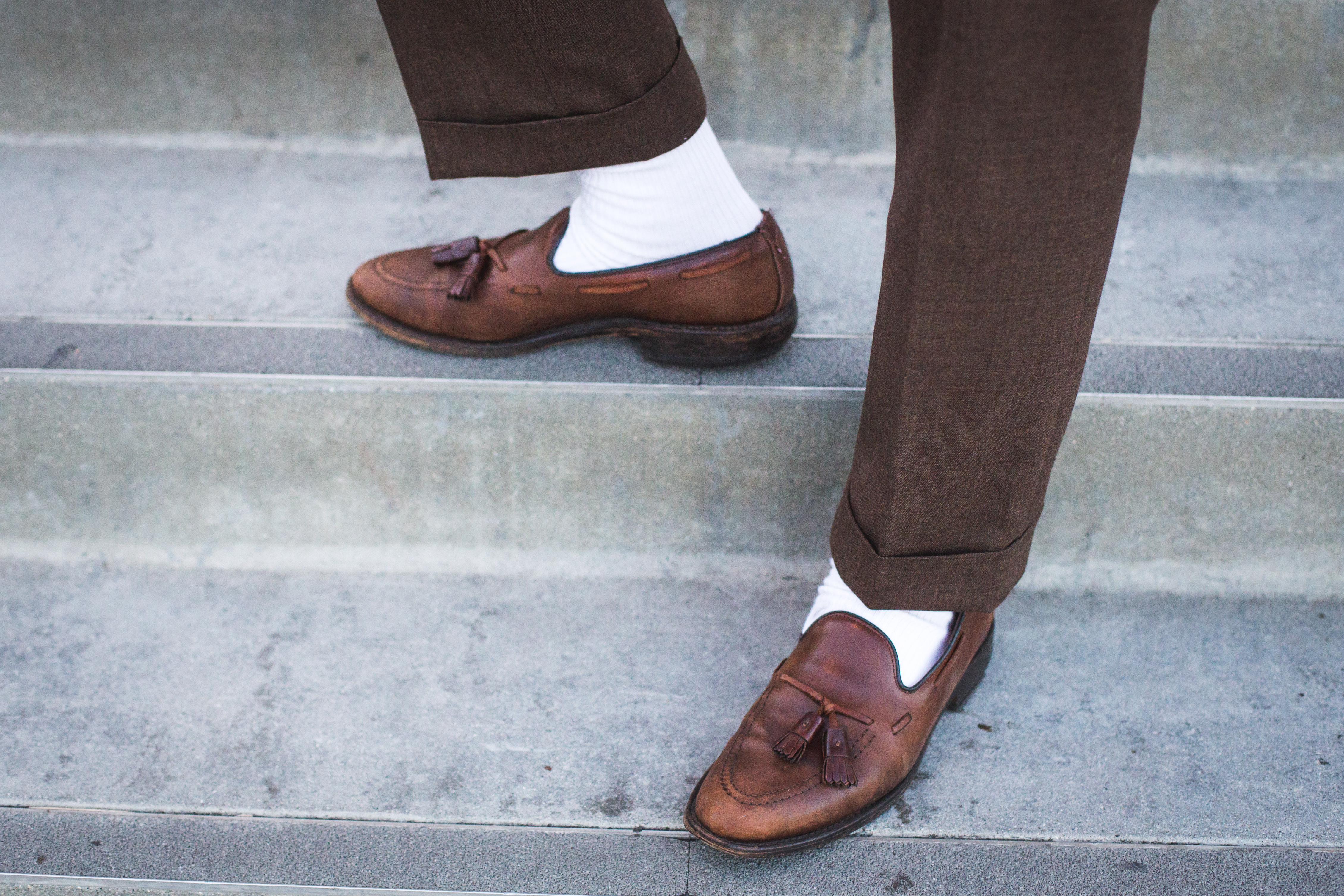 White socks are an expert move for guys who want to go the more “trad” or “ivy” route.  Just make sure they are white (or light colored) dress socks and not athletic socks.  You can read more about my take on White Socks here. 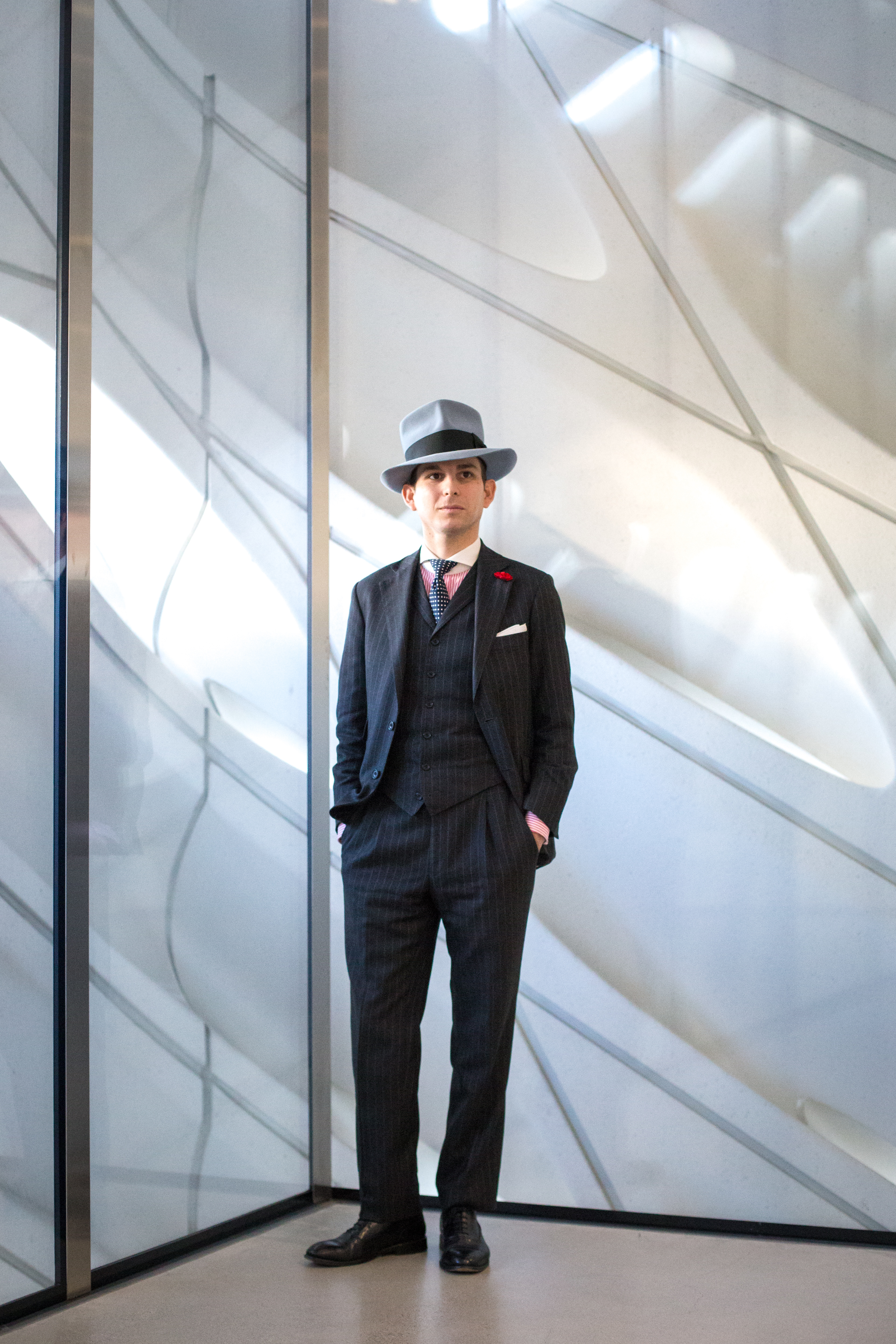 Nicholas is visiting us from San Diego and is the owner of Engel & Co Hatters, a bespoke hat company.  In a stark contrast to the slightly saturated style of Anthony and me, Nicholas wears a dark pinstripe three piece with slanted hacking pockets and pleats. It’s a bit more conservative, but note that conservative doesn’t mean baggy.  His pants are still slim and clean, with a straight line down to his shoes; his jacket and waistcoat also fit extremely well and aren’t super tight as most of the guys out there.  Nicholas really knows how to do classic style. 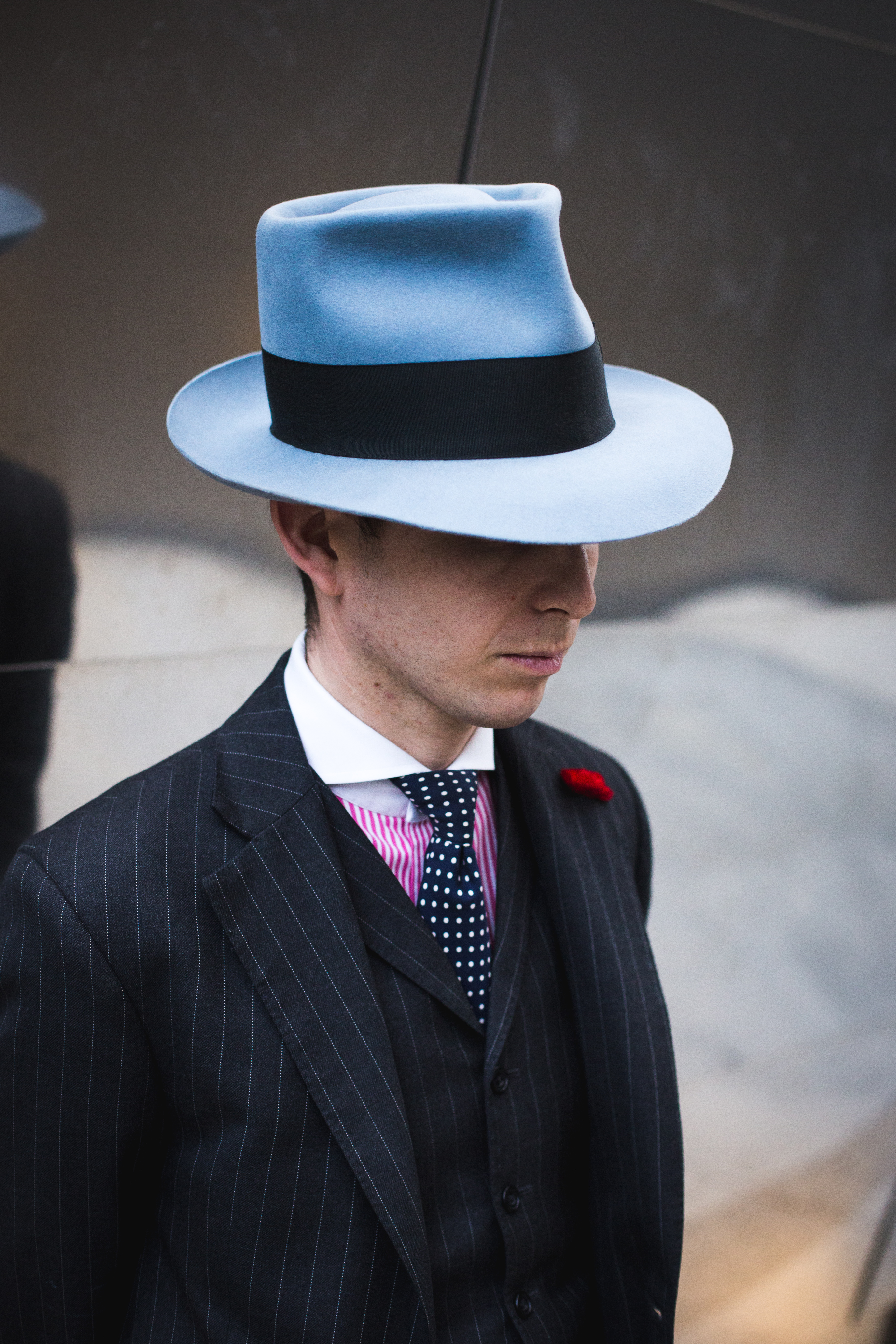 Note that the hat looks blue in the photograph.  Be sure to check out his website for the accurate depiction of his hats.

There’s so much greatness going on in this picture.  Firstly, note that Nicholas actually goes for three patterns in his outfit; it’s pretty rare to see someone do so when wearing such a dark, somber three piece suit.  He wears a striped shirt (which is scaled perfectly to not clash) with a polka dot tie. This styling of prints on stripes on stripes is straight 1930’s.  All of the pieces are modern but through his expert styling, Nicholas really exudes a classic 1930’s-1940’s Golden Era vibe.  But that’s not even the coolest part of this.

The coolest part is that he’s wearing one of his own creations.  This hat is one of the house styles of Engel & Co, and  is made in a the English/Anglo-American style which features a wide brim and tall crown.  It really calls back to the 1930s and 1940s.  His hats are bespoke, which means you can get a completely custom hat based on your head pattern!  I hope to one day use a service like this, as its hard for me to find a hat that looks great on me.   Having a grey fedora works with everything and is the color to get (along with brown) for those of you who want to take the leap and start wearing fedoras! Wear them with caution; only certain guys can incorporate it well in their wardrobe. 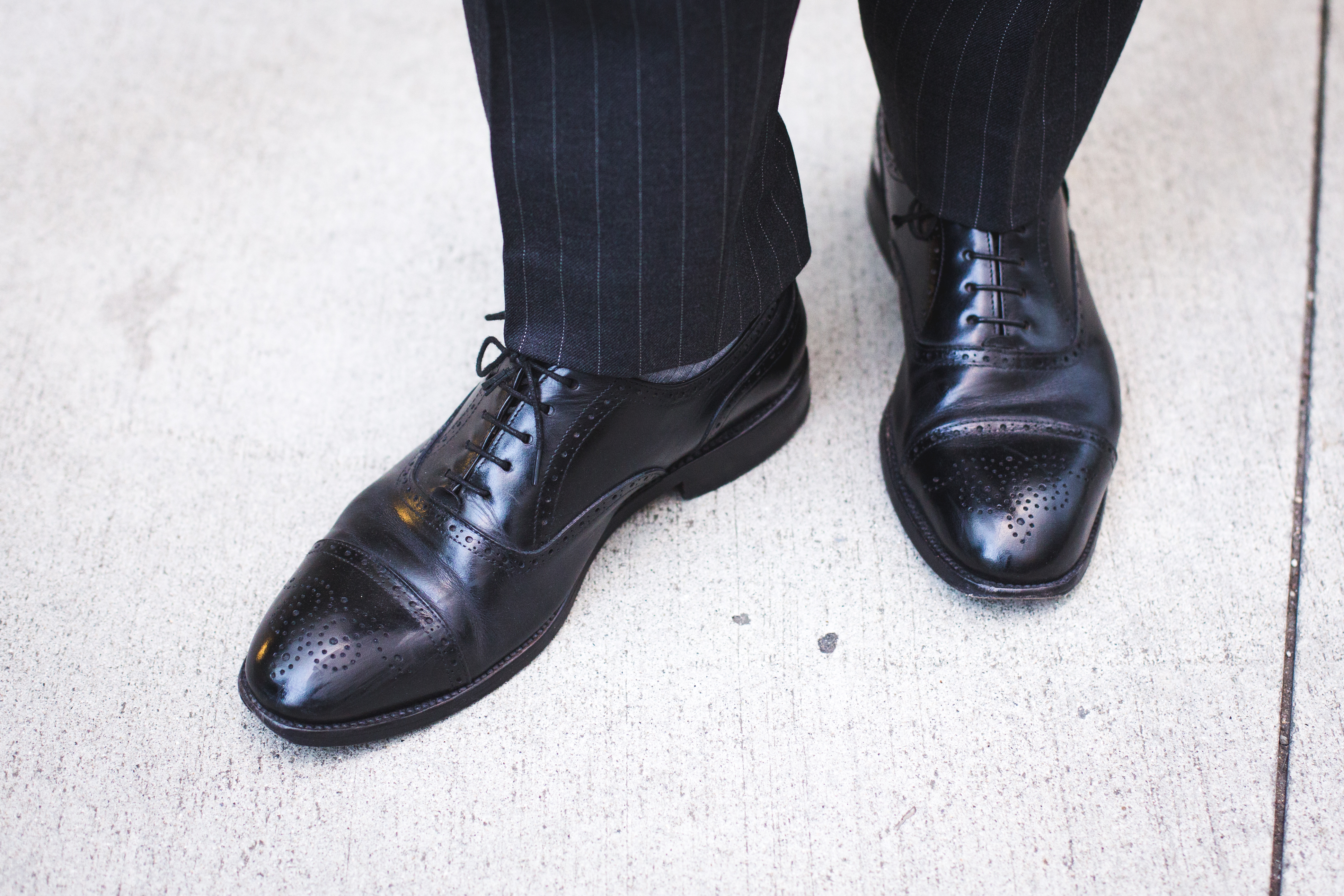 Black captoes are an essential piece to any sartorial wardobe. 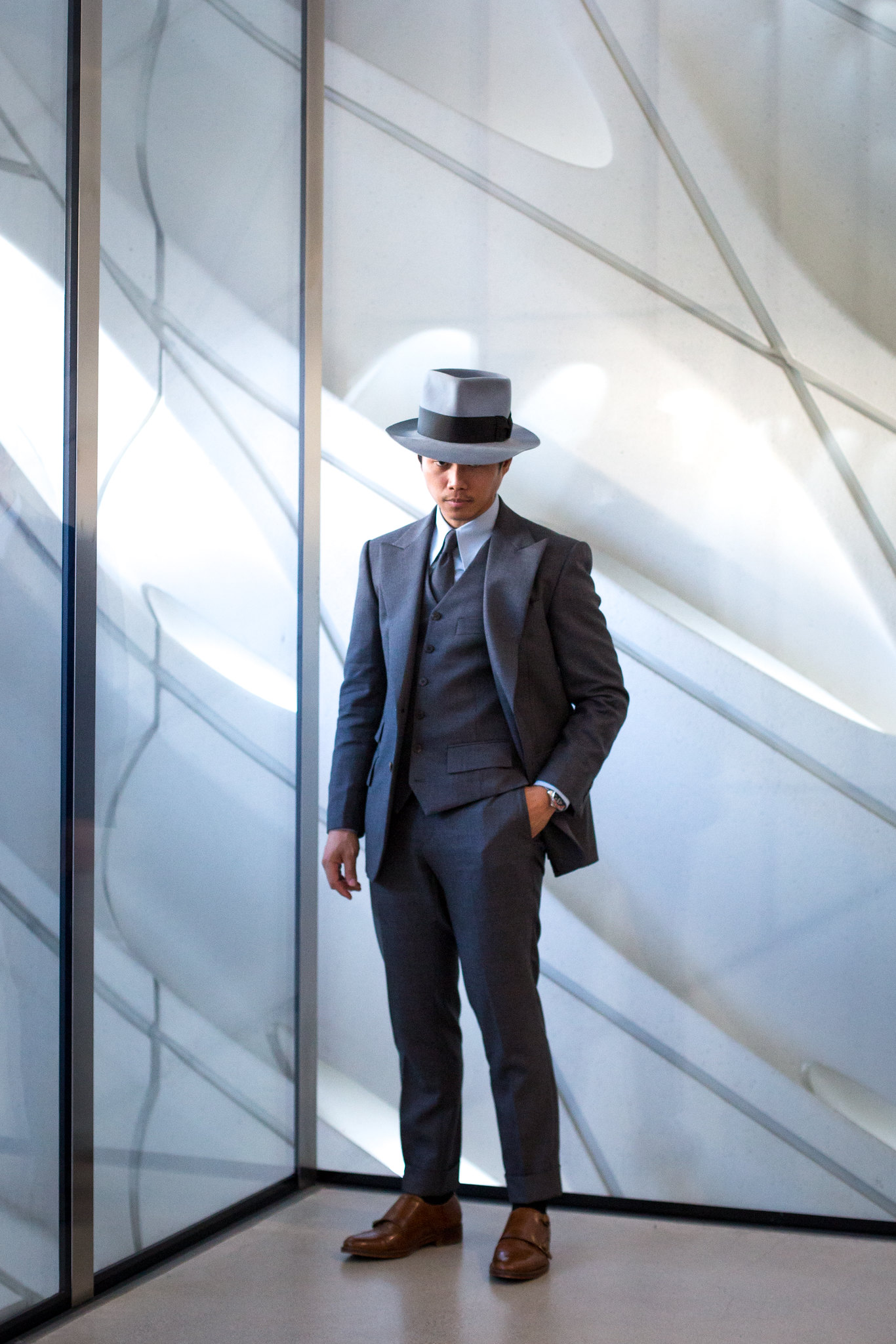 Jacob looks completely bad ass.  We’ve talked about bringing the 1930’s into the modern age and he does it extremely well.  He sports a complete 4-piece suit from HVRMINN, famed designer whose photograph years ago in New York actually spurred my interest in tailoring and classic style.  Articles of Style even featured him!

It’s not a reproduction of a 1930’s suit (note the low waistband very slim leg) but it’s definitely an awesome suit.  The EPONYMOVS label suit from HVRMINN  comes with a jacket, trousers, waistcoat, spearpoint shirt, and tie.  Jacob finishes the look with a hat made by Nicholas.  Apparently this particular hat has seen a bunch of famous people and been around!

Overall, Jacob’s outfit totally goes against my preference for combining colors and patterns.  His outfit is almost monochromatic, with a touch of blue in the shirt and brown in the shoes.  With everything well tailored and some great designs (just look at those LAPELS) it doesn’t scream “business man”; it screams knowledge of personal style.  Never have I seen someone look so badass in a suit and fedora. 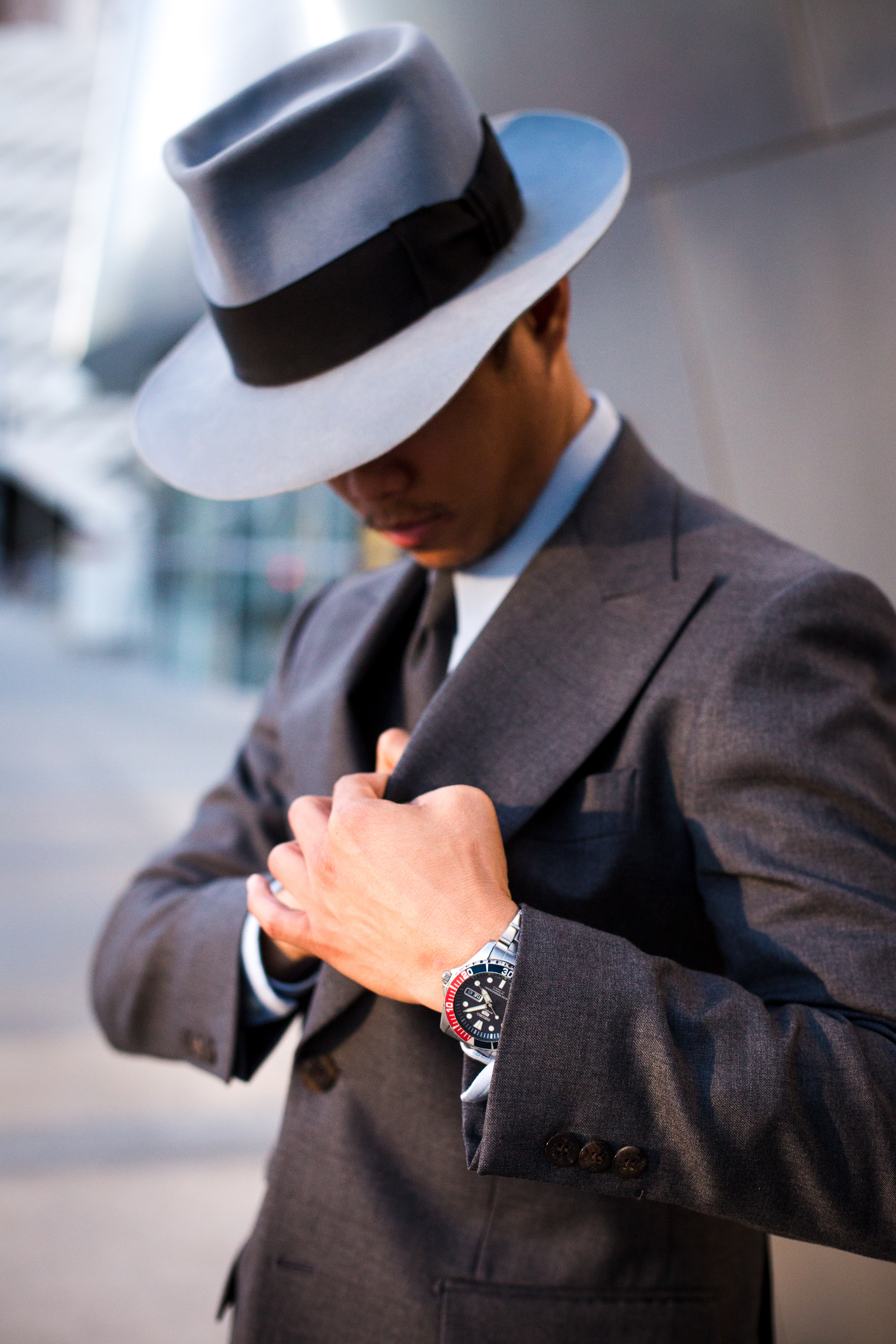 Watches aren’t something I wear, but Jacob does it well.   Note that the grey fedora works well with this charcoal suit! 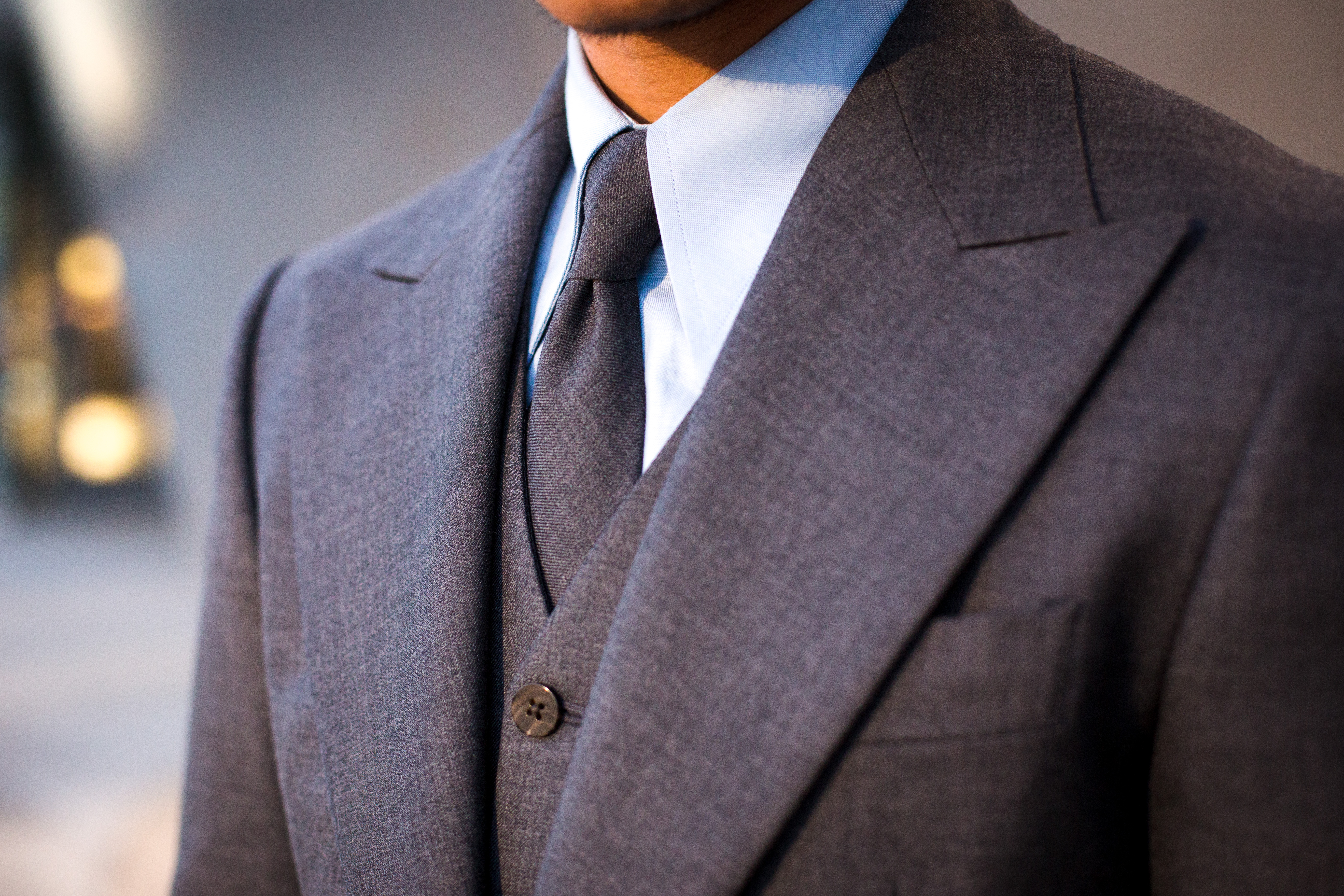 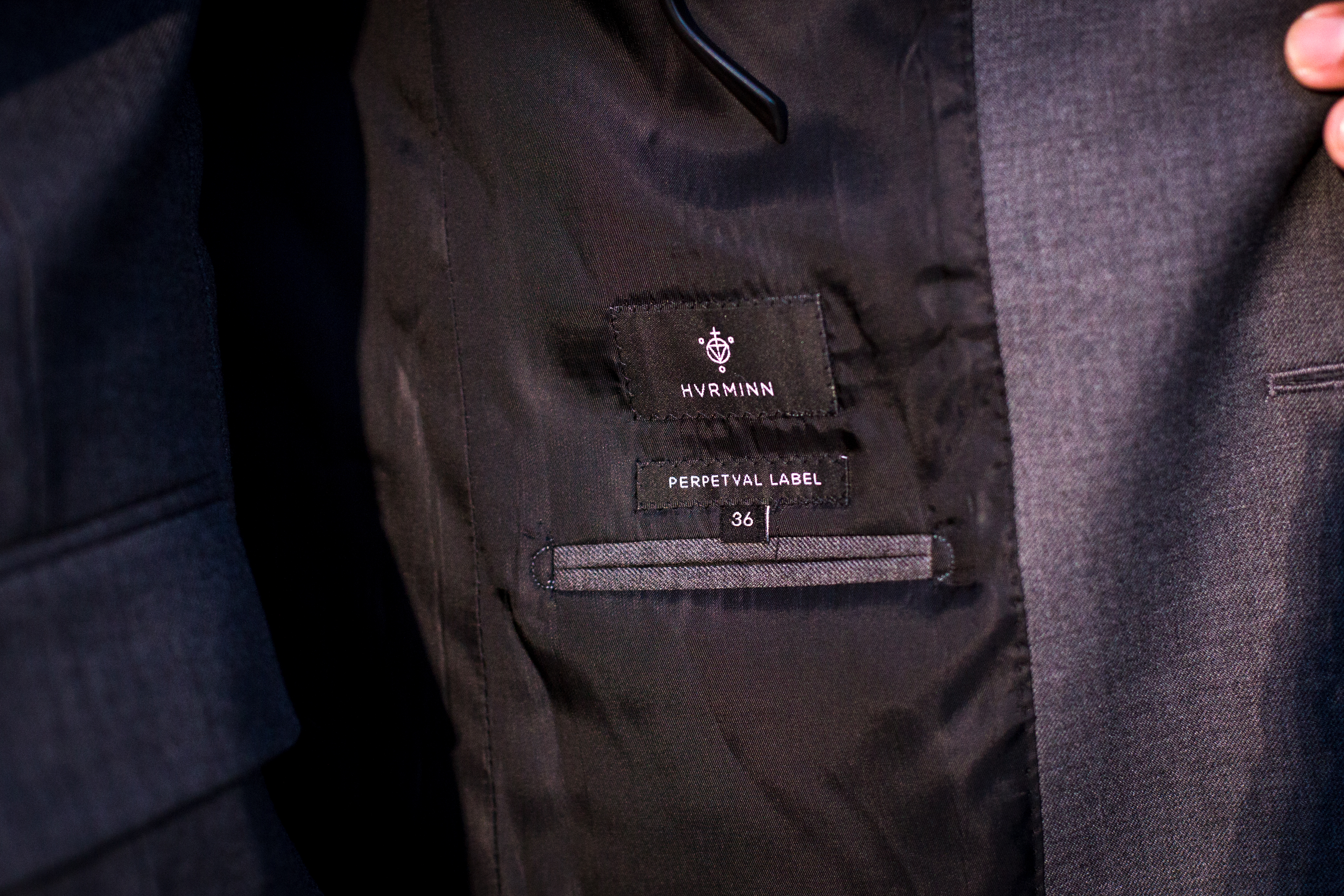 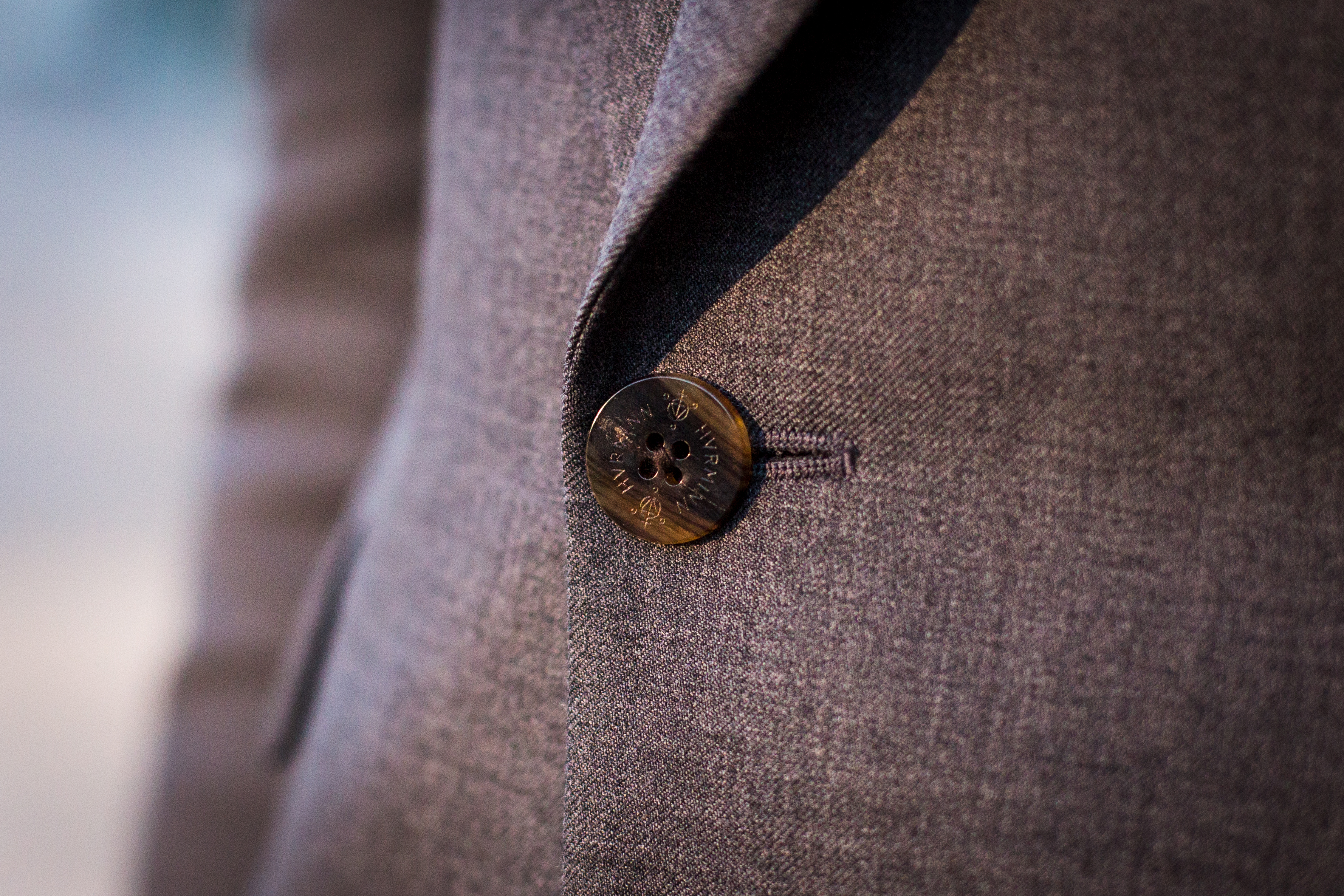 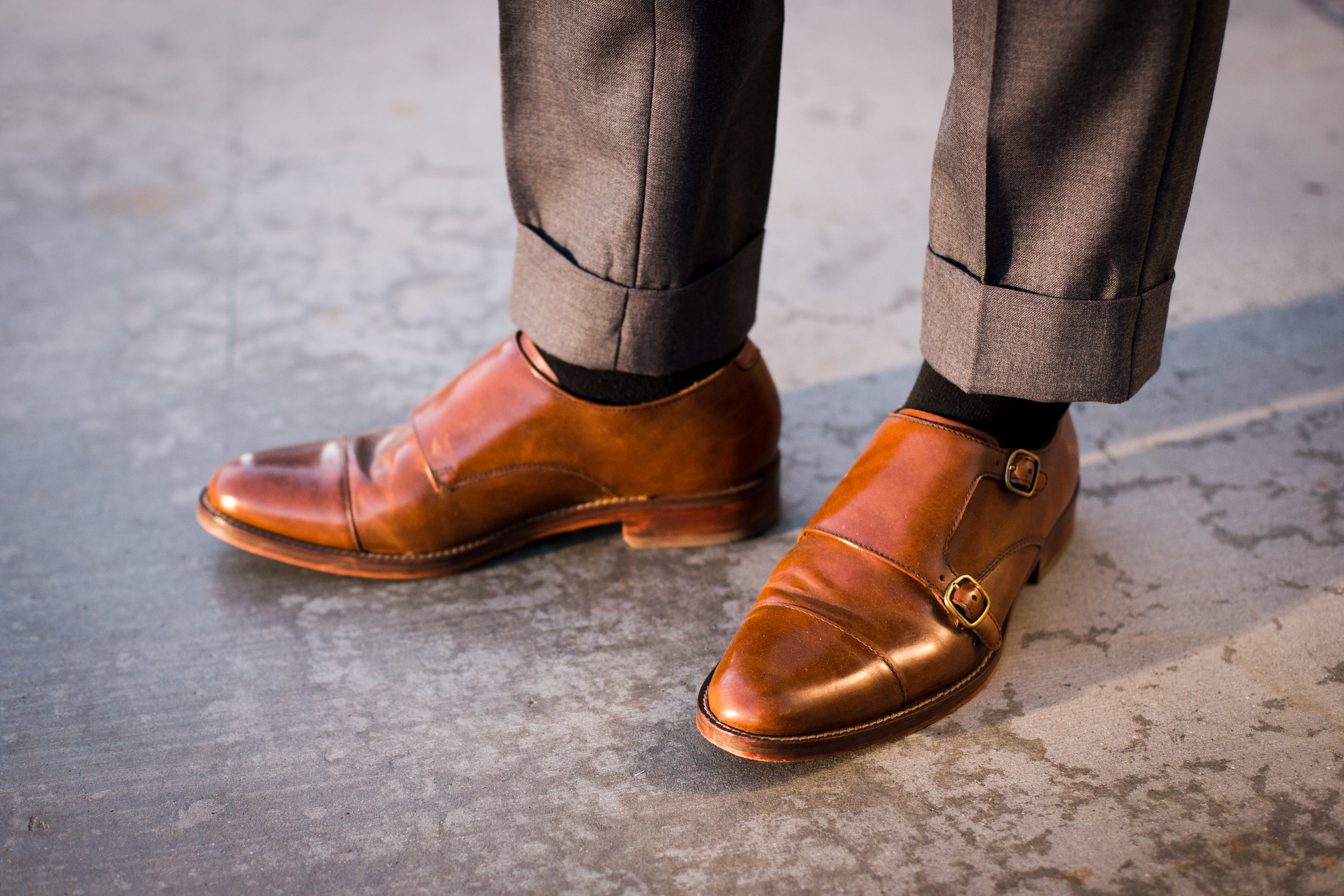 In contrast to Nicholas, Jacob wears cognac monkstraps instead of black shoes.  It makes his outfit a bit more casual, even though he preferred a monochromatic look (which is usually conservative). 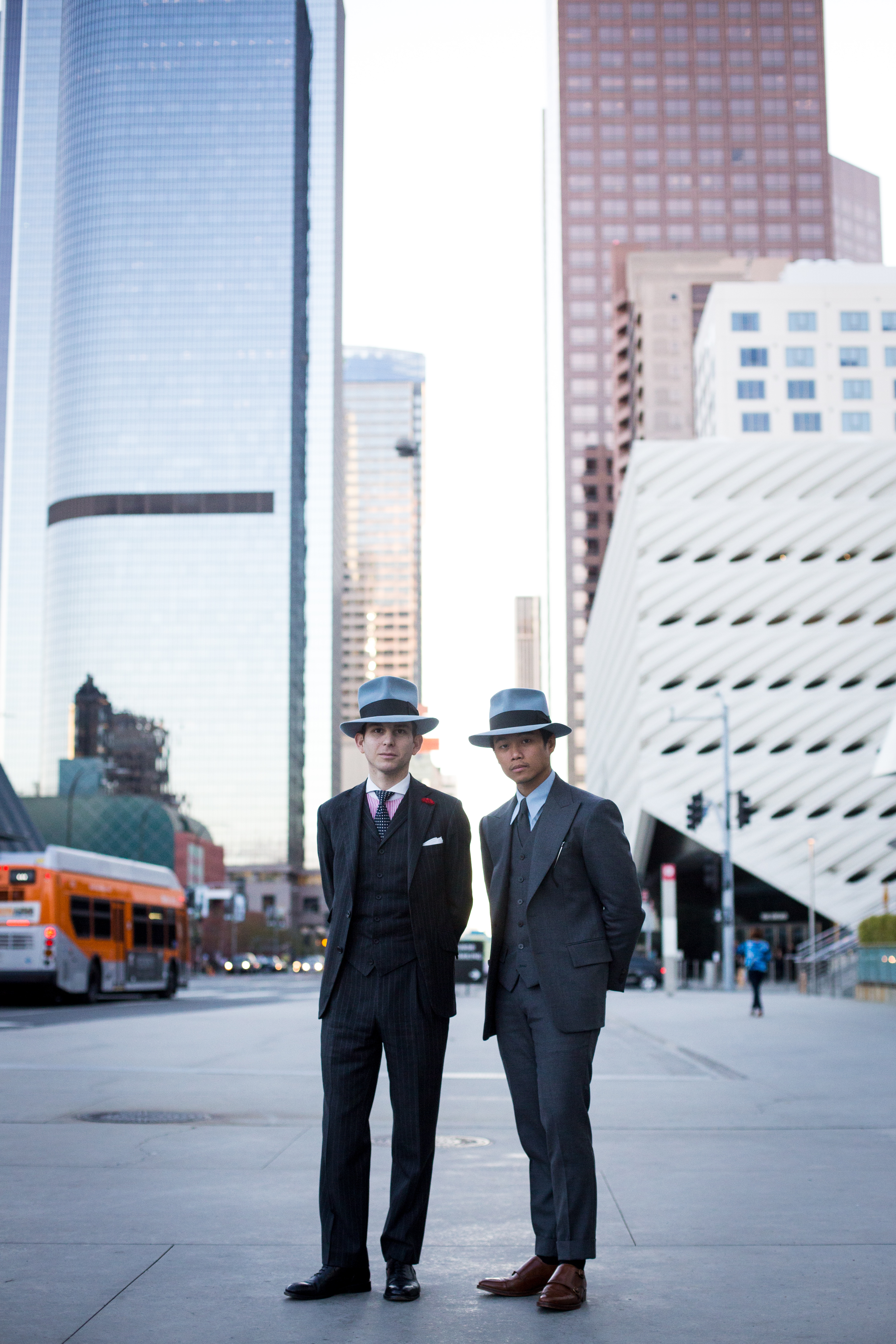 One of my favorite shots of all time. 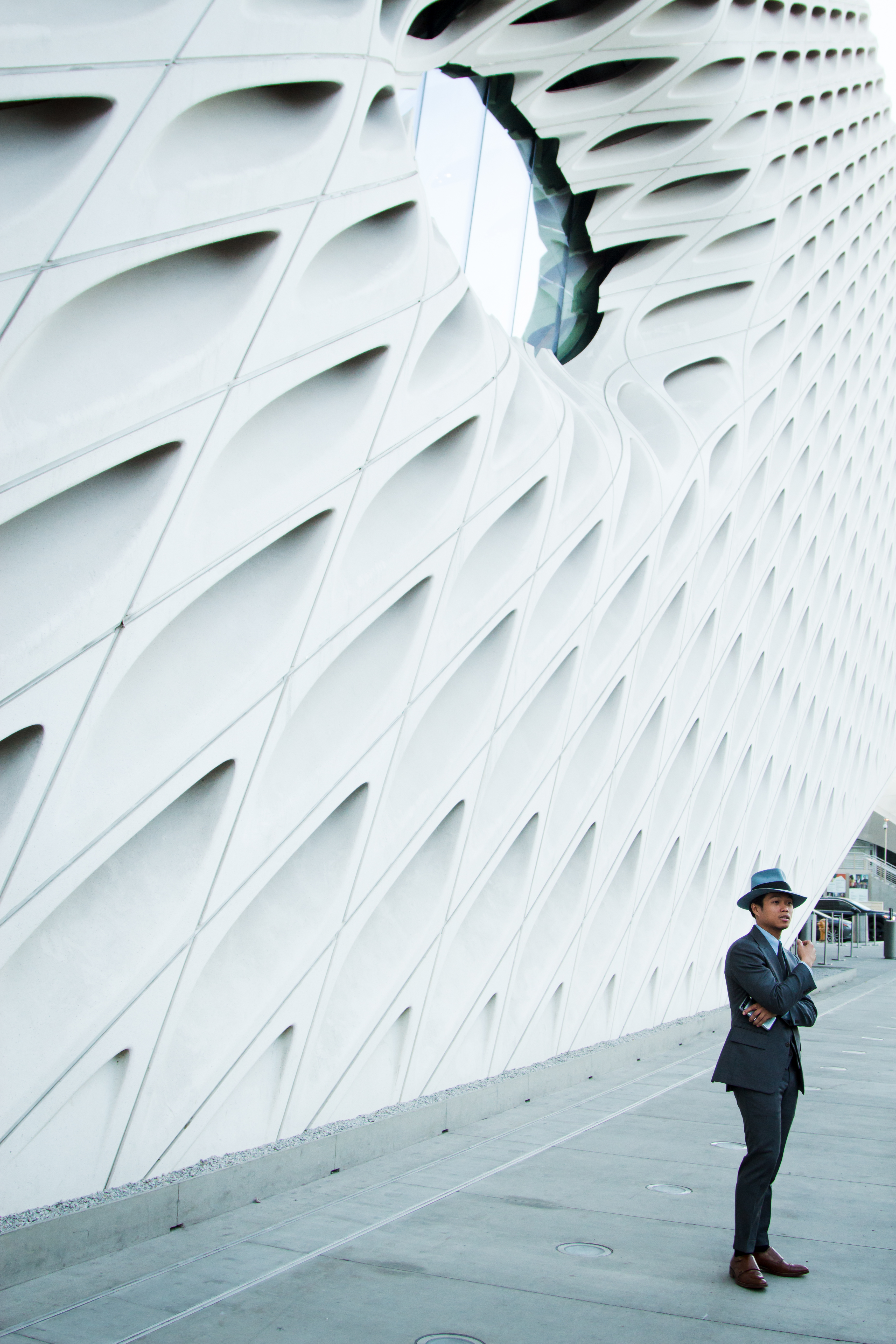 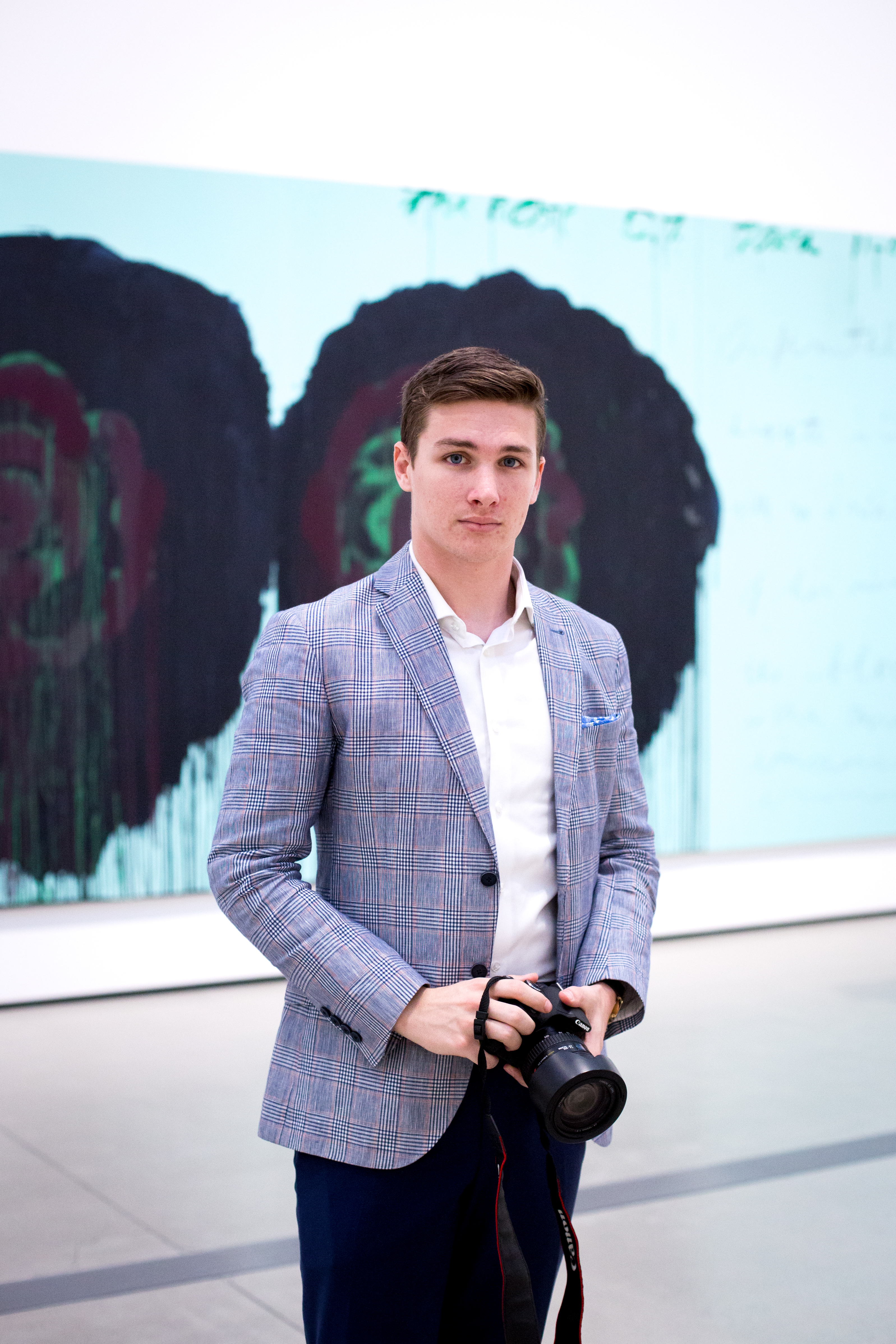 Backup shooter amongst the art. 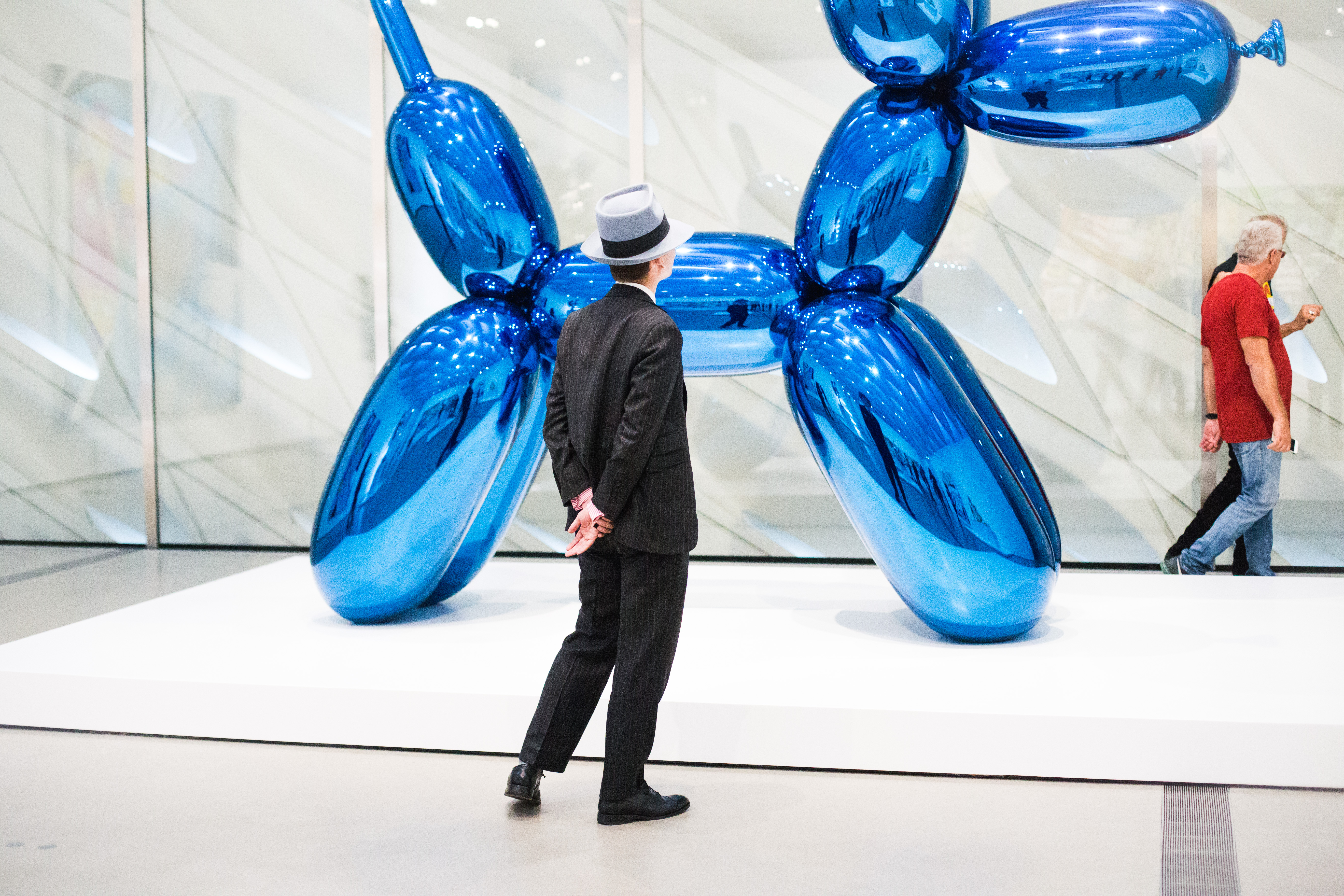 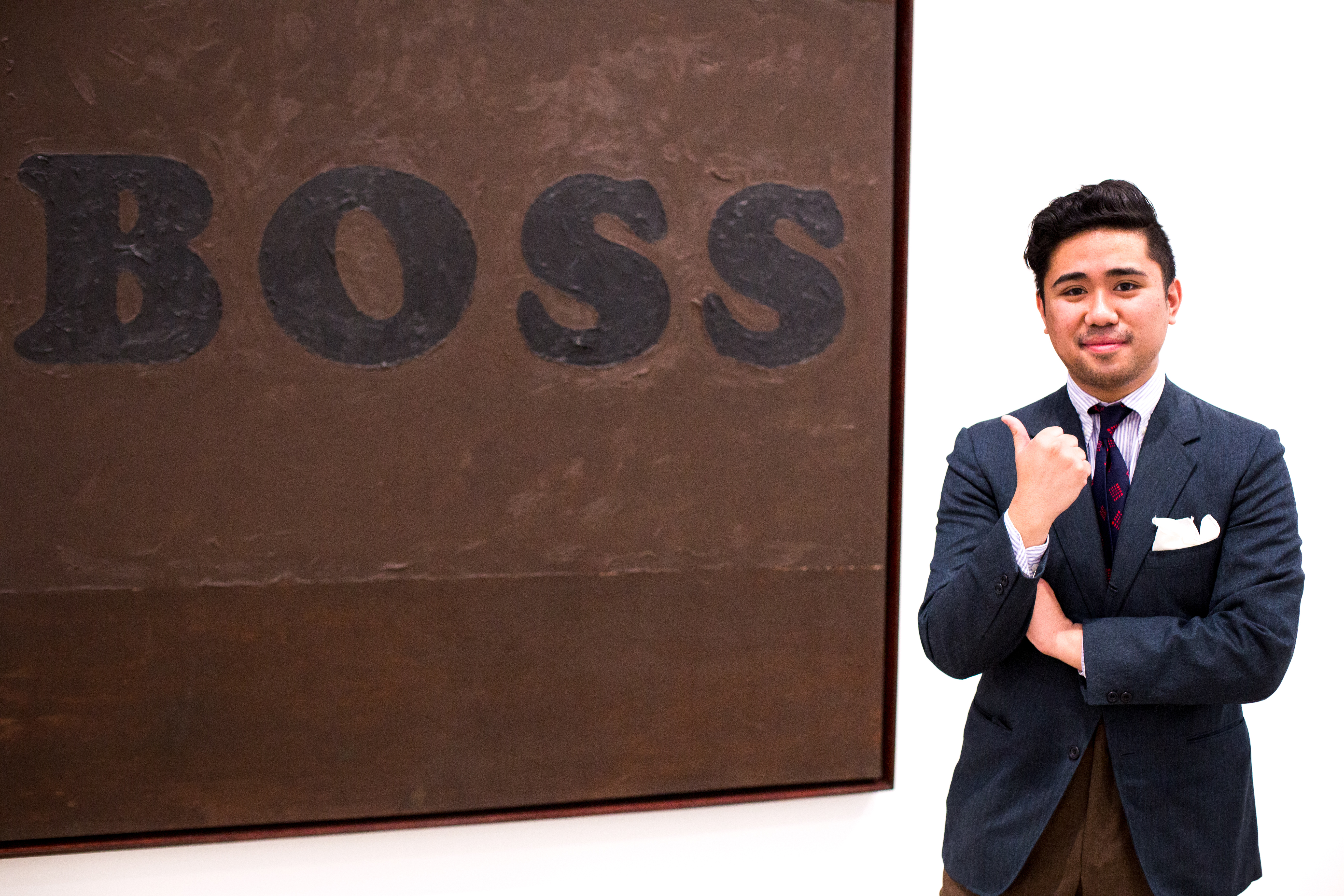 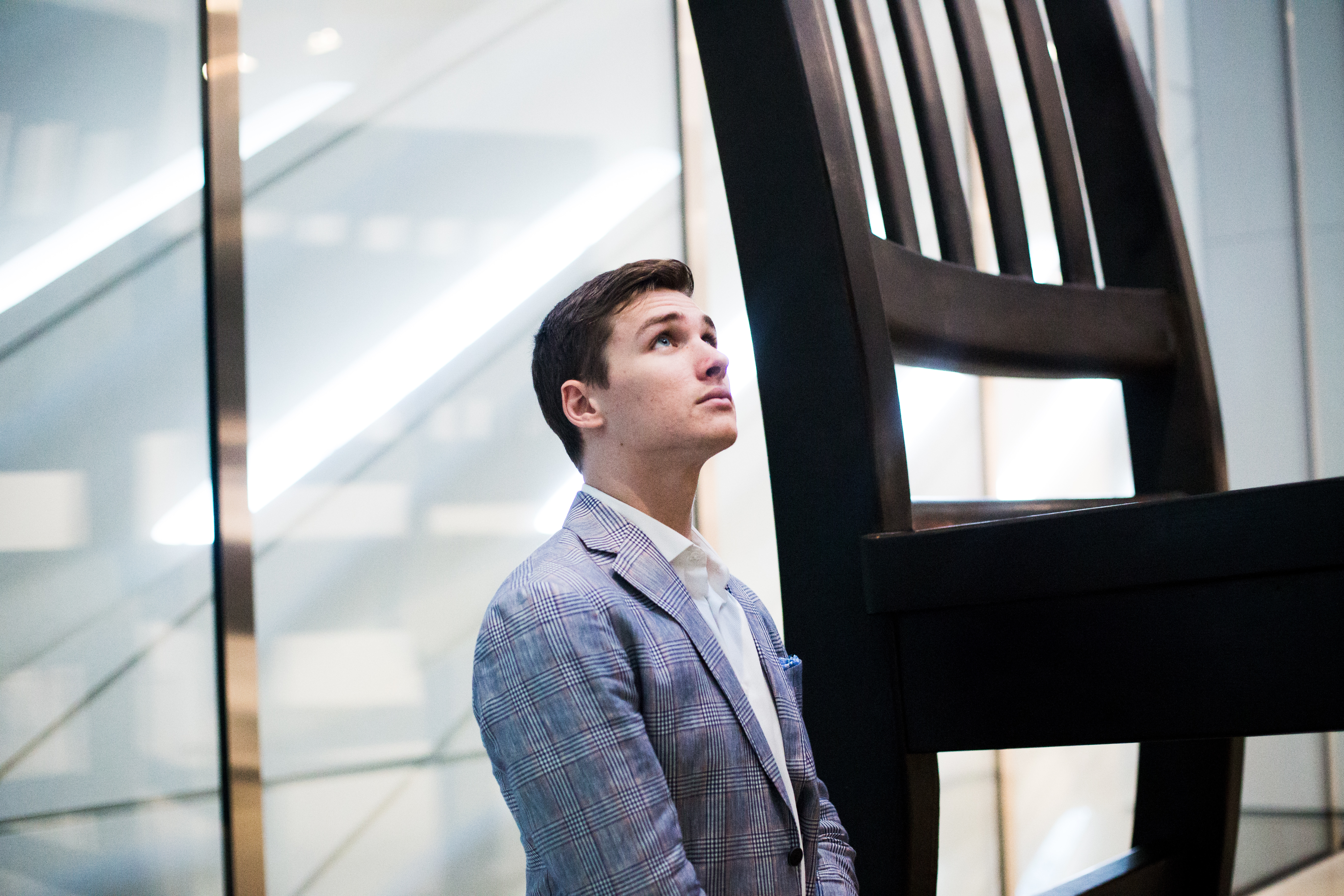 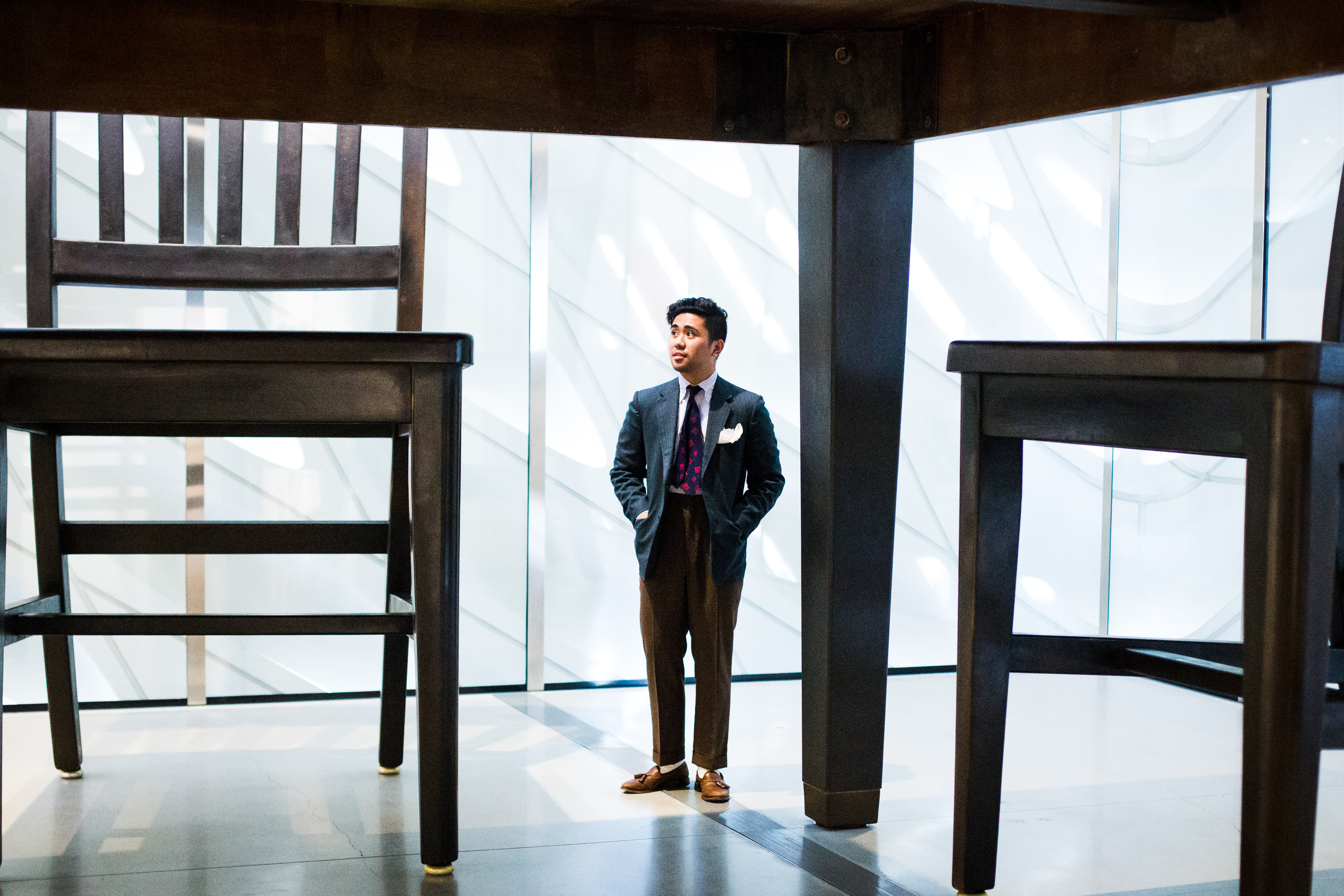 See how high waist makes me look slimmer and my legs longer? 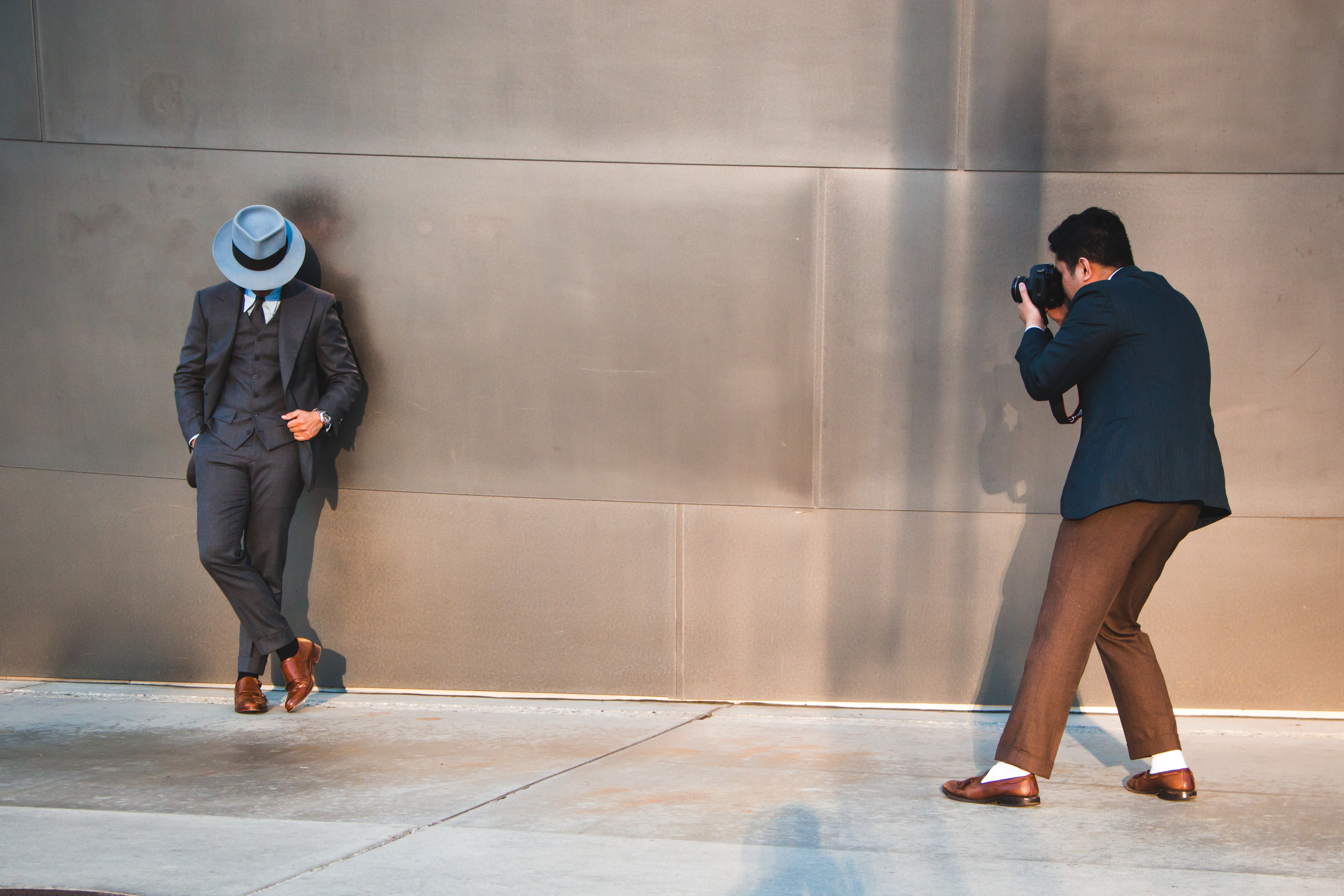 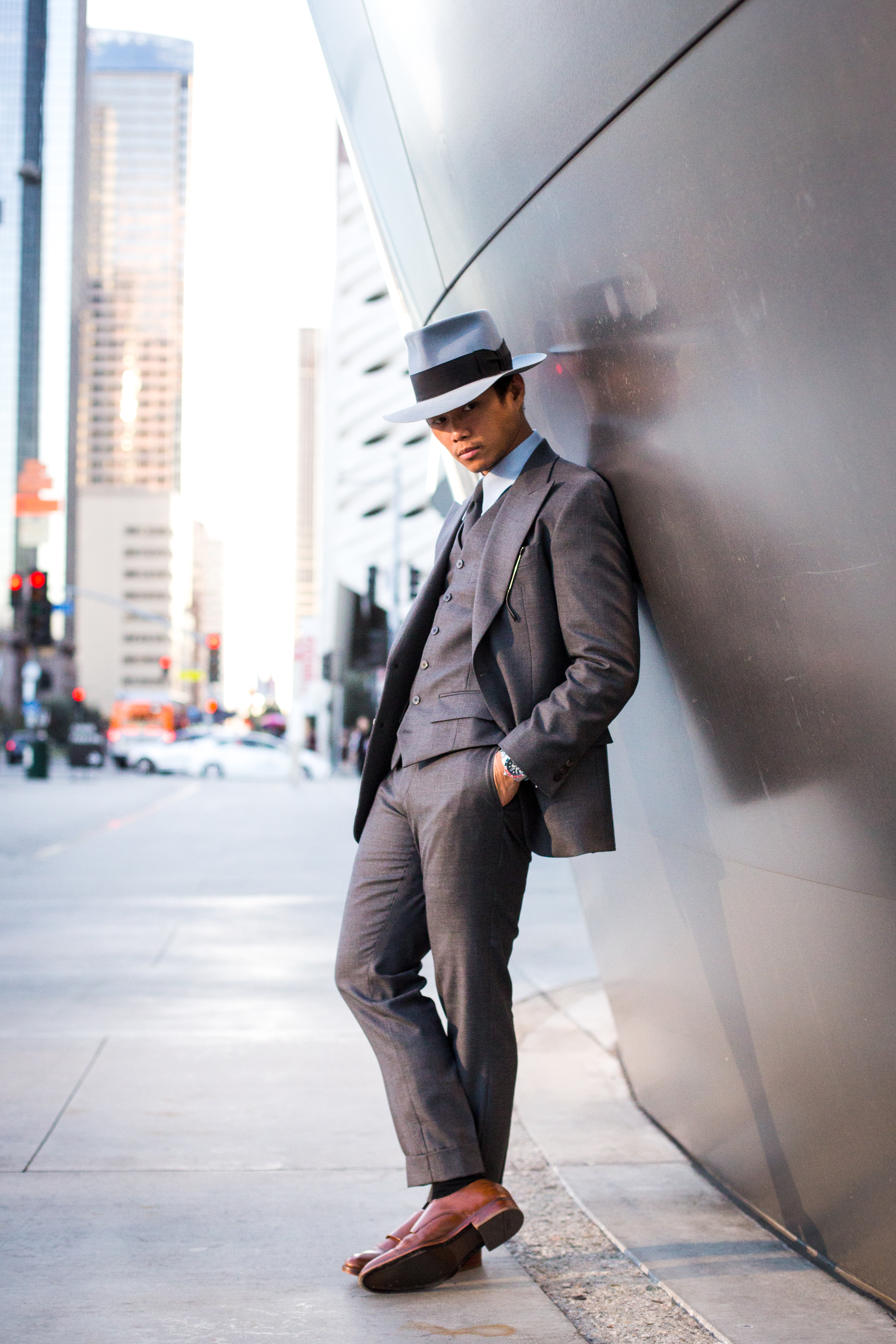 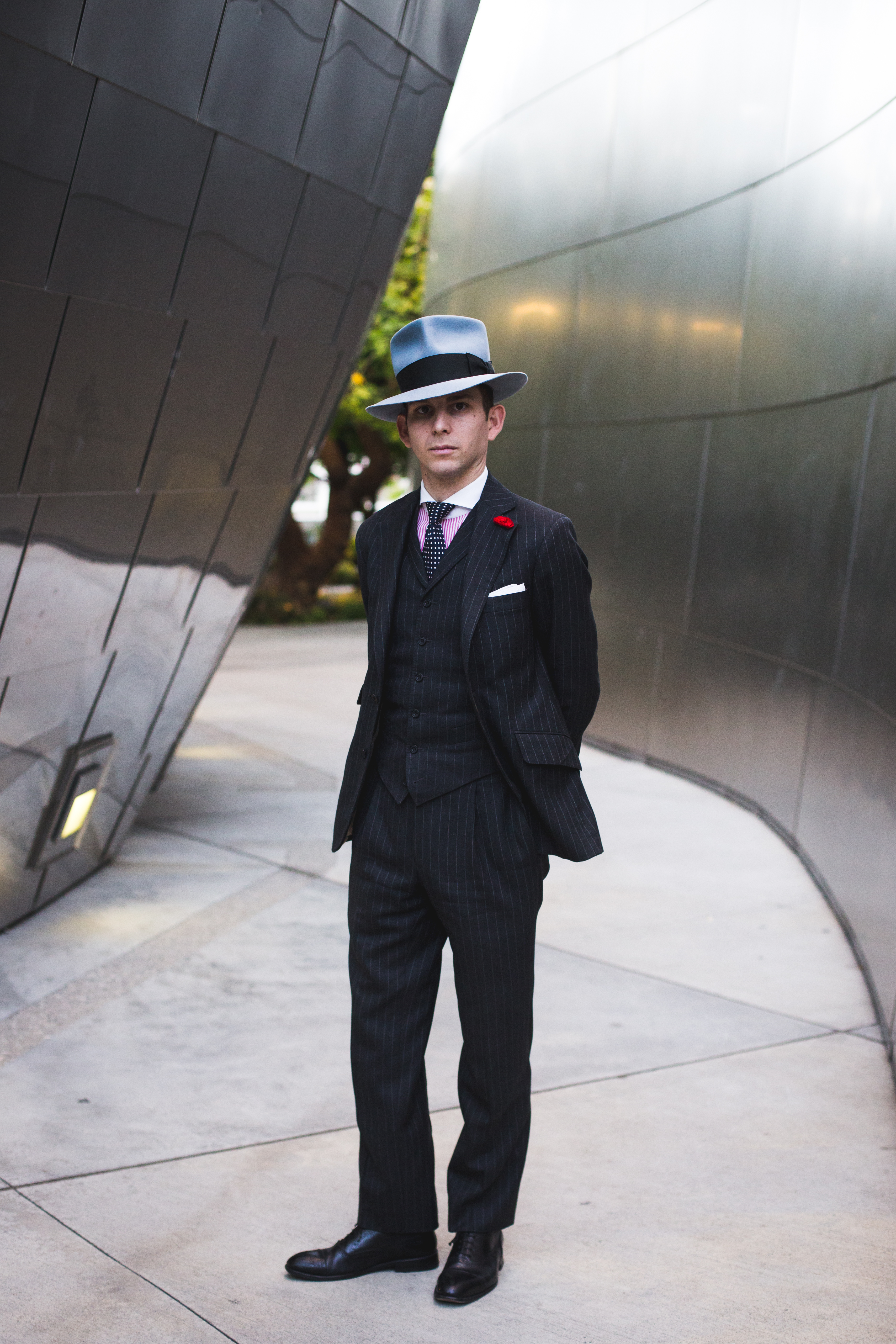 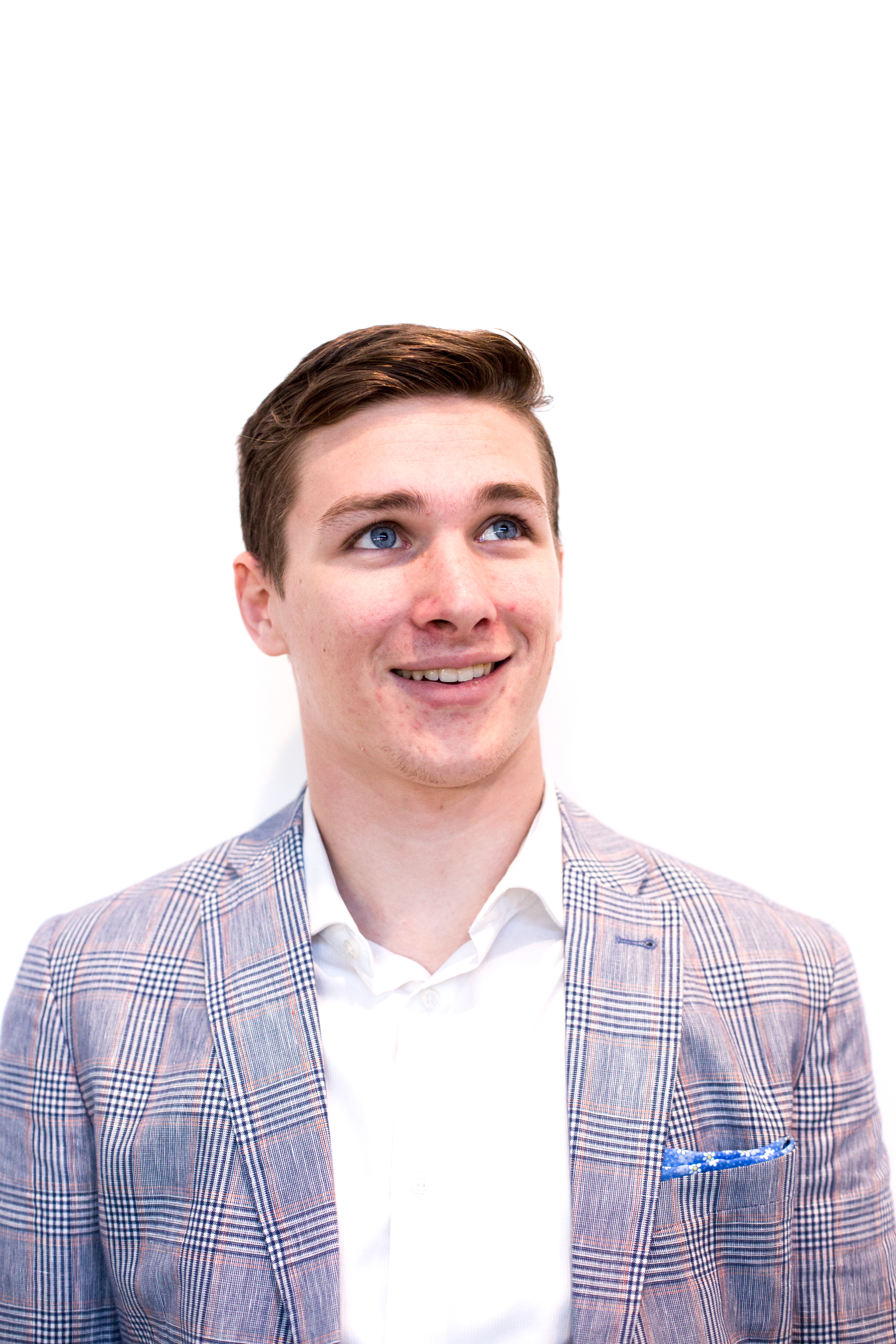 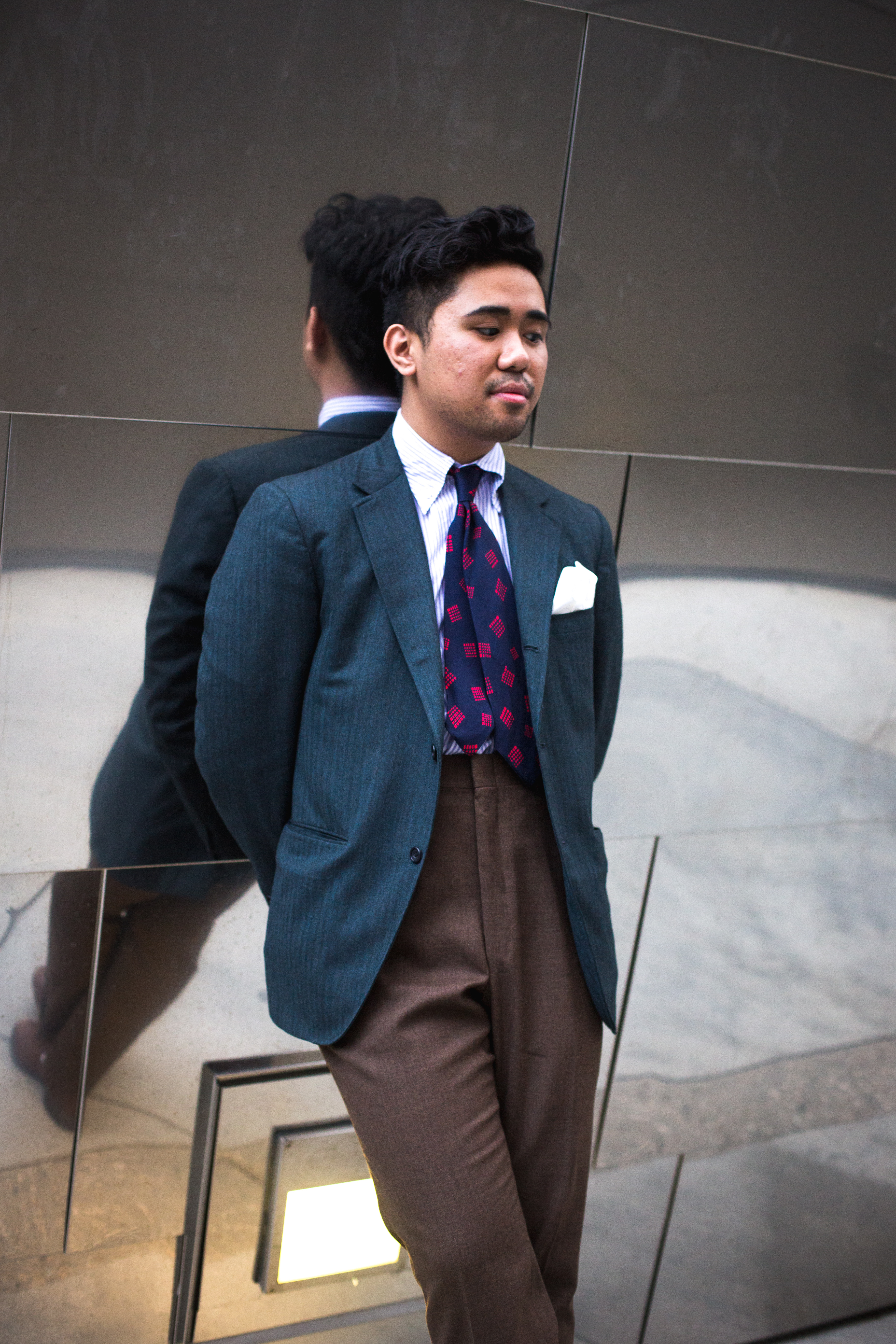 Me with some sick, moody Jake Grantham vibes. 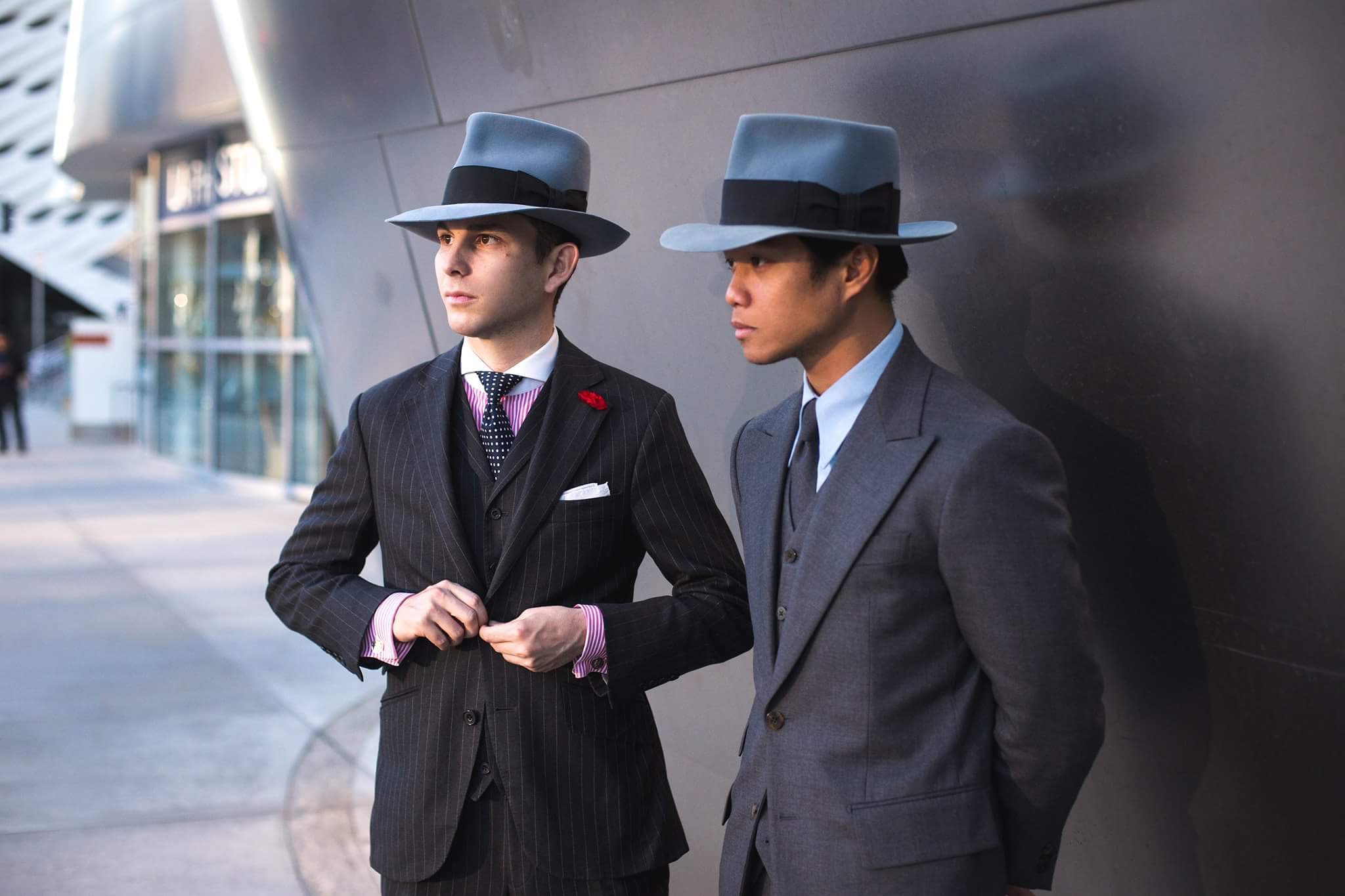 Overall it was a pretty fun day.  Nicholas and Jacob are wonderful, soft spoken gentlemen and I really enjoyed their company! It’s not everyday that you make good friends who share your passion for the classics, tailoring, and having personal style.  They’re also knowledgeable guys who are extremely cultured, yet are extremely down to earth.

The Broad was also incredible.  Learning about the artists and their methods really inspired me to get into my own craft of tailoring and photography.  I think it really rubbed off on me, since these pictures are some of the best that I’ve ever taken in my life!  I’ve never done a lot of location shooting so this entire day of shooting in the museum and next door at the Walt Disney Concert Hall was a dream come true.

Things will only get better from here, and I’m grateful for those of you who stuck with me this far.  I’m planning on more features and more stores, like Jacob and Nicholas here.  Fashion bloggers abound in LA, but there are definitely some niche guys who have great style and really exude what this blog is about.  Stay tuned!

Photography by Ethan W. and Anthony B.