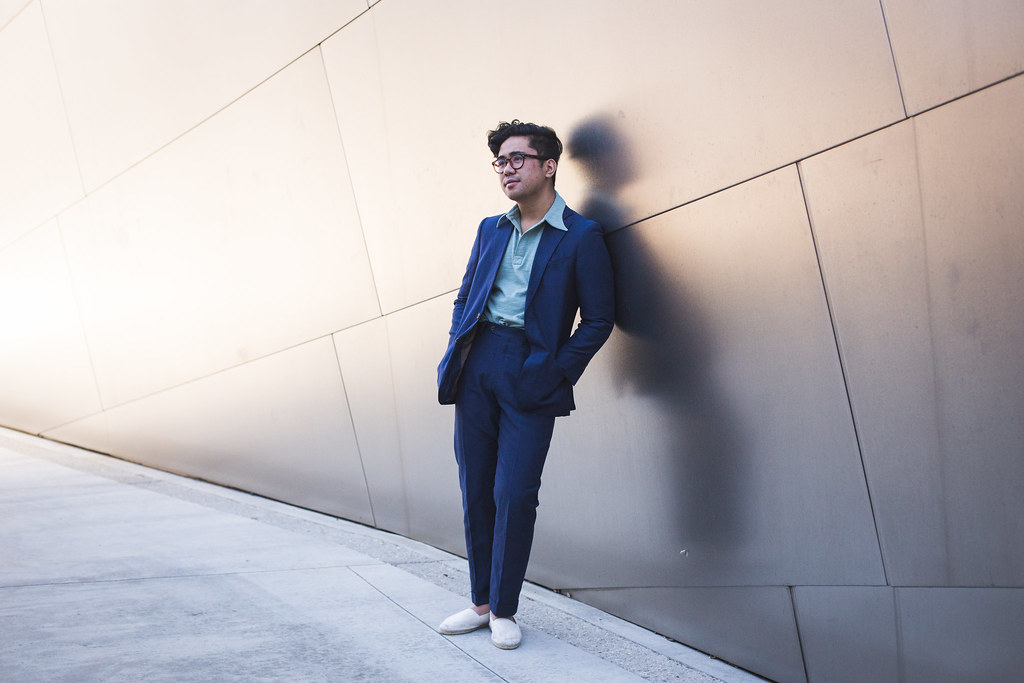 Simon James Cathcart has made a home-run again, this time creating an amazing reproduction 1930’s polo shirt.  This isn’t a sponsored post; Spencer and I fucking saved up to get these beauties for ourselves. Best of all, they work with a variety of styles, whether you want something vintage or contemporary!

The last time we talked about SJC, it was about their two-tone waistcoats.  The waistcoats were a fantastic piece that allowed me to enhance my vintage-meets-modern style and even delve into some tailored workwear.  To my knowledge, there is nothing modern (or manufactured today at least) that has the same amount of vintage detailing that SJC has.

SJC continued this by unveiling their 1930’s style polo shirt.  Remember that I am a huge advocate of the Sartorial Polo Shirt (which I have talked about here and here) and I love how guys rock the polo in ways other than this.  Basically, I love it when it’s tucked in and worn with trousers and/or sportcoats.

And yes, long sleeve polos are great too.  You’ll be able to rock them as long as you follow my rules on polos: fit like a snug (but not too snug) dress shirt, long placket, long collar.

As much as I like modern polos, there’s something missing from it.  I mean you CAN pop the collar over your sportcoat on these bad boys, but it’s not the same.  They’re also missing the spearpoint collar that was all the rage in the 1930s! Just compare it to these vintage ones from the 1920s-1940s:

Propping the collar also looked cool.  Yes, this came back in the 1970’s but I think the styling is much different.  When you get rid of the polyester, loud prints, and bell bottom suits, it looks very tasteful and classically casual. Something especially missing from modern polos are loop buttons.  This type of buttoning style is incredibly cool and like most vintage detailing, set your pieces apart from any one else out there.  It was developed by Oviatt’s, who we briefly mentioned as the king of 1930’s menswear at the Christmas party. 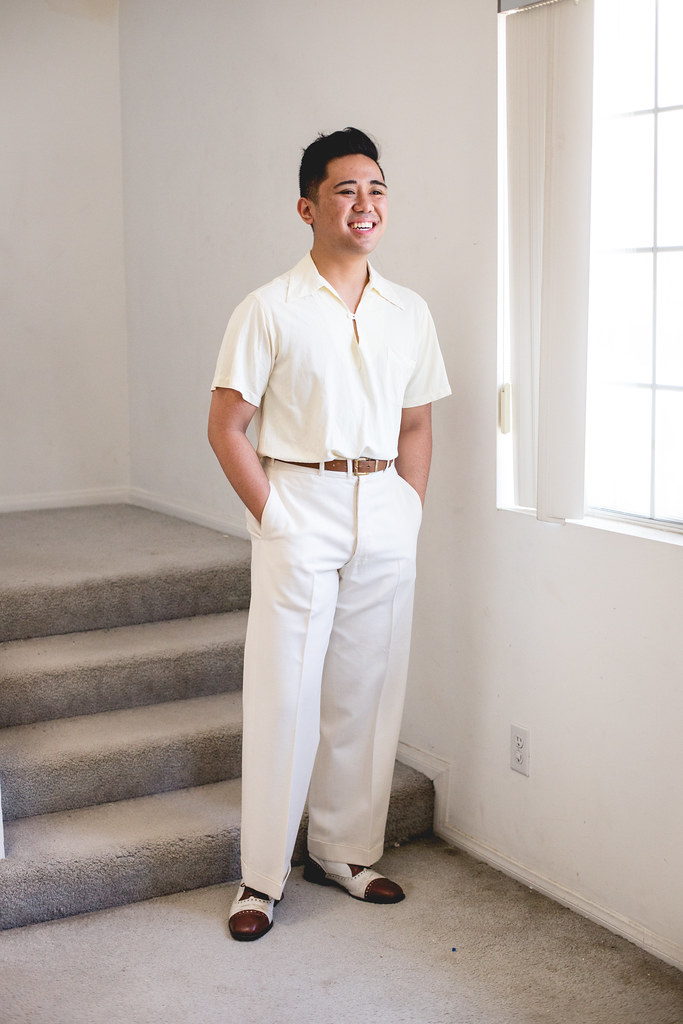 Previously unreleased image of me in a super rare 1930’s rayon polo shirt with loop buttons.

Lucky for us, SJC produced a run of different  variations of 1930’s polos, all cut from stretchy bamboo cotton and a spearpoint collar.  They retailed at around $100 per polo, which is quite pricey (since we also have to add shipping) but its comparable to other popular polos like Berg & Berg or Ascot Chang.   The only difference is that we now finally have the specific details (spearpoints and buttoning) that no one else has.  I mean you can only do so much to a polo shirt, and I feel that modern brands don’t have the balls to do something super old school like SJC.

The SJC polos were available in “regular sizes”, from XS-XXL.  They supposedly fit true to size, with some taper since these polos were supposed to be extremely form fitting as you saw in the images above.  Simon cautioned us, saying that if we were “in between” the measurements of his sizing chart, it is best to go higher.  That is why I went with a Medium instead of a Small when I ordered my two polos.

Spencer and I waited a long time for our polos (one caveat about our SJC experience), but we had been talking about what outfits to do.  Jimmy Stewart’s funny picture was one definite inspiration.  Here you’ll see them with some vintage, vintage-inspired, and modern styling, all to show you how versatile this vintage polo can be! 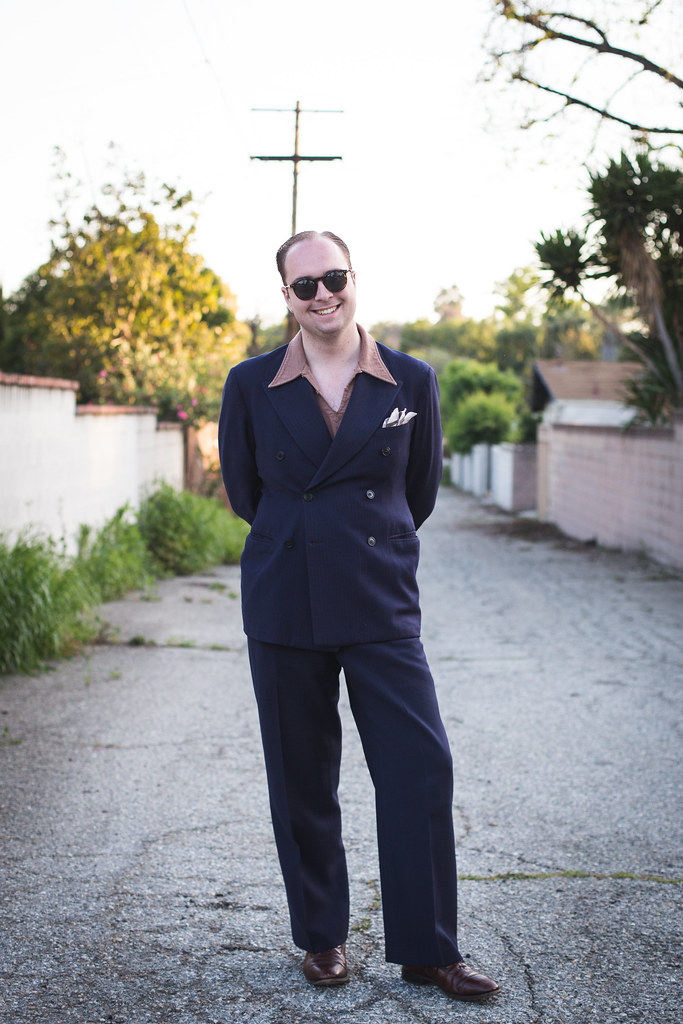 Spencer got a two button, Oviatt style short sleeve polo (which is sadly not available at the time of this writing) in a lovely light brown.  We all know how much the guys and I love brown and blue together, so he decided to go with some sartorial casual vibes and wear his polo with a DB suit.  He actually wore this to a sale at Benny’s place, which is always a Pitti Uomo of its own as guys tend to wear their “coolest vintage shit” to show off to others in the community.  I think this is a great look and totally at home for casual attire in 1938. 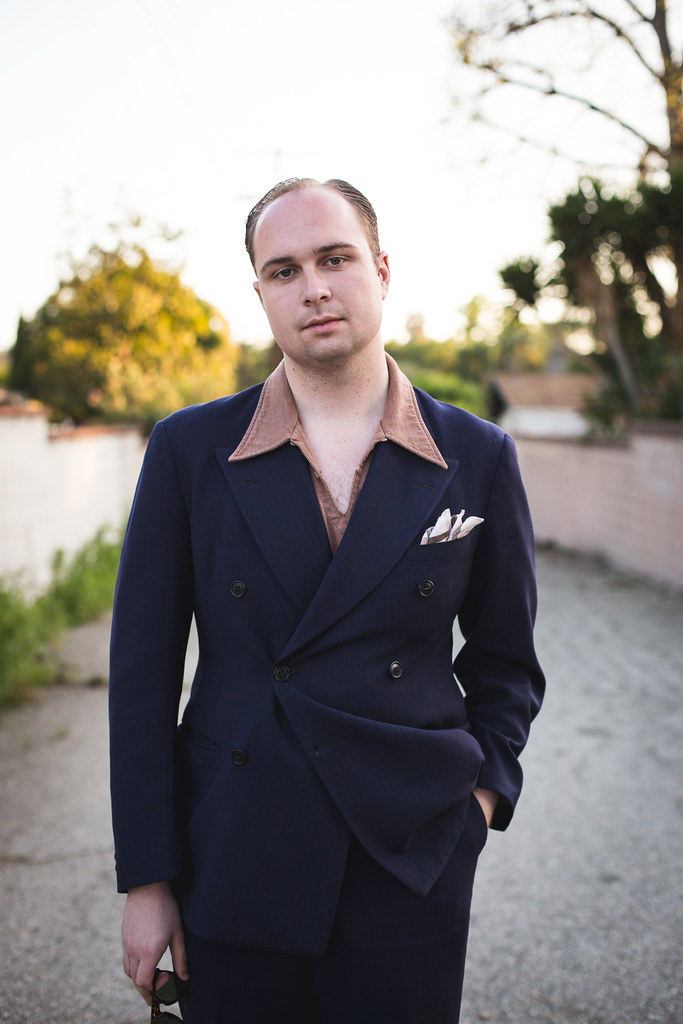 I just love the way the collar looks draped over the suit lapels. Like I said earlier, it is vaguely 1970’s.  But note that the the tapered (and slightly droopy) polo shirt collar contrasts the sharp and overly wide collar of 1970’s shirts.  It’s the small details that matter! 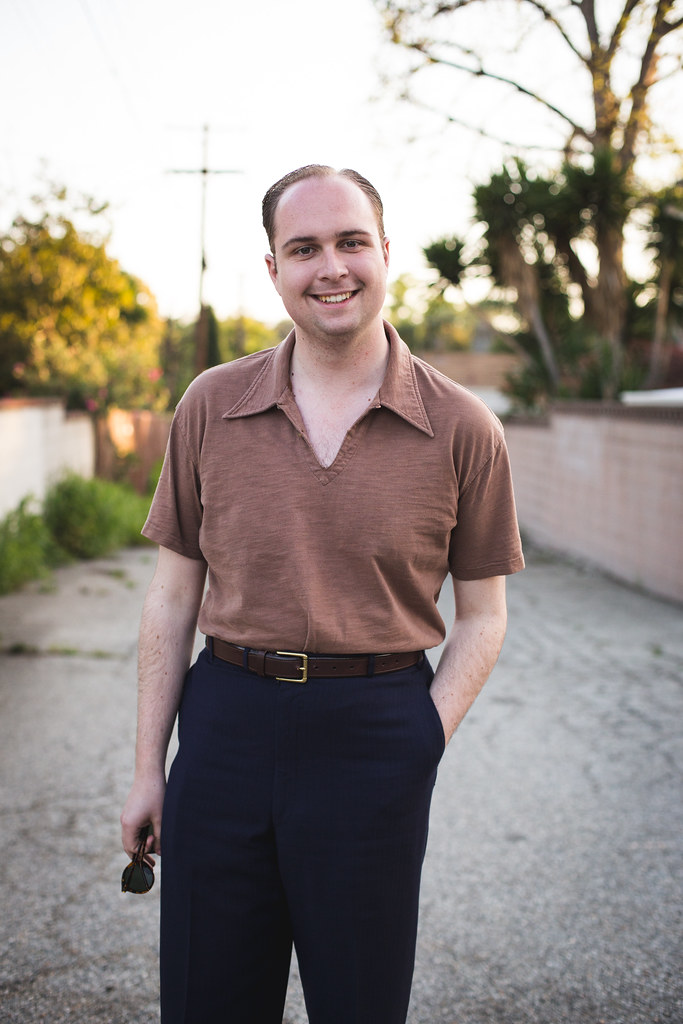 Spencer purchased a large polo (and he received his before me) and you can see that it’s slightly too big for his 6ft frame.  However I think it looks great! It’s still fits the chest well and the roomy lower half is hidden by the fact that it’s tucked into high rise trousers.   I wouldn’t dream of wearing anything exceedingly tight.  In fact, I think the polos I wore in my post last year (and the one from my Valentine’s Day post) were too tight on me.   Maturity (or my own fatness) I guess!

This polo shirt is a thing of beauty.  It’s the cream Oviatt long sleeve model with three loop buttons.  I literally felt like a golden era movie star in this ensemble. The cream was a bit bright, but I thought that it would still pair nicely with some light grey trousers and anchored down with suede single monks.  The collar spread out extremely nicely which really ties in the 1930’s sportswear look. Again, I’ll admit that it sorta has a 1970’s look to it, but I think the shape of the collar and the use of loop buttons makes it different (and much older, obviously). 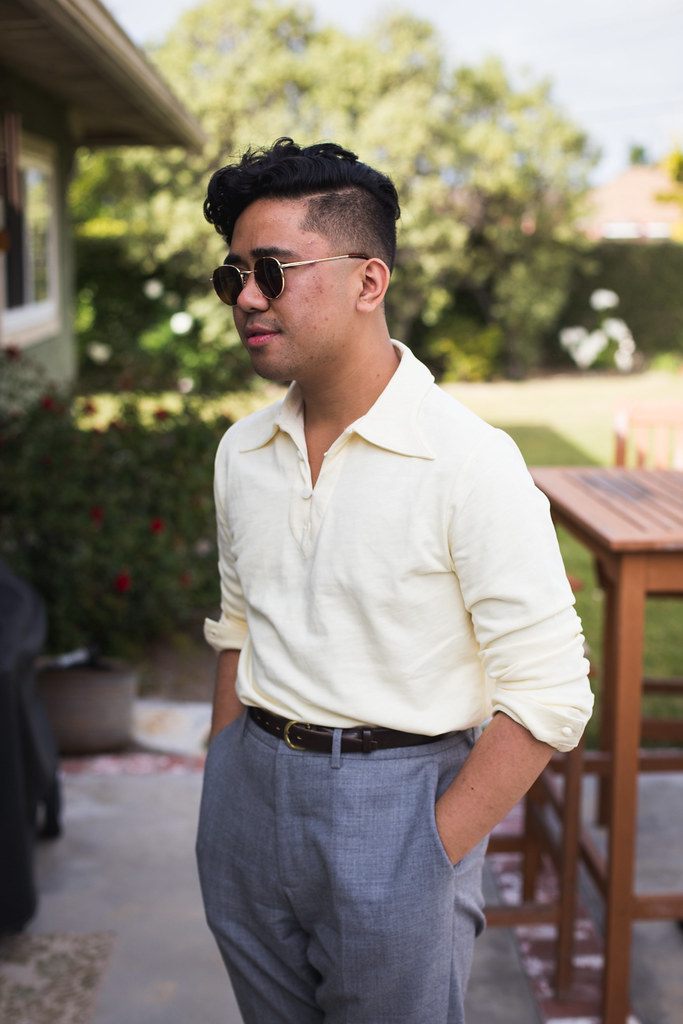 I think I prefer this fit better better than the extremely snug polos I had last year. I purchased a medium instead of small, but a part of me wishes I got small. The polo is a bit big and tucking it in only helped a little bit.  It was also very long in the body (covers my ass when its untucked)  as well as the sleeves which means that some shortening is in order; the cuffs were also loose on my wrist.   However, I think I’m going to wait until I wash these a bit to see if any shrinking helps the problem! 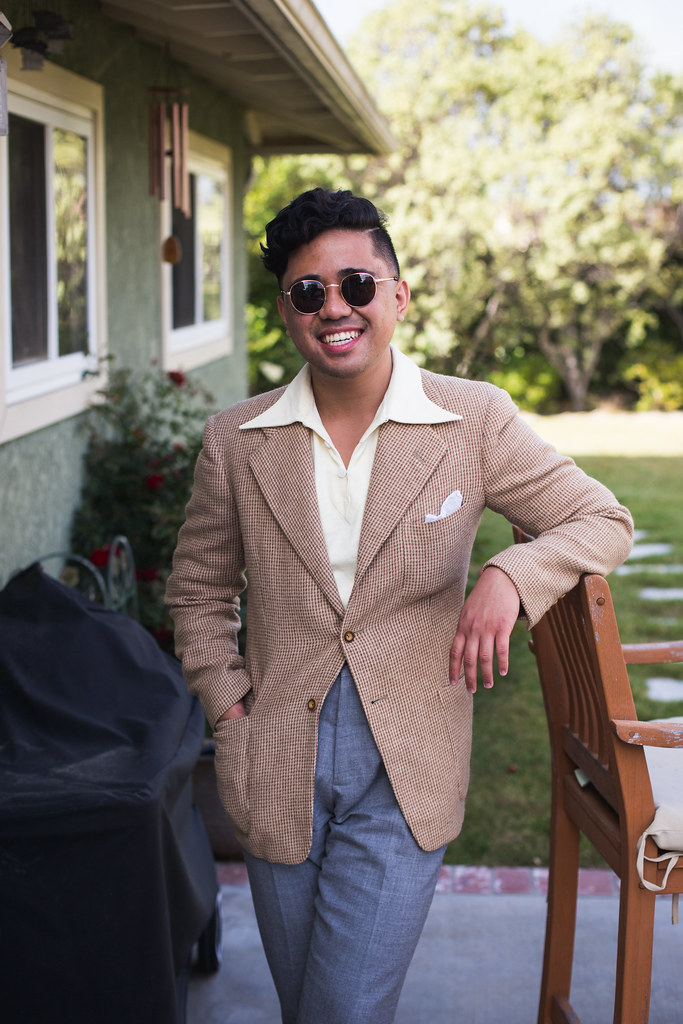 Here it is worn with a late 1930’s houndstooth, triple patch pocket sportcoat in all of its filmstar-style glory.  It even reminds me of the outfit I wore to the park two years ago!  I’d love to see this same look explored with a more modern cut jacket, as this late 30’s piece has padded shoulders and a slightly long length.  The color combination is killer, and I love how the houndstooth just pops thanks to the solids of the other pieces. 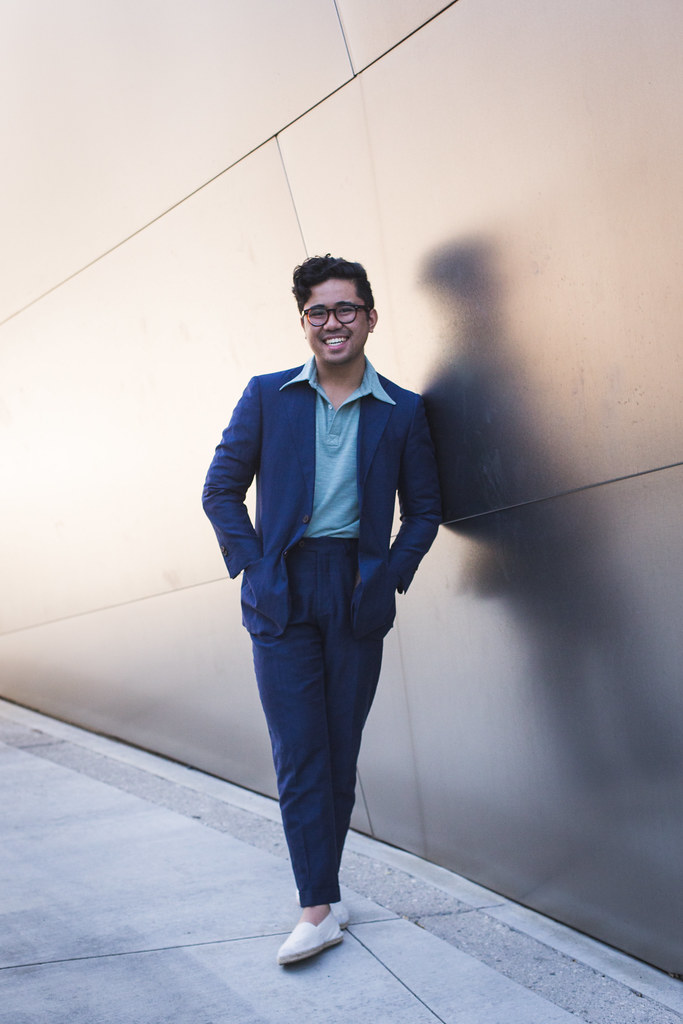 Gotta have something more modern right?  The inspiration for this came out from Andreas Larsson, the manager of Berg & Berg. He wore his deep polo (pretty good for modern!) with a navy suit and I loved it.  Unfortunately, SJC ran out of navy Oviatt polos when I decided to buy them on discount, so I went with Jade Green in a regular two button placket for some variation since we already had two Oviatt ones.  Note that both the Oviatt and regular placket were common in the 1930’s.

Like Mr. Larsson, I wore mine with a navy suit, except my suit is a Suit Supply linen/wool one.  The suit was purchased almost 2 years ago and fits a little too snugly on me (36S, not my current 38S) since my tastes on fit has definitely changed.  Still, I think it looks great, especially for casual suiting; I’d probably get more use out of the jacket than the trousers.  To finish it off, I wore my off white espadrilles to give off some modern vibes (with a bit of 1930’s beach tailoring). 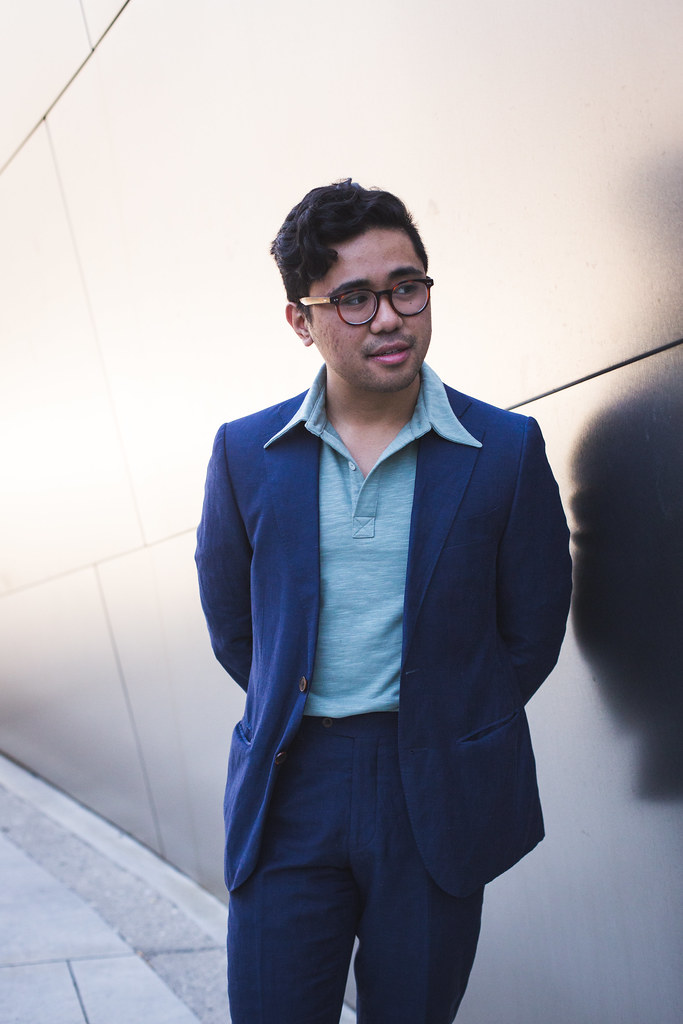 It is a contemporary look, but I think that fits the bill as a modern-meets-vintage style.  More and more guys are starting to rock polos with suits and jackets, and I like that I’m apart of that trend, even though I’m promoting the use of vintage collars.  That detail is something that many sartorial guys refuse to accept.  It just makes my personal style unique in a world where people obsesses over Italy and Britain, since I’m approaching tailoring with my accurate love of 1930s-1940s American menswear.  I mean this outfit is pretty Italian, but it’s got some of my own vintage flavor!

The entire look is perfect for casual suiting (it’s a step down in formality from Spencer’s outfit) and I’d prefer this over wearing a tee shirt and sneakers with your suit.  The fact that it’s all mainly cotton, linen, and canvas helps make things look easy and comfy. 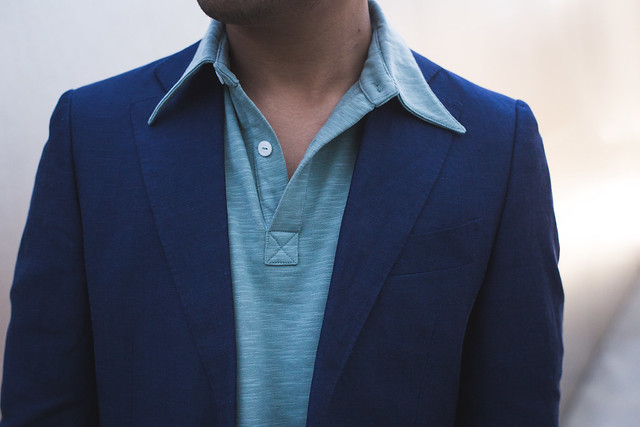 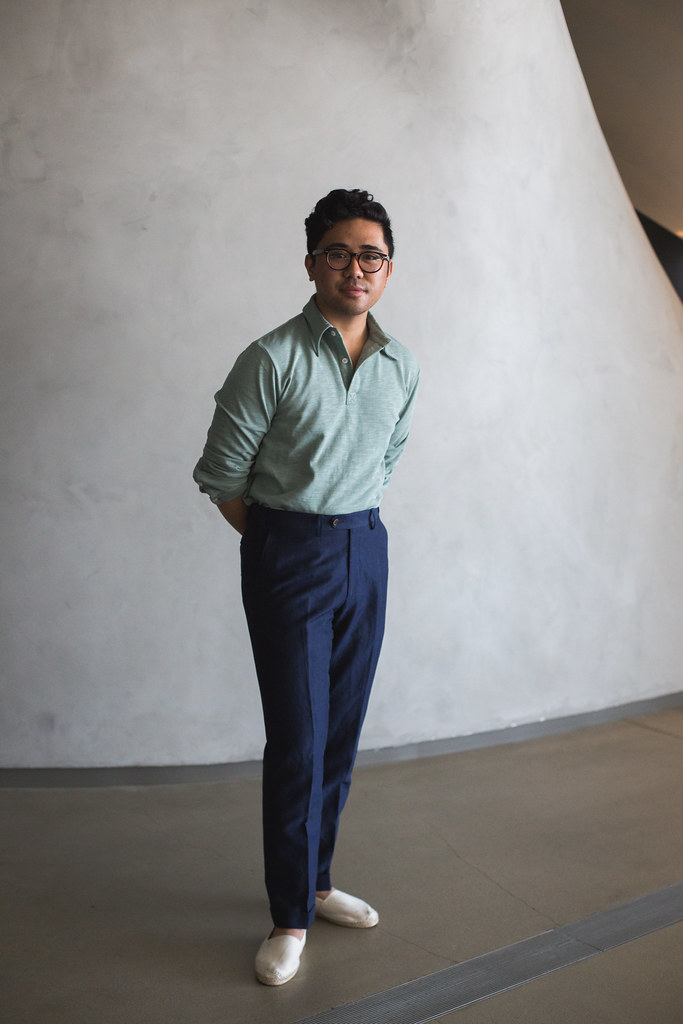 It’s even a smart look without the jacket, which I honestly prefer (the jacket looked a little “try hard”).  This look is much more in the same vein as the 1930s-1940s inspiration pictures I posted earlier! If only these pants were pleated and a bit wider; I could relax all day in this or a similar outfit. 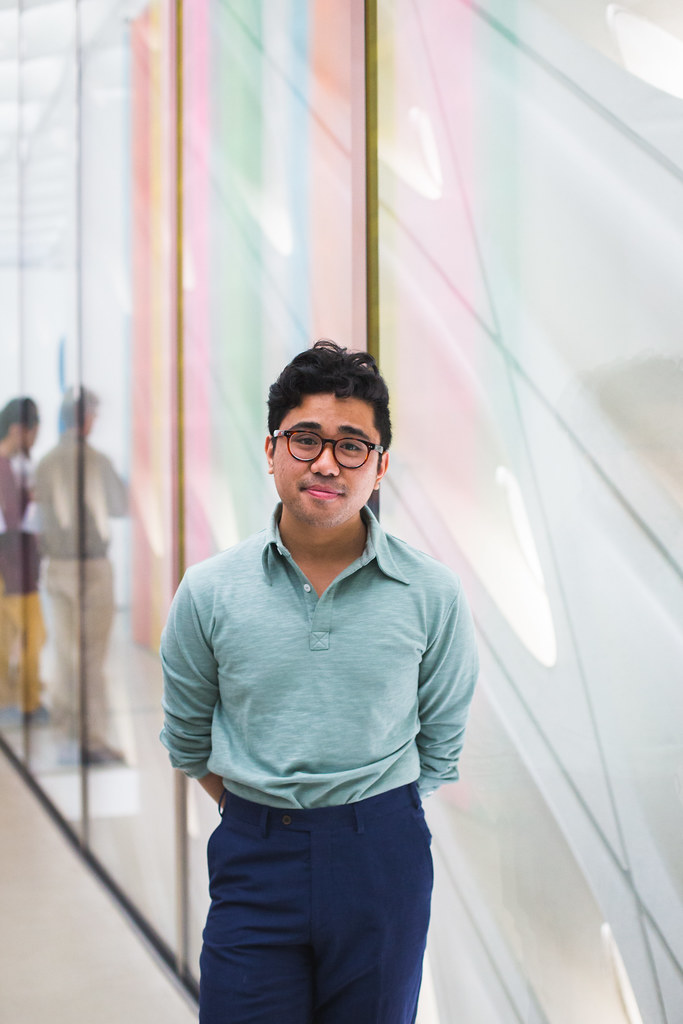 Again, the shirt was slightly too large since I purchased a medium instead of a small.  Hopefully it’ll shrink a bit when I wash them! I’ll also take this moment to voice my main complaint for this jade shirt: the damn right collar won’t stay down.  It was pretty annoying that it would curl back up.  Might be good for guys who prefer to have them standing like  normal dress shirt collar, but not for me!

Polos are definitely coming back in menswear, especially in regard to sartorial looks.  While I do enjoy wearing them with tailored jacket and trousers like the 1930’s, I think that having polo shirts in the 1930’s style takes it a step further.  We can talk about the current influence that Italian and British tailoring  has had on the classic menswear renaissance, but I like to keep things a bit different and look toward classic Golden-Era American fashion for inspiration.

I’m very happy that SJC came out with its reproduction 1930’s polos, since I finally able to commit to the polo shirt rules: slightly fitted, deeper placket, long collar.  I love being able to have some heft with my collar (propping it over my lapels is a plus) and making sure it has a deep placket allows me to keep cool.  All of these details are what’s missing from modern polos, which is why I like going vintage.  Most guys, even modern menswear enthusiasts, may not care for this style, but I love it.  I hope to wear these SJC polos for years to come!