Who would have thought that I’d be featured on one of the biggest menswear websites?  Not this guy.

I have had an odd style journey.  As I’m sure most of you know by now, I got my start by talking to vintage people. Yes, I owned a couple of GQ and Esquire magazines, but they weren’t my go-tos for style advice and knowledge.  I never heard of Male Fashion Advice, Ask Andy About Clothes, Four Pins, Dappered, Die Workwear, or even Put This On until about two years ago, right when I was starting to blog.

As I started branching out into the contemporary tailoring world, I began to  regularly go to these sites that most guys used as their starting out point.  Sure, some of the strict advice was stuff I had already heard, but it was the versatility of content and opinions that really kept me coming back.  Hell if I didn’t read through pages of MFA, Die Workwear, and PTO, this blog wouldn’t be where it is today!

Now Put This On (PTO) has a special place in my heart because (from what I’ve heard) Jesse Thorn shares a lot of similarities with me:  he has an appreciation for vintage style and contemporary tailoring, he thrifts things, and he lives in Los Angeles! His blog has certainly grown over its tenure on the internet and currently has different features like featuring guys from Instagram, writing opinion/advice pieces, and broadcasting different online sales (including eBay, which I implore you guys to use).

One type of content that I always liked was the Fashion & Style Drawings done by the fantastic artist Ryan Cecil.  Drawn in his signature style, Ryan’s work documents his own style journey here in Los Angeles!  He’s illustrated his shoe repair stories with Willie’s Shoe Repair as well as visiting the guys at Sid Mashburn and Patrick Johnson Tailors.  Such a fantastic way of using your creativity to show off menswear!

He actually reached out to me on Instagram, much to my surprise, and we initially met during my shift at Ascot Chang.  Like most of the people I surround my self with, he’s a really chill dude with an appreciation for classic menswear.  Ryan works for Cartoon Network and makes a point to dress well (not up, mind you) for the office.   Some days that includes a jacket and tie, which tend to be from J. Press or Brooks Brothers since he also has an affinity for ivy style. He’s also a fan of Comedy Bang Bang, which is my favorite show/podcast and has certainly shaped my sense of humor.  You don’t find that connection every day!

Recently, he asked me to help him with measuring jackets for eBay. While he wants to someday be able to buy tailored garments online, he really wanted to focus on how to measure his existing clothing to sell.  I had already written something to help with the former, but I thought it best to come in and help measure his clothes!

You can see an excerpt of his illustration for our meeting here:

You see the completed piece here! As you can see above, I wore the jacket from my Camoshita suit, the LVC 1878 Pantaloons, and my new Loake chukkas.  I already made a joke that I looked like Michael Hill from Drake’s.  Come to think of it, the entire outfit probably served as an example of the cool things you can get from eBay or thrifting; only the chukka boots were purchased new!

After talking with Ryan about clothing, work, and podcast ideas, I decided to take a few pictures of him!  I’m nowhere near as talented a photographer like Jaime Ferguson but I hope he liked the snaps.  I mean I could have composed an orchestral piece, but that doesn’t really have a menswear feel, no does it? 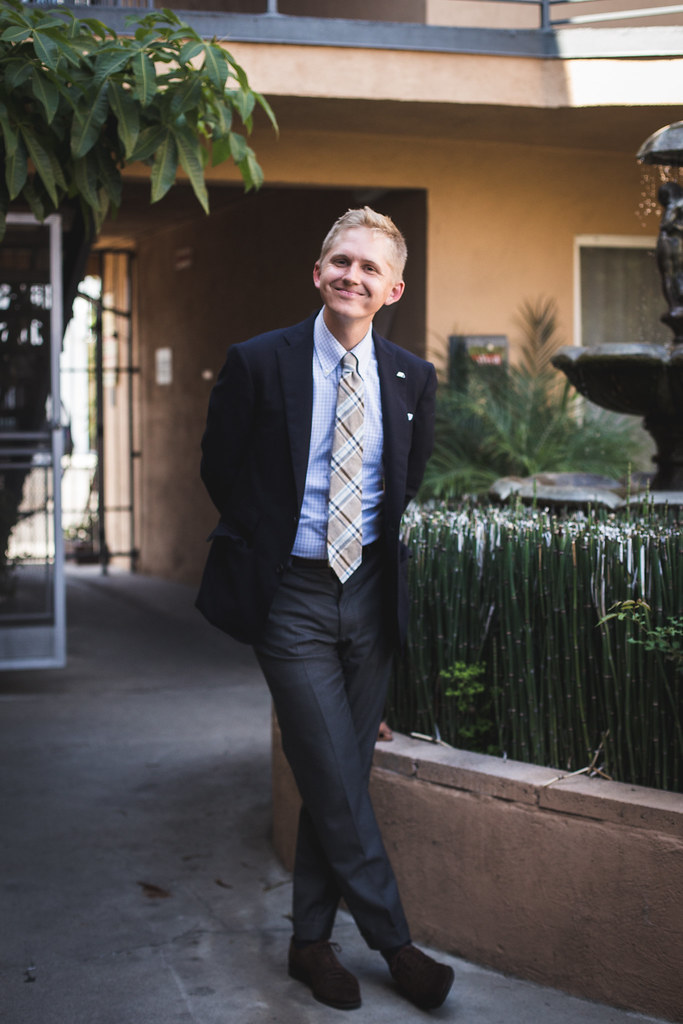 I’m in love with Ryan’s outfit.  It’s composed of pretty simple outer layers, but we always love it when guys wear a navy jacket with grey trousers.  I’m guilty of doing it multiple times simply because it’s an easy combination that is a step down from a full suit, but not as casual as wearing brown trousers or khaki chinos.  If any of you guys need advice for repeatable, safe combinations, use this as your guide. 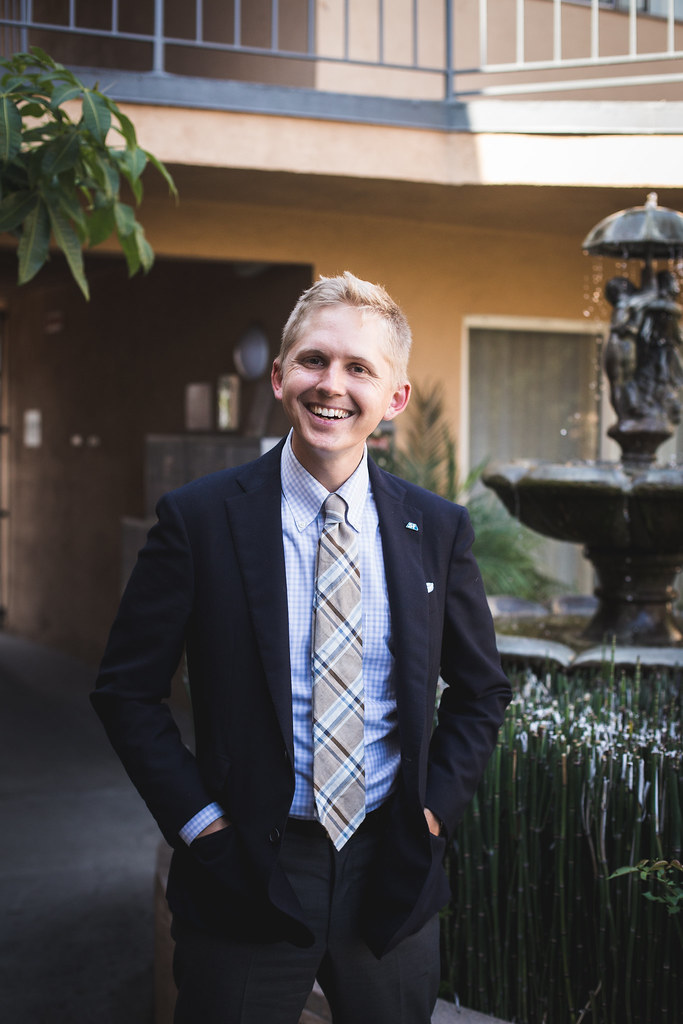 Even Ryan likes putting his hands in his pockets! 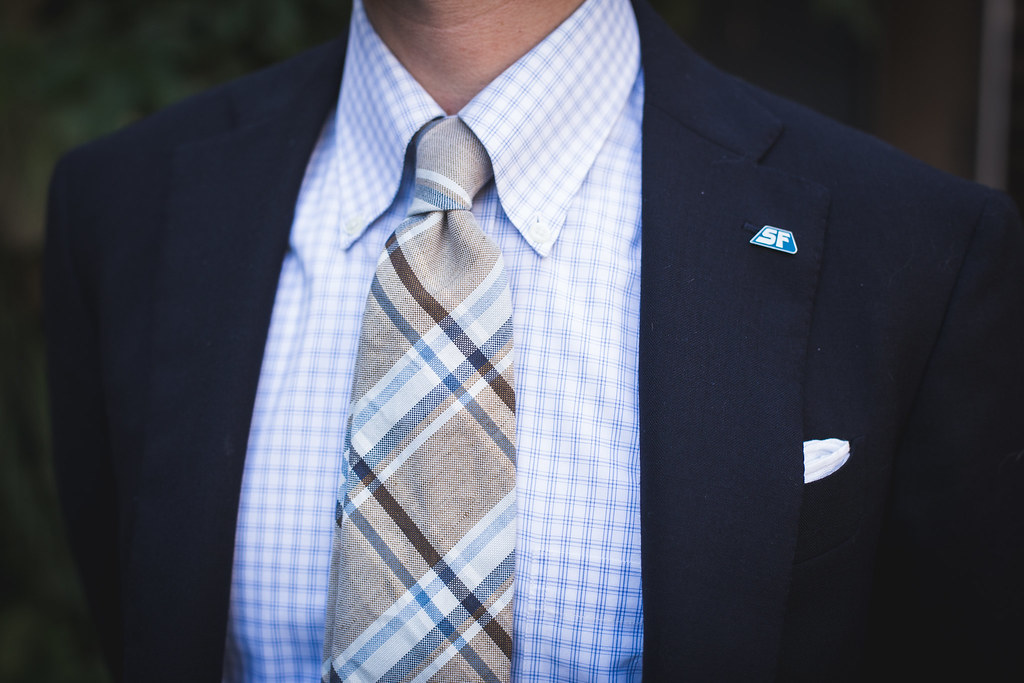 This should be shown to guys everywhere who say that you can’t mix patterns. The key (as I’ve said many times) is scaling.  He pairs a tightly checked shirt with an oversized checked tie.  The contrast is enough not to “moray” with your eyes.  I also find it cool that he not only echoes the light blue throughout his outfit (shirt, tie, pin) but the fact that he’s using a light brown tie.  Light colored ties (like yellow, cream, or khaki) don’t get enough love.

Also note the touch of personal pizzazz with the use of his own lapel pin.  It’s made after one of the comics he makes and while he does sell the pins, this particular one was made only for him!  That’s pretty cool. 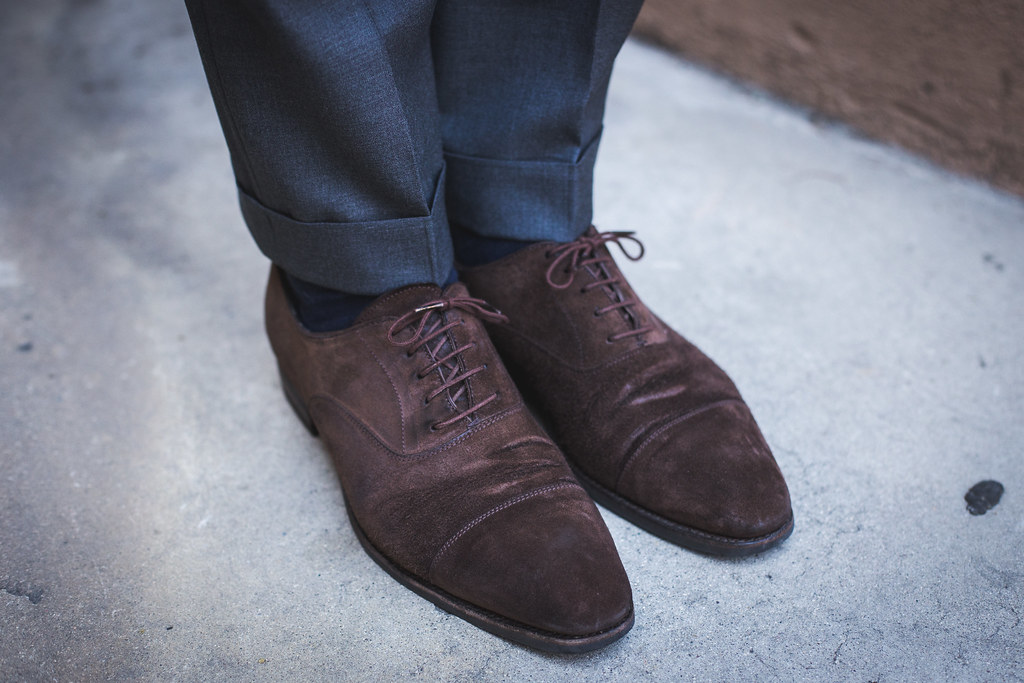 I tend to buy used shoes on eBay or at thrift stores but after talking with Ryan, it seems that I need to make a shift to buying new! One of the things he never skimps out on is footwear, and he owns an impressive Alden and Crocket & Jones collection.  I’ll have to agree; buying the Loake’s chukka and breaking them in has been a great experience.  I might just have to start buying new!

After meeting Jake Grantham during my London trip I didn’t think I’d be able to knock off another “menswear notch” for a while.  Now I can say that I have, since I have just been illustrated by Ryan Cecil! He’s such a great guy and I can’t believe that my form is on PTO.  The young kid who wore weird 1930’s suits is finally getting somewhere.