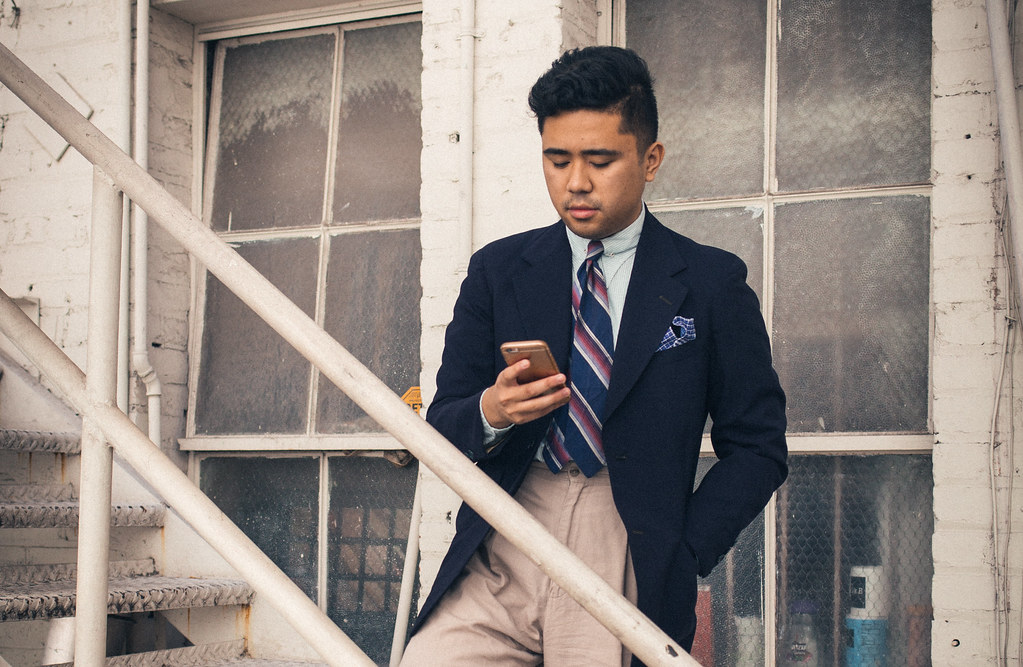 Can you believe it’s taken me this long to finally get a basic, navy blue single breasted jacket?

When I first started getting into menswear, I was enamored with patterns and textured fabrics.  This is mainly due to the fact that common mall brands never sold anything that really caught my eye.  Eventually I found vintage and thrifting, where things aren’t sold seasonal; if you found a tweed jacket in July, you better buy it because you’ll never see it again.  As a result, my wardrobe became saturated with tweeds and flannels cut from patterned cloth.  While it made for a cool closet, it meant that I lacked the basics.  Basics like a simple navy SB sportcoat.

Until writing this post, the only navy (or just blue) sportcoat was the jacket from this suit.  While it works well for F/W it just doesn’t cut it since it’s a bit too rough (herringbone flannel) and the color is a greenish-blue that makes it slightly hard to wear.  You can see it in action during my London trip (where I was dying because it was hot and humid).

I’ve even tried thrifting one, and the best I came up with was this wool-poly 3-roll-2 blazer that is perfectly ivy-preppy but slightly lacking.  I just wanted a conservative go-to that would work with any type of trouser I wanted! While I did have a completely unstructured blue suit from the 1960’s , the skinny lapels make it hard for me to wear it in outfits that aren’t casual.

Then I decided to drop by at Roxy’s Deluxe Vintage in Hollywood.  Luckily for me, she had a cool 1940’s wool-mohair jacket that measured out to be my size! For a $100, I snatched it up. 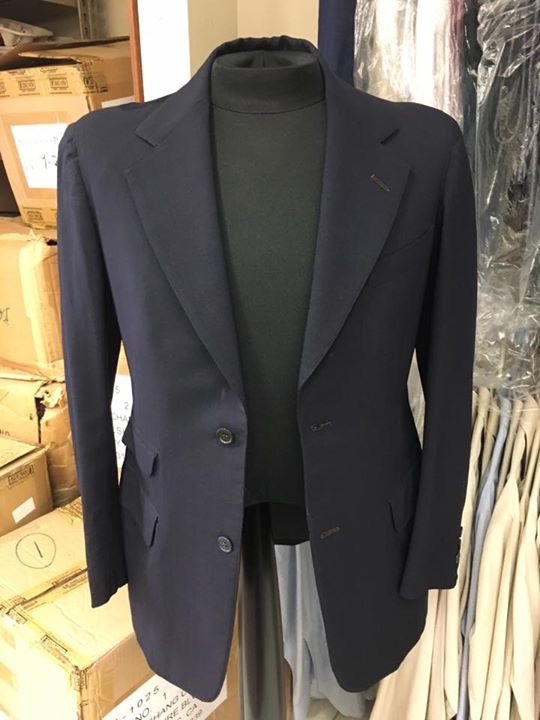 This is a picture I took with my iPhone that same morning.  It’s probably an orphaned suit jacket, due to its structure and ticket pocket, but it certainly is a beauty.  It’s dated 1941 inside and definitely has some influence from the late 30’s: wide lapels, a curved breast pocket, severely nipped waist, and a conservative button stance. The padded (read, boxy) shoulders point toward the influence of 40’s tailoring.

What I love most about this are the lapels.  You’ve probably heard me talk a lot about lapels in the past, but nothing really beats 30s-40s lapels. These feature 5″ lapels and have a low notch which you never see today.   Yeah, this jacket is blue and pretty classic but I also bought it for its lapels.

As I said, the fabric is a wool-mohair blend (it feels scratchy) that is pretty worsted.  By that I mean that it’s smooth to the touch (but not as smooth as twilled gab) and isn’t hairy like flannel or tweed.  This is going to be a great navy jacket that will definitely be worn with everything. 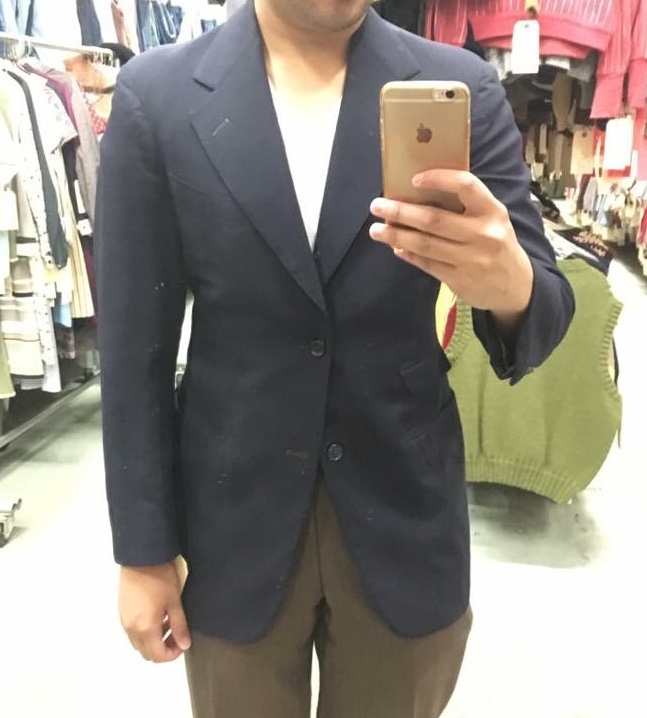 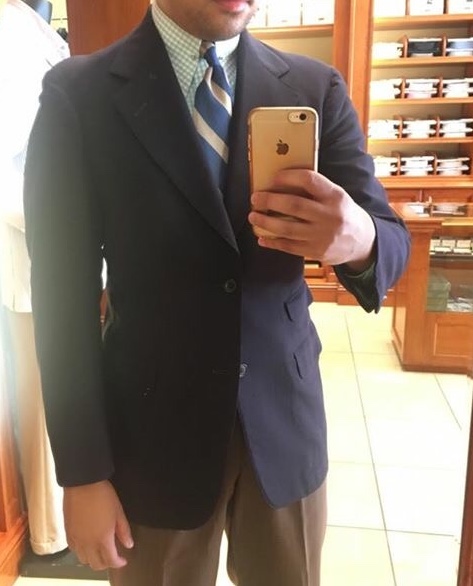 As you can see, it fits like a glove.  Well, maybe a skin tight glove.  I’m just wearing an undershirt in the picture and while the button isn’t pulling, I could feel the jacket right on my sides.  The amount of drape and waist suppression was insane; the jacket also had high armholes that actually made it uncomfortable to wear.   I definitely  wasn’t feeling the shoulder pads, since I wanted a navy jacket that I could wear with trousers, chinos, and denim.  You can tell that while I do like vintage clothing, I’m not a fan of all of the details that come with it.

I knew that I would have to get it altered before I’d wear it happily, so I  made some time to bring the jacket into Ruben’s Tailor Shop. 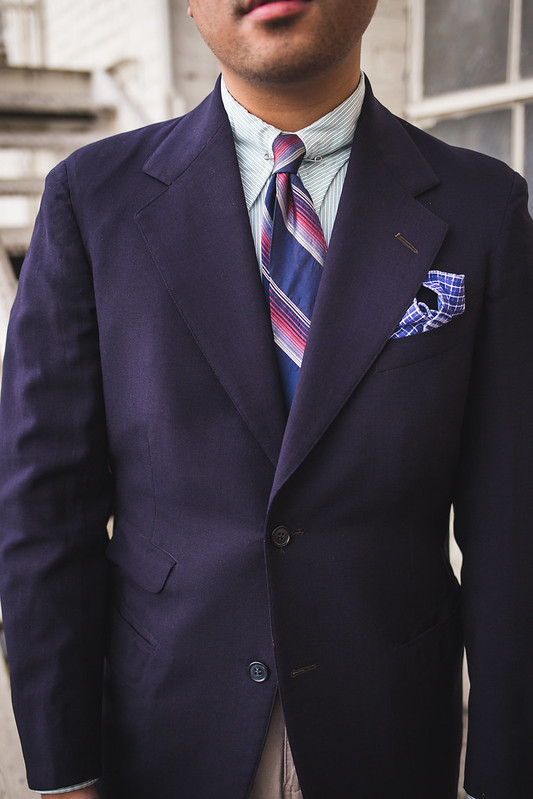 Here is the jacket after the alteration.  The first thing you’ll notice is that the shoulders have been heavily reduced.   It’s much less structured and a bit easier to wear with modern pieces now!  There is a touch of padding right at the sleevehead and I haven’t yet made up my mind to remove them; I’m concerned it might make a dropped shoulder.  However, it’s okay for now. 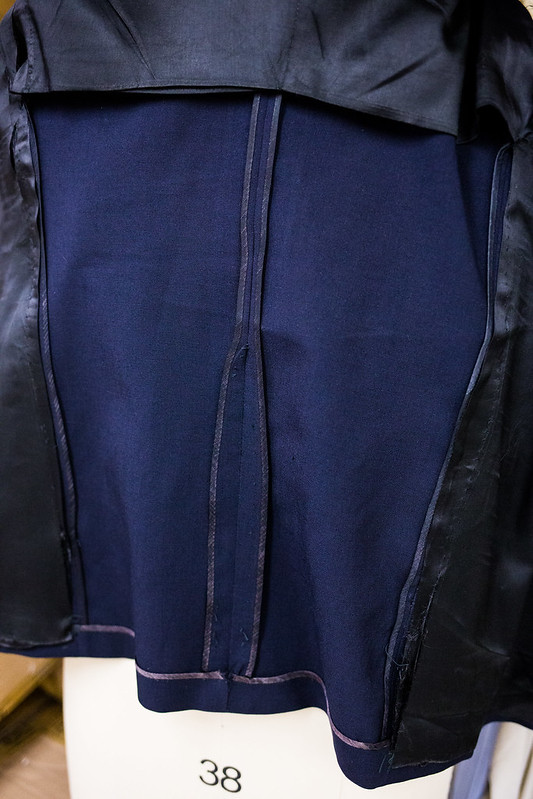 In order to make the jacket more comfortable and still retain its figure, he let out the chest and midsection. That’s why the inside allowance on this half-lined jacket is less at the top and expands near the bottom (since nothing was let out at the hips).  He also was able to “let out” the armholes to make them less high and more comfortable to wear around the armpit.  I didn’t even know that some jackets had a fabric allowance in that area!

I want to note that the jacket is pretty heavily worn.  It’s more apparent on the inside, but I really don’t mind.  It doesn’t ruin my enjoyment of the garment, nor does it make it impossible to wear. 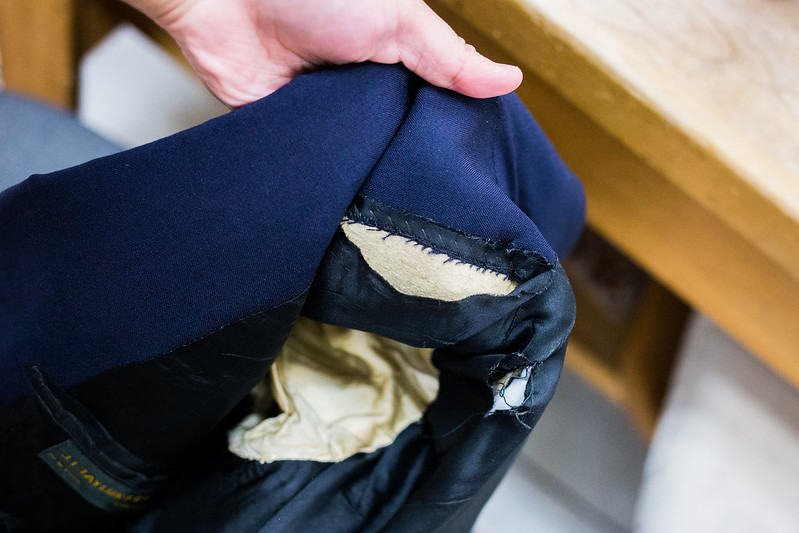 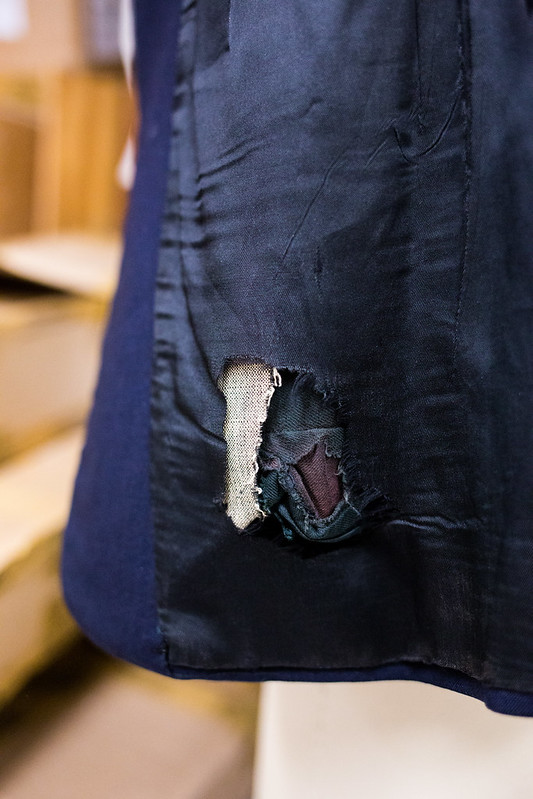 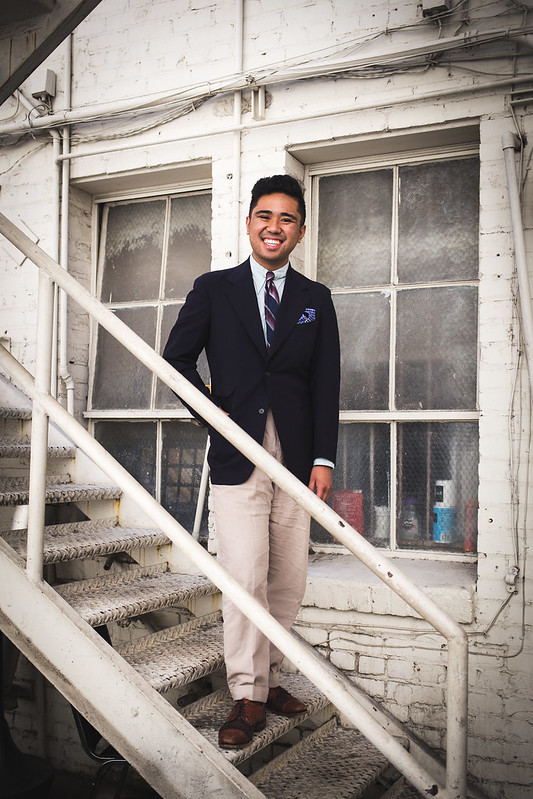 For its inaugural outing, I went with a fairly simple “Ethan ensemble”: navy jacket, brown trousers, and some stripes in the middle.  I am just in love with the shape and color of the jacket!  It goes smashingly with these thrifted and pleated linen trousers while still maintaining an air of elegance and slight conservatism Much different than if I went with a jacket that was lighter  and more “summery”, which I feel is more in line with GQ and other #dapperbros.

It’s hard to see in the picture, but the lapels really point to the “power” of the jacket.  The wide lapels (with a low, angled notch) create a sharp V down the chest, which I really like and is one of the reasons I love vintage designs. The button stance and waisting still create a slim body, but it doesn’t look too uncomfortable, right?

I just like how the look is incredibly 1930’s inspired (thanks to the wide fit of the pleated trousers and collar bar) but the outfit as a whole is definitely not out of place today.   There’s a reason why we like blue and brown here on Street x Sprezza. Note that it doesn’t look too preppy! 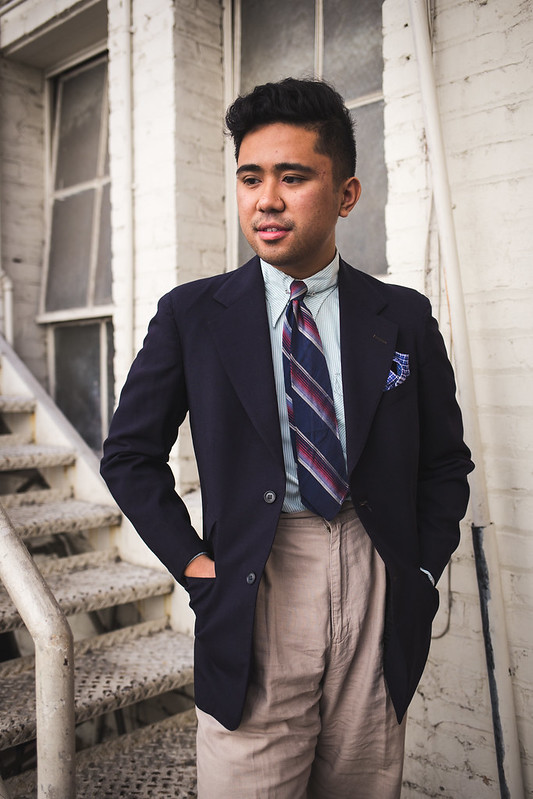 You just know that ya boy had to go with stripes on stripes.  It’s been pretty hot this past week in LA (mid 80’s) so I went with some lighter colors  in the shirt and tie in order to off set the dark blue.  You can sort of see it in the picture above, but I picked a green striped spearpoint and a blue and red striped tie.  Nothing too crazy, yet for some reason, modern guys don’t like these combos.  I mean there have been other combos that I wont’ even dare to do.  I think the colors complement each other and the contrast between tiny and wide stripes work well!  I added a checked pocket square for some diversity as well as to ground the blue.

I’m extremely happy that I’ve finally obtained one of the quintessential pieces of a classic menswear wardrobe: 4-season a navy blue SB jacket.  Hard to believe it’s taken this long!  Even though it originally was tight and had massive shoulders, it’s actually wearable now, thanks to Ruben.  You can probably expect to see this jacket  a lot more since I’ll be wearing it with everything, from linens and chinos to flannels and worsteds.  Nothing beats a blue jacket.

With that said, I will always be on the the hunt for an even softer jacket.  A navy jacket that has unpadded shoulders and patch pockets would be great though I’d prefer one in a cotton, linen, or fresco instead of a flannel or heavier worsted (as I tend to find).  The jacket in this article is good, but it’s only a step in the right direction.  I’ll definitely make another blog post once I find that item!

Perhaps it’ll be a bespoke commission…?