I loved this look, so I replicated it.

Most guys who are into classic menswear can cite G. Bruce Boyer as one of their inspirations and sources of knowledge.  I unfortunately can’t make that statement.  When I first got into menswear (more specifically vintage, as it was what I was into first), I didn’t read any books or even any GQ articles. Instead, I was just on tumblr, taking note of all the details and styling cues I saw.  I obviously went on great tumblrs like Golden Era Suits and The Workshop, as they reblogged countless images from the 1920s-1940s featuring not only movie stars but regular people; I also looked at illustrations by Laurence Fellows and countless catalogue scans to get an idea of what people wore.   Once I got into the vintage community and started adding people like Benny on Facebook, I was able to ask more direct questions. My journey into classic menswear had a similar experience.

Almost two years ago, I started seeing pictures of the Armoury and B&Tailor on tumblr and began to study.  I saw that they too wore high rise trousers (with a slight taper). I noticed their use of repp and foulard ties.  I even noticed the subtle differences between different bespoke tailors.  Eventually I put my love of vintage and classic menswear together, and here we are.

So as you have seen, I have no really encountered much of the venerable G. Bruce Boyer until much recently.  I’ve seen him pop up in different style pictures (like ones posted on the Armoury’s tumblr) as well as his interview with Articles of Style.  Only now do I know the heavy contributions that this man has done for the current menswear world.   Some of my ivy friends and connoisseurs of contemporary tailoring have fawned over his works and his natural style (read, sprezzatura).  I’ve never met him, but I’m sure he could correct and school me on almost everything I’ve written here with his vast knowledge.

God, I’m pretty much ignorant to the point of fault when it comes to this man.  I mean, how can a guy who writes about vintage and classic menswear not read a work by G. Bruce Boyer??

So while I haven’t read anything from him (other than his top 10 style commandments, which are compiled ad nauseum by countless bloggers), I think that at the absolute base, Mr. Boyer is  great source of inspiration. That shouldn’t really come as a surprise. I don’t really have authority to say what his style is (as I’m sure that he has probably stated it somewhere), but I personally find it as a mix between classic american style with some rebellion thrown in.  That’s probably fitting as he has written a book called Rebel Style.

You’ll see that his outfits are extremely classic with just a dash of personal fun.  Again, you could probably say that is sprezzatura.  His attitude toward style is something I want to exude in my daily dress. 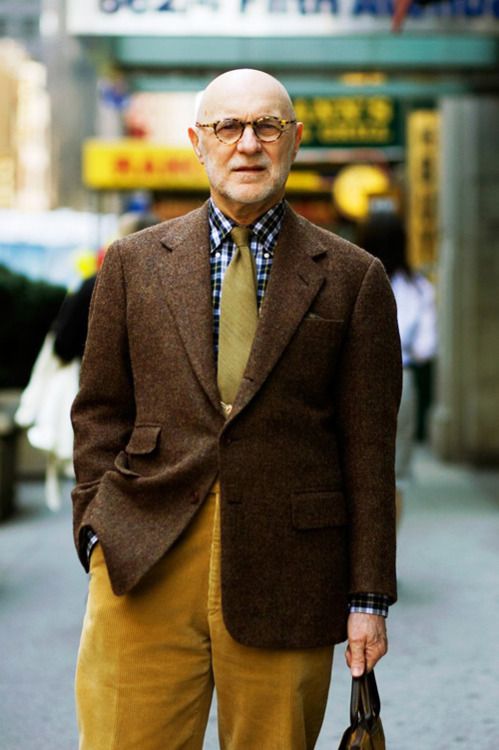 You can still wear a checked dress shirt and make it look classic, instead of going full GQ.

I loved this photo set, taken by FE Castleberry for Mr. Boyer’s article on the sleeveless cardigan.

Now we’re going to take a look at one of the best outfits I’ve ever seen.  I’m pretty sure I saw this before I even knew who this man was!

G. Bruce Boyer is photographed in front of the Armoury NYC wearing a vintage M-43 field jacket over a separates combo.  Now I know that my previous article on layering an M-43 got some flak for pairing something casual with a suit, but I think this particular variation is more at home.  It’s probably due to the use of differing colors and textures.

The colors are fairly subdued, but there is enough contrast so that the jacket or trouser doesn’t blend in with the jacket. He doesn’t do the “Ethan shirt+tie Combo”, but things are still interesting enough with a light blue shirt and a light brown wool(?) checked tie.  I’m pretty sure that the sportcoat he’s wearing is the same green windowpane one we saw in the other pictures above; I like that it’s a different shade of green while the red windowpane allows for some subtle visual interest. Of course, he finishes off with the classic grey flannel trouser and a well worn brown fedora.  Don’t forget that he put his hands in his pockets!

Now the use of a field jacket over any form of sartorial clothing can be weird for some, but I definitely enjoy it. Not only does it add a slightly rugged aesthetic to the clean lines of classic menswear, but it’s also functional.  Depending on the weight of the cotton, it can be a great fall layering piece that is useful if you’re expecting some light rain.  Obviously a trenchcoat or parka will do a better job in heavier downpours, but for a “normal day”, a field jacket will do.  I’d also use it over a wool overcoat (if it’s not too cold) but the thing I like most is the amount of pockets.  Most coats only have a few pockets, but they aren’t exactly made for the utilitarian.  I’m not a huge EDC guy, but I love bringing my field jacket on photography stuff.  Much easier than bringing a bag around. 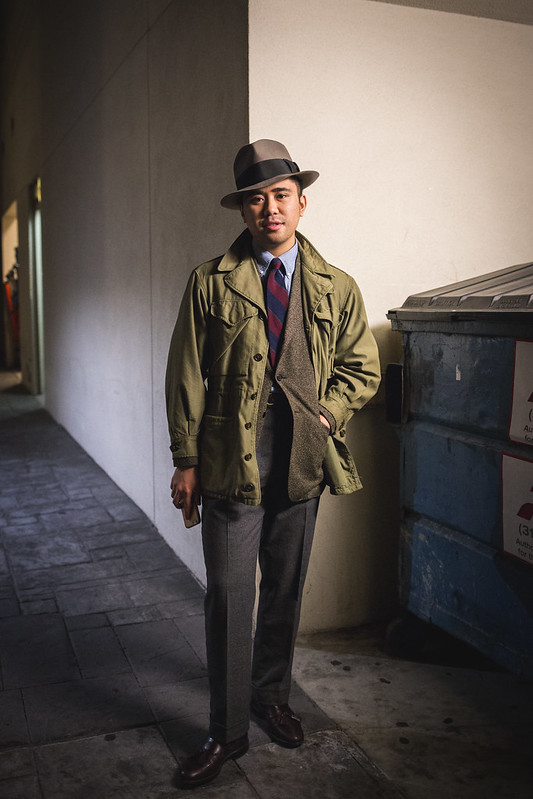 My take on Mr. Boyer’s outfit is largely similar, but with some obviously Ethan affectations.  My field jacket is much more worn than his, and provides a slightly frumpier appearance that I enjoy.  I keep the pleated grey flannels, but I add in my Camoshita fleck suit jacket, as I don’t own a green/red windowpane sportcoat.  I like the use of this jacket here since it provides a stark contrast (light green vs dark green) and adds more visual interest thanks to the fleck and slightly crunchy texture of the wool/silk fabric. 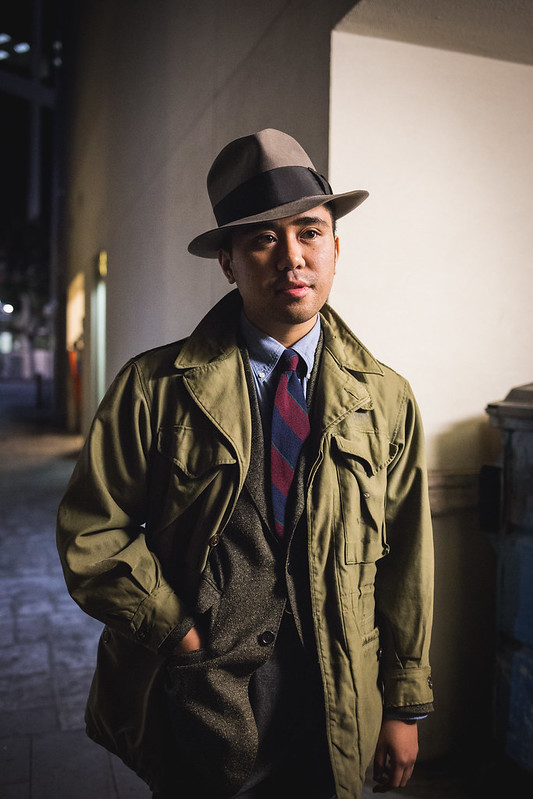 I don’t own “normal” spread collar shirts like Mr. Boyer does but I wanted to stay in the “casual sartorial” realm for this outfit.  Instead of my typical spearpoints, I went with this thrifted steel blue button-down collar shirt that almost evokes the color of a chambray or denim shirt.  For an ivy throwback, I threw on a red/blue block stripe 1940’s tie that is woven from a scratchy wool and even features frayed edges, akin to what you’d see from old western ties or from Post-Imperial.

My fedora from the Wellema Hat Co. isn’t as worn in or brown as Mr. Boyer’s, but it’s rapidly becoming one of my favorite pieces.  It’s actually more of a greyish-brown than a true grey, which allows me to wear it with a variety of different outfits, whether they be formal or casual.  Wearing it here reminds me of a 1940’s noir film even though I’m in a field jacket and not a trench coat.  The dramatic lighting (a result of me procrastinating my picture taking time) definitely adds to that aesthetic. 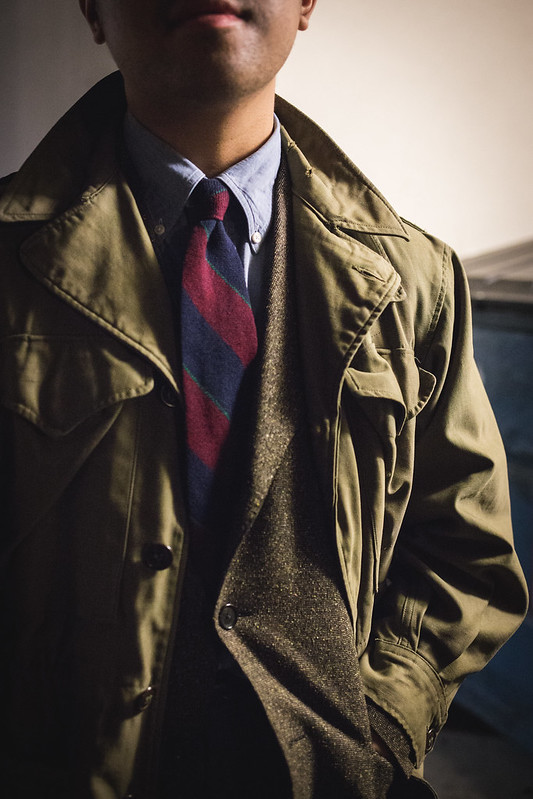 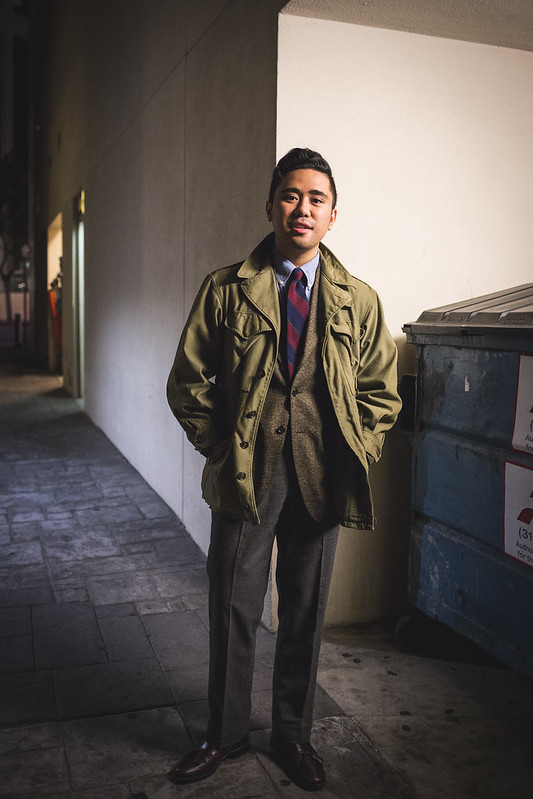 If you feel that the fedora is a bit much (which I can agree with), you’ll be pleased to see that it looks perfectly fine without it.  The outfit is literally just a typical Ethan-Separates-Outfit with an M-43 field jacket and fedora added on top.

I think this is the proper way to layer a vintage M-43 field jacket on top of tailoring. As I’ve explored more in my style, I can see that attention to contrasting and textured fabrics is better than to just throw the jacket on any old suit.  You’ve gotta pair it with more interesting items, since the M-43 is rugged.  I will say that denim would have been a good trouser combo, though it would have been too casual for the look I was aiming for.

Now, I think I really have to do more homework on G. Bruce Boyer.  Based on what I’ve learned so far (and seen of his style), he really exemplifies the ethos of my blog: there’s a firm understanding of menswear history, inspiration of it put into practice today, and a dash of playful rebellion against conventional dress.  I’ll definitely keep you guys updated as I learn more about this man and his work.