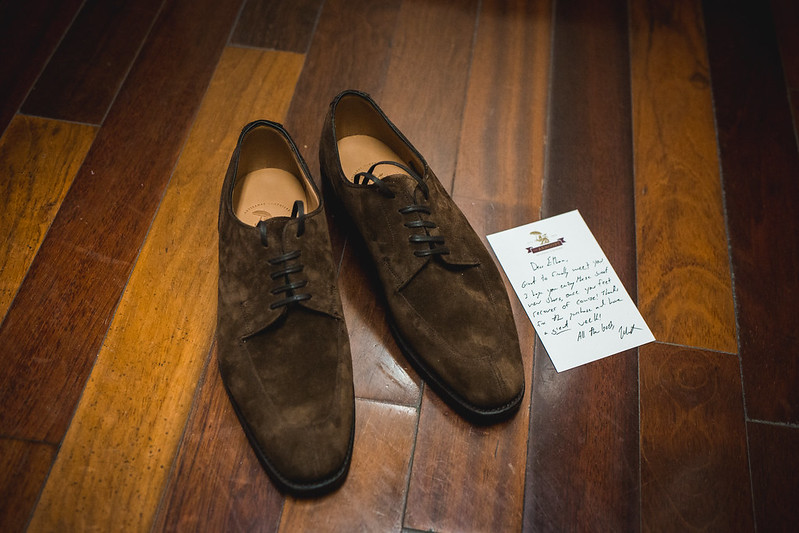 Time to talk about the best “treat myself” I’ve ever done, courtesy of my NYC trip.  It’s honestly not a real review so much as me gushing over some amazing shoes that I actually bought for myself.

As you guys know, I’m not much of a shoe guy.  I mean I like shoes and have quite a few, but I don’t really go out of my way to buy new ones (the fact I have a lot ensures that they last quite a well).  I’ve been lucky enough to review some great ones like the 51 Label pennys and the Meermin Oxford as well as treat myself to Loake chukkas and the P204 wallabee.   I’ve been pretty content with my shoe collection, but that sentiment changed when I went to the Armoury during my NYC trip a few weeks ago.   If you didn’t already guess, I ended up walking out with a pair of shoes, made under their house label!

For those of you not familiar with the Armoury, they are a 3-location haberdashery that curates some of the best menswear in the world.  Stocking RTW from Ring Jacket, Drake’s, Liverano, and Alden (to name a few), they are one of the first menswear ateliers that have really revolutionized the modern classic menswear market.  In fact, bringing these brands under one roof was something unheard of back in the early 2000s.

While they have a giant selection to retail, they’ve come to be known for their special collaborations with their partners, developing models exclusive to the Armoury.  For example, while Ring Jacket has been making soft 3-roll-2 suits, the Armoury pieces are designed with a wider lapel, slightly modified button stance, and an extended shoulder.  This has now extended to the Safari Jacket they produce with Ascot Chang, a few shirts from Drake’s, and a few other pieces. Now, however, they’ve begun selling products that are made under their own private label.   Shirts were their first foray I believe, but this has now moved on to shoes, which is the focus of this article.

Yohei Fukuda is one of the best shoemakers in the world. A student of the Tresham Institute, he’s worked for Edward Green and George Cleverly and eventually started his own brand.  Like a true artisan, his handcrafted shoes are only made a few times a year, with prices dependent on the level of order (though RTW options can be found).  Honestly you should just read this article from Shoe Gazing, since it’s a lot more detailed.  The Armoury made it possible for Fukuda-san to do custom order trunk shows introduced him to a wider range of customers. Personally, I wouldn’t have known about him if it wasn’t for them!

Fukuda-san’s shoes are amazing.  He obviously prefers a chisel toe, but it looks perfectly natural on these lasts, providing for an elegant silhouette that matches the leather well. I really don’t know what else to say except how beautiful they are. 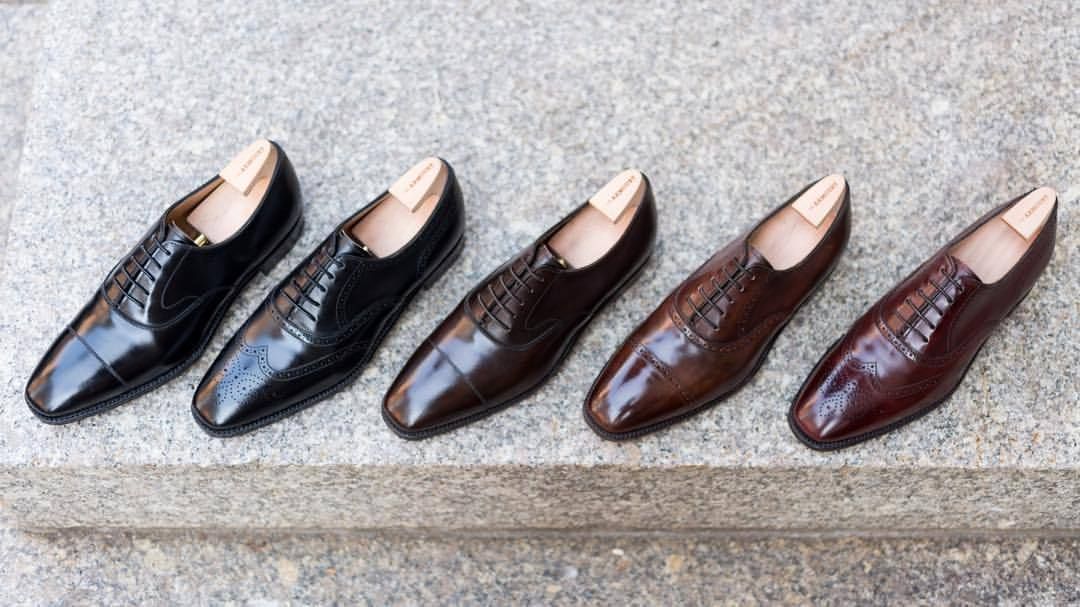 Like I said earlier, the Armoury has moved on to producing small quantities of private label to coincide with their regular stock.  The Armoury shoes are designed by Yohei Fukuda, as a truer collaboration between the maker and the store; these RTW shoes are manufactured in England.  As you can see the last is sleek and elongated, similar to what Fukuda-san normally does.  Based on an old last found by Armoury co-founder Mark Cho, the racecar-esque last has a widened ball for comfort.

All of their shoes are imitation brogues and captoes, which means that the uppers are made of one piece of leather rather than different pieces stitched together (which is common for non-wholecut shoes). The result is a more comfortable shoe since your foot only comes in contact with one piece rather than several. Please do read the Armoury journal post on these shoes to get a deeper understanding of these amazing pieces.

Also, the shoes are priced at $495, which is really a steal for what they are! For many, it’s an affordable way to experience Yohei Fukuda designs without going all in on bespoke.

While the first models were conservative brown oxfords and captoes, the Armoury recently unveiled a suede split toe derby named the Jubilee.  If you follow them (and Mark Cho) on instagram, you’ll see that they’ve been working on this model for a while.  The Haijame last is the same as the others, though this has open channel stitching and a 360 welt.  It really treads the line between casual and formal, though with the last, it leans a bit more toward the latter.   The stitching for the split toe is pretty subtle, especially when you compare it to the heavy set ones found on the Alden ones. Again, you’ll notice that the Jubilee has a longer, chiseled last compared to the Aldens or even the ones from Saint Crispins that the Bryceland guys wear.

My boss Justin Chang was one of the first people to buy the Jubilee! 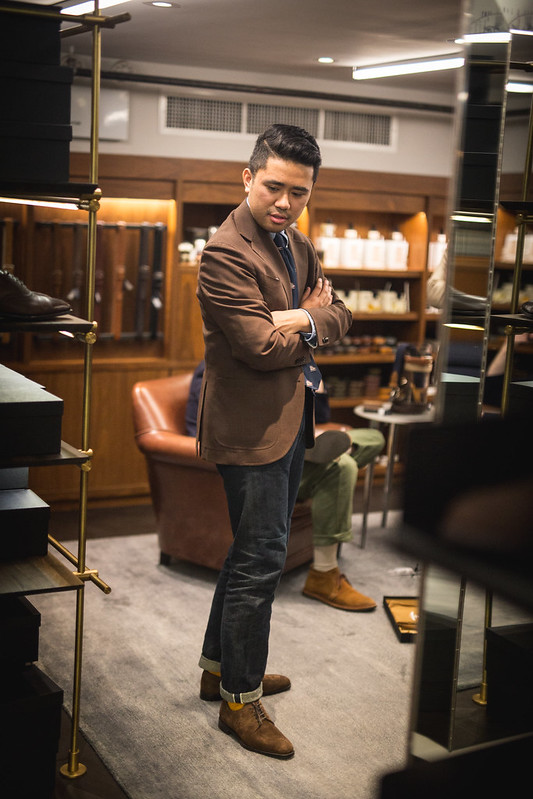 I got to see the Armoury shoes in person, but I was really drawn to the Jubilee.  I’ve been really digging split toes (and derbies in general) since they feel a bit more ivy (or straight up Drake’s), working well with separates.  I’ll always like loafers, but my feet are small and wide, so it makes it a bit tough to find the right size, especially since you can’t tighten a loafer the same way you can do a lace up.   Plus, I like the challenge of wearing a derby, since it’s usually chunkier and more rugged than a tassel.

While I was initially hesitant due to the last (long shoes don’t work with my small feet/statue), I copped the Jubilee much to everyone’s (my friends and the Armoury) delight.  It’s the first time I’ve spent over $250 on a shoe, but I knew that this was going to be a great investment and addition to my shoe rotation.  It’s not too formal (my Meermin Oxfords barely get use since I’m always in separates) but it has the ability to be worn with casual suits like cotton and flannel (once LA actually cools down). 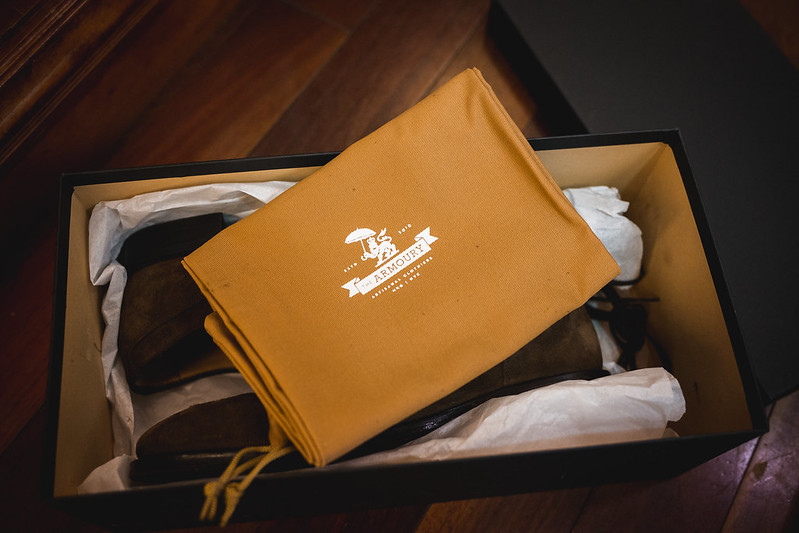 I received my pair a few days after my trip.  If you’re wondering why I had them shipped, just imagine only taking a carry-on for a five day menswear trip; I literally had no room for them in my suitcase.  Included with the shoes was an Armoury dustbag and a lovely note from Max, who wished me happiness with my new shoes as well as hope that my feet were finally healed from all the blisters.

I went with the 6UK (so a 7US) since it was a pretty snug (but comfortable fit). I briefly considered the 6.5 but Max reminded me that suede breaks in really easily and he was concerned that they might end up being too big. 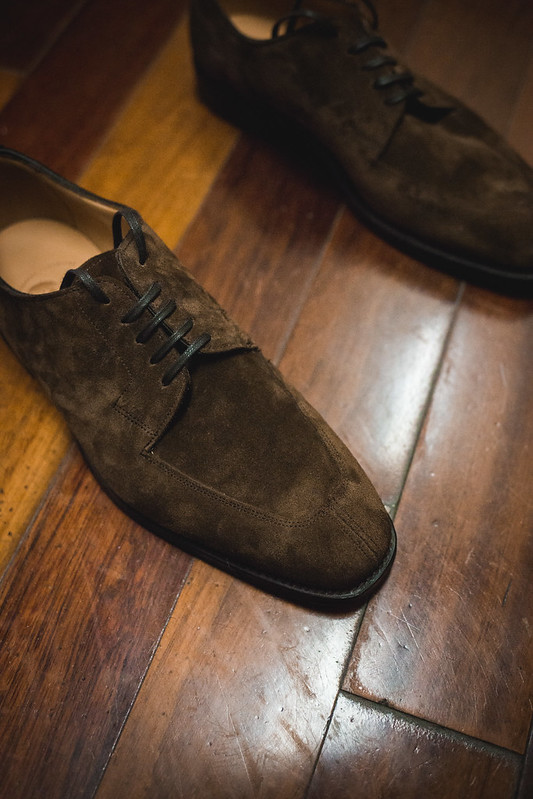 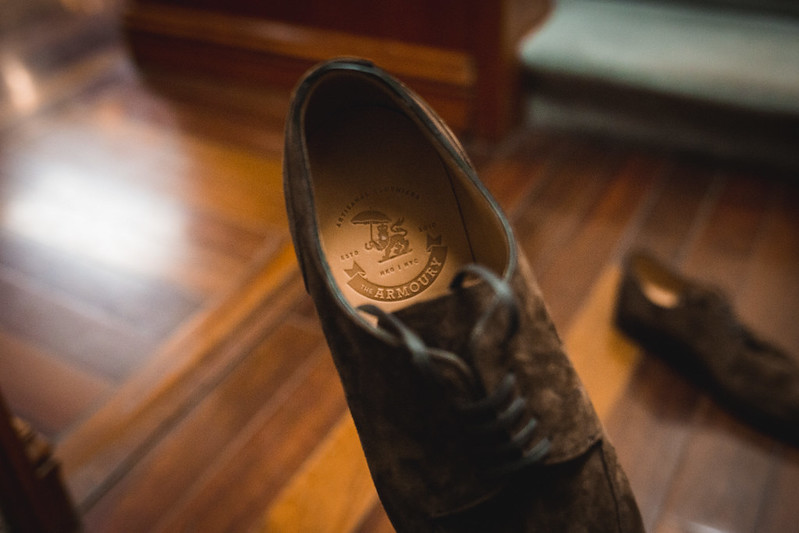 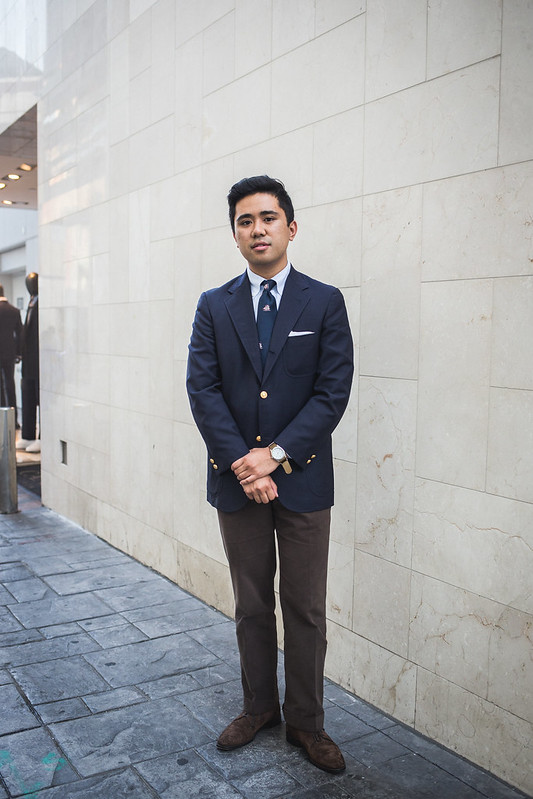 The first official outings of the shoes was with this ivy separates combo. It’s pretty understated but something that I’ve been digging lately. Uncharacteristic of my personal style, the entire top half is all blue!    The jacket is a 1970s poly-wool blazer that I can’t wait to wear more as it gets colder; the shirt is Kamakura (purchased during my short NYC trip last year) and the tie is a ship motif club tie gifted by my friend Stephon. 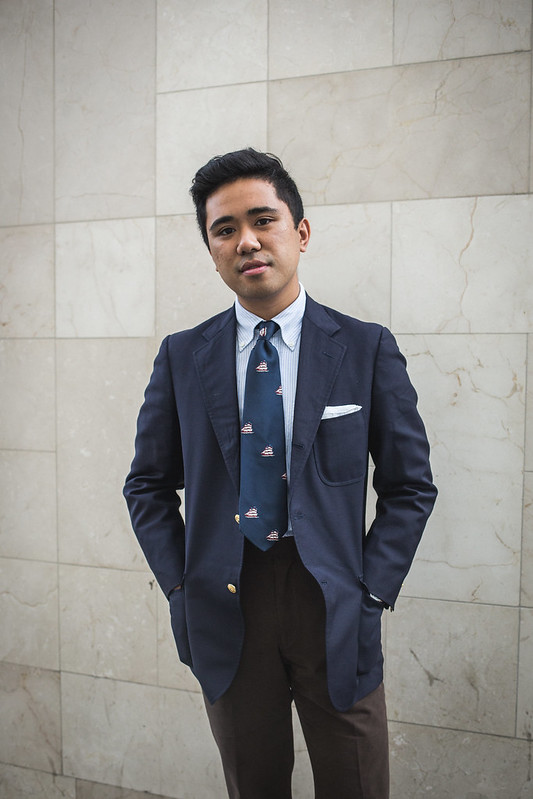 It’s definitely a lot more trad than I’m used to, since I prefer to wear multiple colors or even a foulard in place of a club. It’s still a nice look that compliments the shoes well.   If I wanted to go more fall/winter, my chocolate cords would’ve been a great choice, but the still warm LA August weather necessitated my stoffas (which are rapidly becoming my absolutely favorite trouser). 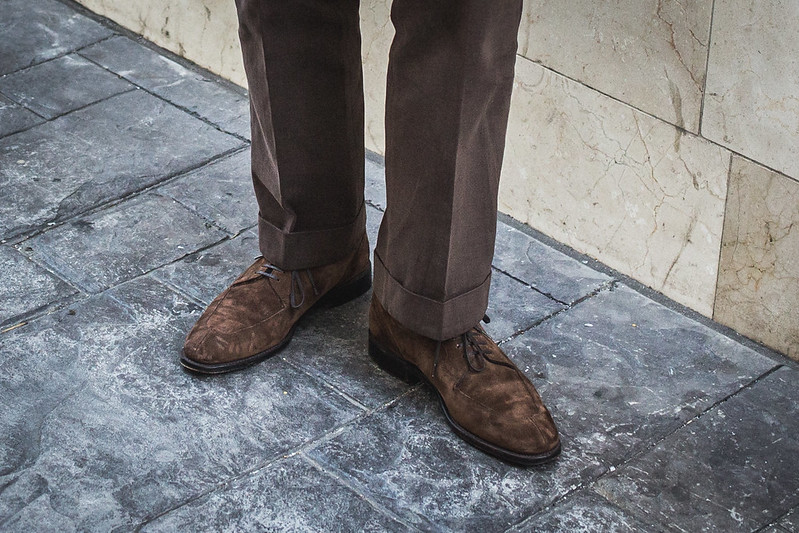 I think that the Haijame last actually gives my feet a flattering silhouette rather than making them appear too large (which was my fear). I haven’t yet worn them with wider leg trousers, but my stoffas are 8.25″ wide, and they look perfect. 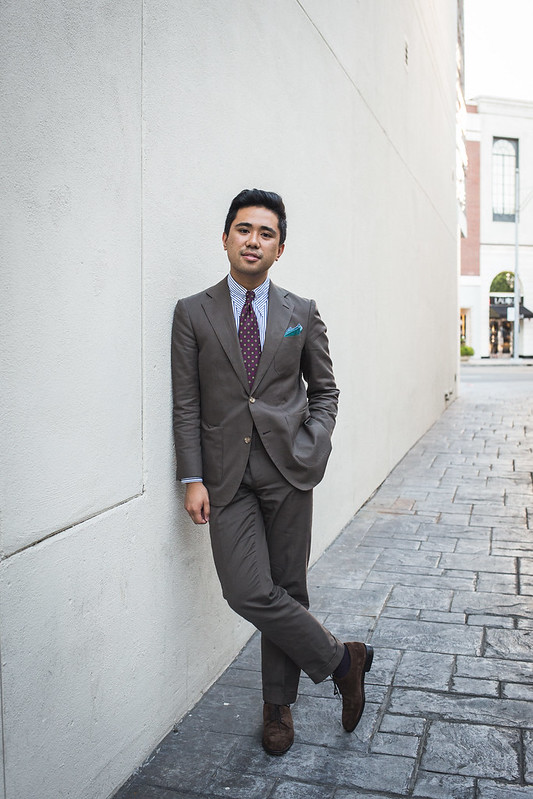 Obviously, I wanted to try the look with a suit.  Some people don’t like derbies with suits, but I wasn’t too concerned, since my suits have a casual nature  anyway.  As it’s still raging mid to high 80s in Los Angeles, my brown-olive cotton suit is the perfect choice. The “casual” derbies are a great match for the suit, providing a dark anchor and mixing well with the casual overall nature. Wrinkles in the suede echo the wrinkles in the cotton. 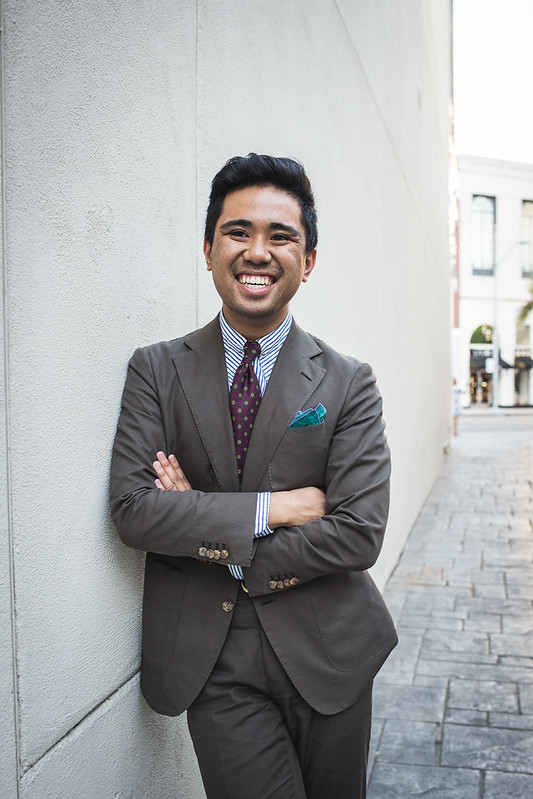 Even though it’s a casual suit, I decided to give it some decidedly “dressy Ethan vibes”. This means a striped (and pinned) spearpoint with a patterned tie for an updated 30’s look.  With the fun pocket square (a rarity) and suede shoes, I felt very Michael Hill.

Speaking of Michael Hill, this tie is actually my first ever Drake’s tie purchased on sale during my NYC trip. It’s a wonderful foulard and has a handrolled-edge construction, echoing the untipped hems of a 1930’s tie.  It makes a very narrow knot and works well with my style despite being a modern made piece. The color is also very striking, being somber with it’s deep burgundy/purple; I can’t wait to wear it with my fall/winter outfits! 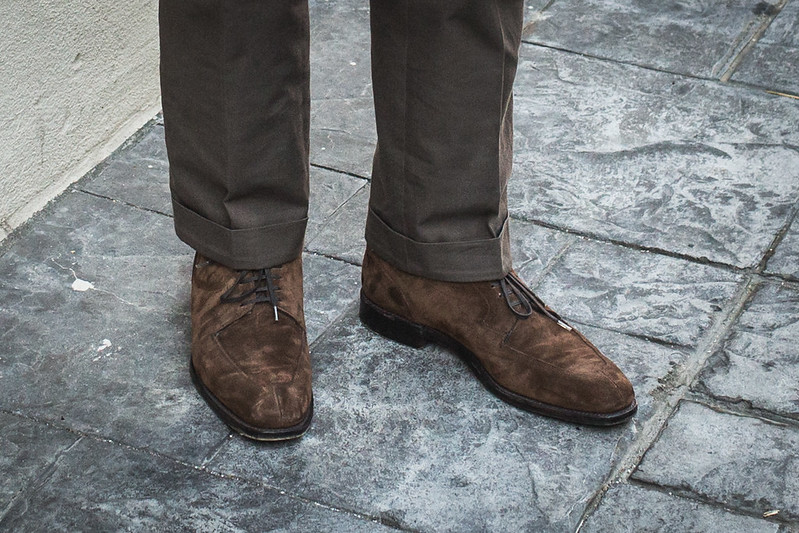 The cotton suit (made by Suit Supply) is actually one of my most narrow suits. I was a little concerned with how the slim width (a little over 7.5″) was going to work with the chisel toe, but it worked out fine. Even if it does seem a little large, the best thing to do is not care!  I love these shoes; wearing them proud is the best way to “pull them off”.

As if it was even a challenge to “pull off” a classic piece like a suede split toe.

It’s funny to see how things have progressed with this blog.  I may have been known for vintage and thrifting (and I still do occasionally), but I rather like that I’ve matured a bit and have gotten myself into a position where I can afford to buy things new.  For a long time, I always wondered what it would like to buy a new shoe let alone one designed by Yohei Fukuda and sold by the Armoury.   It’s good to treat yourself once in a while, as the feeling, especially in classic menswear, is certainly a jubilous one (pun definite-qui intended).

I’m very pleased with these shoes. The Jubilees were initially challenging to wear due to their elongated, chisel last but I’ve gotten to be pretty comfortable with wearing them, whether it’s with tailoring or with denim.  I’m trying not to be too protective over them even though they are expensive; I just really like the look of beat up suede.  I think that I’m definitely going to be wearing these shoes a lot when it gets colder.  Suits like my Brooks sack or the Camoshita (or some upcoming commissions) will be perfect!

Ya’ll should really try these shoes for yourselves if you’re in HK or NYC.  The Jubilees really are my favorite from their collection. With that said, I really hope they go for a rounded toe in the future, as I’m much more comfortable with that last. The main thing I’m scared of is if I’m going to be hooked on new shoes.  I just may have to go deep in the hole for some shell cordovan Aldens next time around…